Tesla Motors (NASDAQ:TSLA) Model X likely had many investors worried earlier this year. Not only did the SUV launch late in the first place, but the vehicle proved to be difficult to manufacturer. As Tesla started to ramp up Model X production during the first half of the year, supplier shortages and production quality issues caused Tesla to miss its vehicle guidance for both Q1 and Q2. 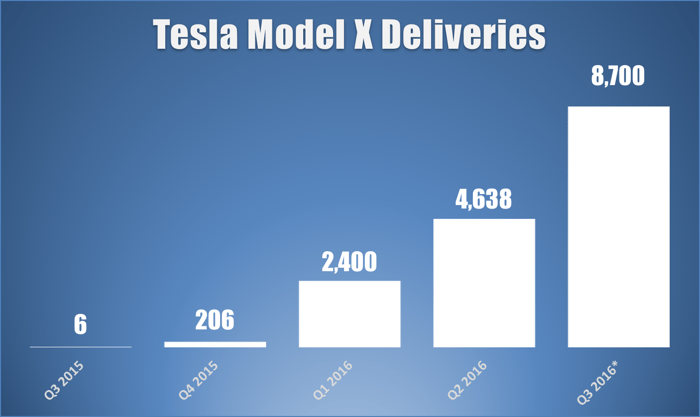 Falcon wing doors can be produced in mass after all.

As Tesla ramps up Model X production, some investors might be wondering just how high deliveries of the new SUV could go from here.

Fortunately, Tesla has provided some clues about demand for Model X, as well as made some projections for where it believes Model X deliveries are headed.

Here's what management has said about its expectations for Model X:

With Tesla only recently beginning to ramp up its marketing efforts for Model X -- and in light of Tesla's own internal aim for Model X deliveries to rival those of Model S -- Tesla could deliver around 12,500 Model X units in the final quarter.

Over the next few quarters, therefore, investors will finally see how high Model X deliveries really can go without production constraints. Can Model X live up to management's high expectations?