Talk about putting your money where your mouth is.

Marcus Lemonis, best known as the host and in-house investment guru of the business reality show The Profit on CNBC, is about to make a big leap with his own company. That enterprise, Camping World Holdings, is set for its initial public offering on Friday, Oct. 7. Is the move well-advised? Let's try to answer that question.

Camping World Holdings' name might conjure images of someone pitching a tent and roasting dinner over a blazing fire.

But the company doesn't position its business that way. In its words, it believes "we are the only provider of a comprehensive portfolio of services, protection plans, products and resources for recreational vehicle ("RV") enthusiasts." Camping gear is only one part of this portfolio.

The company estimates that around 9 million households across this country own an RV; out of that number, it counts roughly 3.3 million people as "active customers." That is a generous definition as it essentially means those who have purchased a good or service anytime in the two years preceding the measurement. 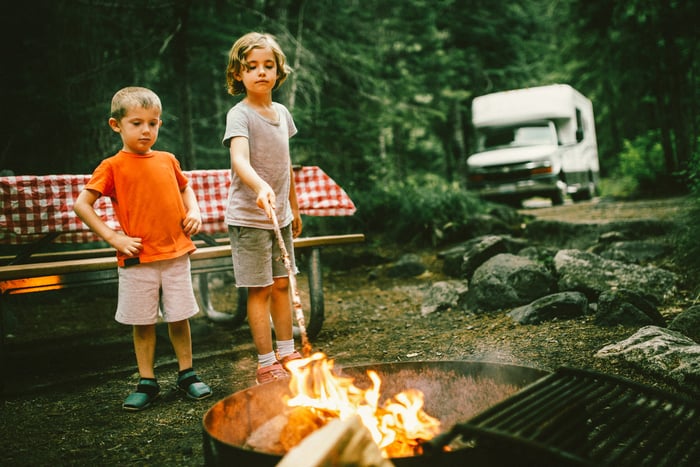 Regardless, Camping World is certainly a player in the RV space. It says it has the largest network of RV-focused retail locations in this country, with 120 such outlets spread across 36 states as of this past June.

It's shown encouraging growth on the top and bottom lines over the past half-decade. Its predecessor company managed to increase annual revenue consistently, growing it from $1.36 billion in 2011, to $3.33 billion in 2015.

Net profit drove a more jagged path, but the company nevertheless stayed resolutely in the black. Over the same stretch of time, that line item ranged from $5.4 million in 2011, to $178.5 million last year.

The RV market as a whole has been on a tear since the end of last decade's Great Recession. Unit shipments in the category -- which includes motor homes, and towable crafts like camping trailers -- have risen every year since then, rather dramatically on some occasions.

According to the Recreation Vehicle Industry Association (RVIA), this tally amounted to 374,246 units in 2015 -- a nearly 5% increase over the previous year, and the highest figure in nearly a decade. The RVIA is forecasting growth of 6% next year, before a deceleration to 2% in 2017.

Even if the RVIA's projections of slowing sales are reasonably accurate, Camping World still stands to do well. It focuses on the sale of parts, accessories, and services, after all, so it can probably weather a decline better than purer-play manufacturers Winnebago and Thor Industries.

Both of those stocks, by the way, are heading sharply north. Thor very recently closed at its all-time high, while Winnebago is trading at levels not seen since the late 2000s.

So investors are, understandably, very bullish on the RV segment in general just now -- meaning that Camping World has timing very much on its side with this IPO.

We shouldn't be surprised, then, to see plenty of interest in this new stock when it hits the market.

Nearly 11.4 million shares of Camping World will be sold in the company's IPO, at a price of $21 to $23 per share. The stock will hit the New York Stock Exchange this Friday, under the ticker symbol CWH.