Why are solar companies going out of business as the industry grows? The explanation is fairly simple, and it may continue to happen over and over again.

There may not be a business with a higher potential than the solar industry has today. The sun provides enough energy to the earth every hour to power everything that consumes energy for an entire year, and if we can capture just a fraction of that potential, it would change the world. And that could upend a $4 trillion energy industry. 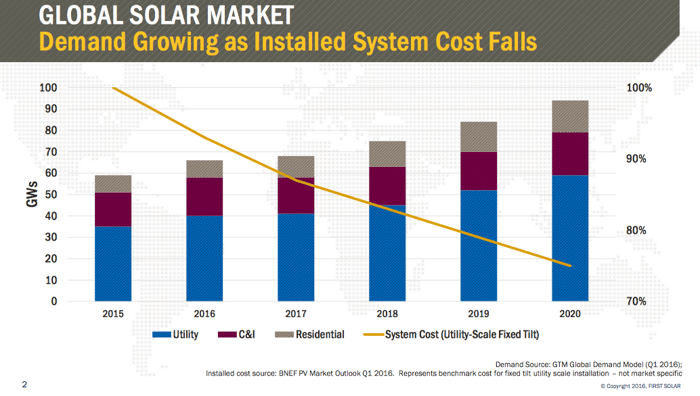 However, as the cost of solar falls and the number of solar installations grows, solar companies continue to struggle -- and even go out of business. In just over a year, First Solar (FSLR -0.59%), SunPower (SPWR -1.85%), and SolarCity (SCTY.DL) have seen their stocks plunge, and SunEdison has filed for the biggest U.S. bankruptcy of the year. How does this paradox of broad industry success and specific company failure make sense? 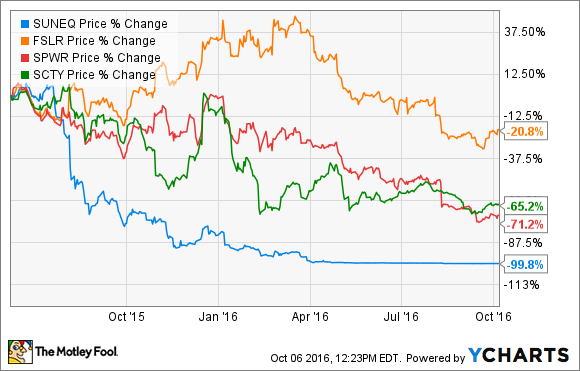 One thing that's been amazing about watching the solar industry over the past decade is the number of manufacturers that have gone out of business. One major driver has been costs; they are falling so fast that by the time a plant is completed, the world has changed around a manufacturer (think Solyndra), and their cost structure might be obsolete.

Consider Canadian Solar (CSIQ -1.75%), one of the world's largest solar manufacturers. The company recently said its costs have fallen from $1.32 per watt in Q2 2011 to $0.39 per watt in Q2 2016 for internally produced solar panels. But even that may not be enough to make money. Last quarter, the company made just $40.4 million of net income on 1,290 MW of solar panels produced, or a margin of about $0.03 per watt. Since the end of the quarter, industry reports of panel prices falling $0.10 to $0.15 per watt to less than $0.40 per watt have emerged, which means Canadian Solar could be losing money by the end of 2016. One of the biggest, lowest-cost manufacturers is essentially selling product at cost. That's where solar manufacturing is today.

This dynamic has played out over and over again as companies build manufacturing plants (usually with borrowed money) with projections of one cost structure and watch panel prices plunge faster than expected. The result is a loss on every panel made, something that has plagued Suntech Power, LDK Solar, Yingli Green Energy, Q-Cells, and many others who have become insolvent.

Demand for solar panels is growing, but the falling cost of panels is literally killing manufacturers.

Why developers are having trouble making money 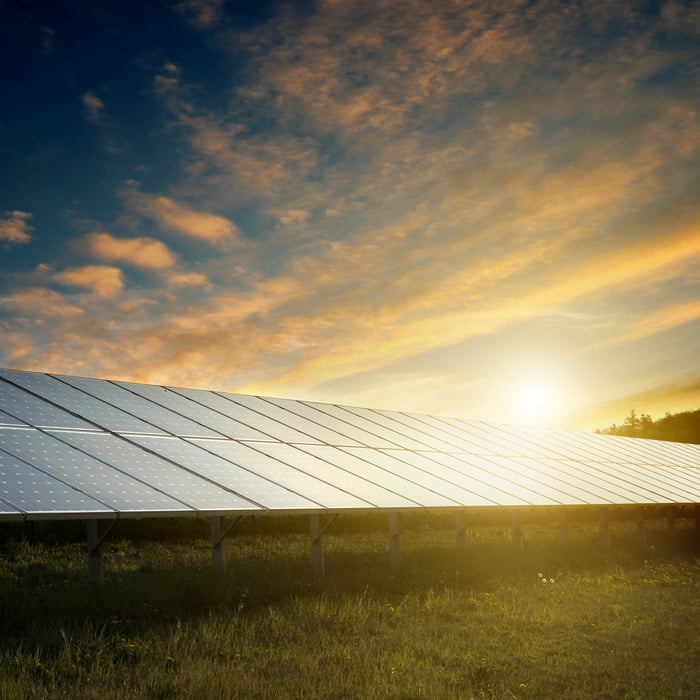 The problem is that developers both love growth and are in constant need of financing. SunEdison and SolarCity are two great examples of companies who loved growth and invested heavily in expanding their businesses. This meant expanding sales and engineering staffs, which are fixed costs, which then put pressure on keeping more and more projects in the development pipeline.

To fund the growing pipeline of projects, solar developers are in constant need of financing. And if that financing dries up, they can quickly be in trouble. Look at how quickly SunEdison went from a $10 billion market cap to bankrupt, or how quickly SolarCity went from a hot stock to needing a bailout from Tesla Motors (TSLA -0.84%), and you'll see how the collapse of financing affects companies.

These high operating costs and financing needs then bump up with the competitive reality of developing solar projects. Solar is a growth industry, and everyone wants a piece of it, so companies are willing to take lower and lower returns just to win business. Consider Mexico, where in April 2016, a bid for solar projects came in at 5.07 cents per kWh. By September, the bids were down to 3.35 cents per kWh as developers accepted lower and lower returns on projects.

Solar developers are effectively bankrupting themselves by getting big eyes when it comes to growth, and then dueling each other to achieve that growth. The result is very little in the way of profit.

Is there a sustainable future ahead?

Will solar stocks ever be a good investment with healthy returns? It's possible, but more disruption is ahead.

For solar companies to differentiate themselves, I think there needs to be a focus on differentiation, and eventually a sustainable cost advantage driven by that differentiation. Higher efficiency, for example, should lead to lower land, labor, and other costs, leading to a competitive advantage if that efficiency is low-cost enough. First Solar and SunPower are operating on the efficiency-as-differentiation thesis.

Another way to differentiate is through smart energy solutions. Homeowners and utilities are increasingly valuing solar and energy storage that can provide multiple sources of value to the grid, and the algorithms that control the system will be a key differentiator. SolarCity, along with Tesla, see this as a way to differentiate themselves.

The problem with this differentiation thesis is that it will take time to play out -- if it plays out at all. Today, commodity solar panels are the dominant product, and developers are popping out of the woodwork trying to take some market share. And both sides are willing to scrape by just to stay in business. That's what differentiated solar products are up against.

With solar panel prices down 20%-25% in the last few months, and the cost of financing rising for some developers, we'll likely see more solar companies go out of business in the next two years. Whether or not that leads to a more sustainable industry or not -- only time will tell. If it does, the upside will be tremendous for the winners.

Travis Hoium owns shares of First Solar and SunPower. The Motley Fool owns shares of and recommends SolarCity and Tesla Motors. Try any of our Foolish newsletter services free for 30 days. We Fools may not all hold the same opinions, but we all believe that considering a diverse range of insights makes us better investors. The Motley Fool has a disclosure policy.