Tech stocks tend to be more volatile than those in other sectors of the market, but they also offer comparatively high growth and earnings potential that can translate into big gains for your portfolio. The importance of technology has helped the sector replace financials as the largest component of the S&P 500, and the impacts that tech advances have on nearly all aspects of life set the stage for tech companies to deliver some of the most impressive growth stories of the next decade. So while some investors might choose to avoid tech stocks due to the associated risk and volatility, it's advisable to have the sector represented in your holdings.

To help generate ideas for investors who are on the hunt for potential tech stocks to buy in October, we assembled a team of three Motley Fool writers and asked each to profile a top company in the sector.

Don't fixate on past prices with this social media king

Brian Stoffel: One look at Facebook's (NASDAQ:FB) stock chart and you could be forgiven for thinking that you've missed the boat. 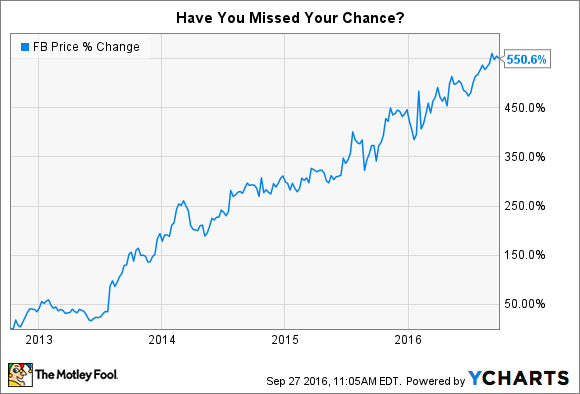 But don't get caught up in regret, or you'll miss out on the chance for even more potential upside. Consider this: According to analyst estimates, the company is expected to pull in $8.03 per share in 2019. Although Facebook trades for 41 times trailing earnings, it's currently trading for just 16 times what analysts expect it to earn in 2019.

I can hear bears saying right now that we shouldn't count on analyst estimates to make a buying decision. Those detractors have a point. However, in all but one of the company's last 15 quarters, Facebook has exceeded earnings expectations.

That shouldn't be too much of a surprise. With its flagship Facebook site, as well as its Instagram photo-sharing service and WhatsApp messaging app, the company has hundreds of millions of users to monetize. It has already shown how dominant it can be pulling in ad dollars on Facebook, so it will be exciting to see what can happen with Instagram -- and then WhatsApp -- over the next decade.

The company has the benefit of a young and visionary CEO at the helm, and I think buying shares of Facebook in October would be a move that would be considered prescient a decade from now.

Tim Brugger: With its stock price near 52-week highs, it may not seem like Adobe Systems (NASDAQ:ADBE) warrants a spot on a list of top tech stocks to buy now. Yes, shareholders have enjoyed a nearly 14% jump in share price over the past three months, but digging a bit deeper makes it clear Adobe is just scratching the surface of its growth potential.

Adobe announced record sales in its recently completed fiscal 2016 third quarter, the 10th consecutive time it's done so, and it's expecting another record-breaking result this quarter, too. Adobe's 20% increase in revenue, to $1.46 billion, and whopping 59% jump in earnings per share, to $0.54, last quarter were impressive, to be sure. But it's how Adobe is changing its revenue model for the long term that is most enticing.

CEO Shantanu Narayen has shifted Adobe's business focus to growing annual recurring revenue (ARR) rather than relying solely on new product sales. Adobe went so far as to make the process of buying its industry-leading design software outright cumbersome in order to encourage customers to opt for its subscription alternatives, all delivered via its creative, document, and marketing clouds. And it's working.

Due to strong results from its creative and document cloud units, Adobe's annual recurring revenue run rate soared to $3.7 billion last quarter, and total subscription revenue jumped 41%, to $1.17 billion. Increasing recurring revenue builds a solid, relatively stable foundation for long-term growth, and Adobe is still in the early stages of getting its ARR engine revved up.

Keith Noonan: Keeping with the theme of high-flying companies that still have room to run, I'm spotlighting Take-Two Interactive (NASDAQ:TTWO) as a tech stock to buy this month. While the video game publisher with a roughly $4 billion market cap trades near lifetime highs and has gained more than 240% over the last five years, the trends propelling its incredible results suggest that it still has plenty of growth potential.

The video game industry is still expanding at a healthy clip, with accounting firm PricewaterhouseCoopers estimating that the American games market will have grown 3.7% annually from 2015 to 2020, and Take-Two's strong lineup of licensed and original properties puts it in good position to benefit from the momentum. At the heart of the games industry growth is another trend that's favorable for the company -- the rise of revenue from digital content. Gamers are increasingly buying their games digitally and spending more on in-game purchases, and these shifts result in better margins for video game companies and look poised to continue. In Take-Two's most recently reported quarter, recurrent digital consumer spending grew roughly 18% year over year and represented 31% of net revenue.

The rising popularity of in-game purchases means that Take-Two is extending the sales life of its releases through updates that cost substantially less to develop. Grand Theft Auto 5, the most recent release in the company's core property, is estimated to have brought in around $700 million in sales over the last 12 months, with a large portion of that revenue coming from downloadable content purchases. The digital shift and staying power of its big releases have helped the company beat earnings expectations in each of its last four reporting periods.

With beneficial trends in its industry and a lineup of strong properties, Take-Two looks to have the makings of a long-term winner.