Investors in the clinical-stage biotech Ophthotech (NASDAQ:ISEE) had a rough September. Shares fell by more than 16% during the month, according to data from S&P Global Market Intelligence. 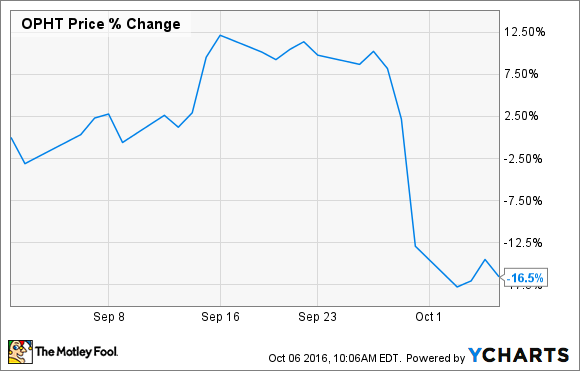 While Ophthotech's lead compound Fovista was not used in this study, traders now have a renewed worry that anti-PDGF drugs like Fovista might not improve upon current standards of care. In response, they sold off the company's shares.

While it's tempting to look at this data and conclude that Fovista is dead in the water, I think it's still too early to draw any real conclusions. After all, Phase 2b studies showed that adding Fovista to Novartis' Lucentis lead to a 62% improvement in eyesight when compared to using Lucentis as a monotherapy. If the company can repeat those results when they release data from a Phase 3 study in the upcoming months, then these renewed fears will likely to put to rest. In turn, I'd expect the company's shares to soar.

Of course, if Ophthotech's updated data suggests that anti-PDGF drugs do not lead to a clinical benefit, then look out below. That makes Ophtotech a high-risk, high-reward stock that should only be owned by shareholders who are willing to face a significant binary event.