The top 10 stocks of 2019 are an interesting group. You might think tech stocks would dominate the upper echelon of equities, but you'd be wrong. As we saw in the IPO market, individual healthcare stocks actually had the strongest returns last year. Seven biotech companies made our list, including the No. 1 stock, which had a stratospheric 3,578% return in 12 months. A medical device company had a fantastic year as well. Rounding out the field is a website for finding the best insurance rates, and a retailer. 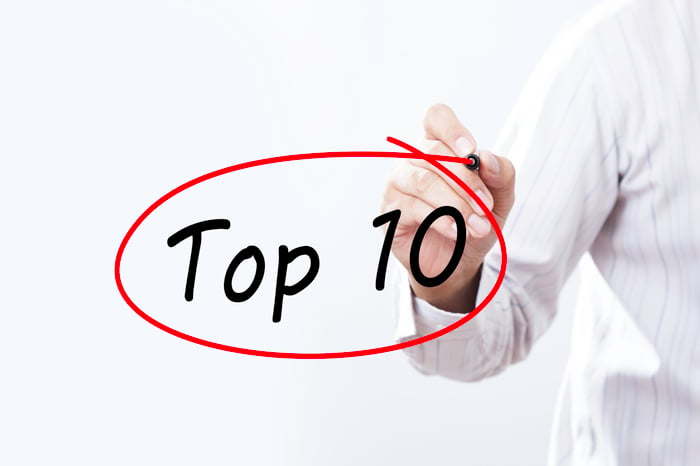 It was a rocket ride last year for investors in ArQule (NASDAQ:ARQL): up, down, and into the stratosphere. The precision medicine biotech has a pipeline that is focused on cancers and rare diseases. The small-cap stock started the year at $2.75. In December, Merck agreed to buy the company for $20 a share.

IVERIC bio (NASDAQ:ISEE) used to be called Ophthotech. The company has always focused on eye drugs, with very little success. It went public in 2013 with its shares priced at $23.06. After a couple of phase 3 failures, IVERIC dropped down to a micro-cap level, bottoming out at under $1 a share.

A positive readout from a phase 2 trial of its eye drug Zimura in late 2019 was enough to boost the stock substantially. In two months, the company went from a penny stock all the way up to over $8 a share, and a market cap of $357 million.

Durect (NASDAQ:DRRX) is a small-cap specialty biotech that is focused on pain drugs and stopping opioid abuse. In July, the stock started to jump when an English biotech, Indivior, got approval for a drug it licensed from Durect. In September, Elemer Piros, an analyst at Cantor Fitzgerald, initiated coverage of Durect with a price target three times higher than the share price; the stock shot up.

In December, the stock really took off as the market got excited about Posimir, the company's pain drug. The Food and Drug Administration scheduled an advisory committee meeting for Jan. 16 to review the company's application.

Avita Medical (NASDAQ:AVMXY) is a medical technology company in Australia that is focused on regenerating skin for burn victims. The small-cap company ($868 million) is seeing astronomical revenue growth off of a very small base. Revenue jumped from $1.1 million to $7.7 million in the most recent quarter, year over year. Motley Fool Australia reports this was the strongest stock in Australia for 2019. The company's solution was cleared in the U.S. by the FDA in late 2018. Analysts estimate the total addressable market to be around $2 billion.

EverQuote (NASDAQ:EVER) has a terrific platform with powerful network effects. The small-cap is striving to become the largest online source for insurance rate quotes. The company is partnered with several major insurers, including Progressive, Travelers, Nationwide, MetLife, Farmers, and Liberty Mutual. Revenue growth is 61% year over year, and the company just attained GAAP profitability. And the stock is still cheap, with a price-to-sales ratio of 4.

Provention Bio (NASDAQ:PRVB) is another small-cap biotech with a giant return for investors in 2019. Provention is focused on the diabetes space, a sizable $57 billion market opportunity. It has an amazing drug in phase 3 trials that delays or even prevents Type 1 diabetes from occurring in at-risk patients.

The risk-reward ratio is very attractive here. Provention's market cap is slight ($710 million), while its market opportunity is huge. The stock has doubled since November. And yet the market still seems to be underestimating how big this opportunity is.

Kodiak Sciences (NASDAQ:KOD) had its IPO back in 2007, and the stock has been underwater ever since. The biotech has no approved drugs, no earnings, and no revenue. And pessimism was very high. All that changed with the progress of its promising eye-disease drug, KSI-301, in advanced clinical trials. The data was so good, the company was able to sell a royalty right to Baker Brothers Advisors for $225 million. In a matter of months, Kodiak's market capitalization shot up to a $3 billion valuation.

Stage Stores (NYSE:SSI) is one of the big turnaround stories of 2019. The retailer's stock performed horribly for a long time. The share price was $28.73 in 2013, but over the next six years, it was in free fall, dropping all the way to $0.66 a share in August 2019. And then the company announced an upbeat earnings report and the stock shot up.

The next quarter was actually stronger. CEO Michael Glazer said:

Sales were the strongest for any third quarter ever in our history. Comp sales were positive every month and sequentially grew each month. Merchandise margins improved by over 100 basis points.

The company still has a lot of debt and is not completely out of the woods. But it definitely seems like it's on an upswing. In November, the company reported its first profitable third quarter (EBITDA) since 2015. And that's why the stock ran up 941%.

Like the rest of the stocks on this list, Constellation Pharmaceuticals (NASDAQ:CNST) was trading under $10 a share at the beginning of the year. In fact, shares opened at $4.04 on the first trading day of 2019. That price had the cancer specialist down 61% from its IPO six months earlier.

The stock rebounded early in the year for a quick double. But when Constellation reported good news from its phase 2 clinical study of CPI-0610, a drug for myelofibrosis, the stock really took off. It was a quick eight-bagger in two months.

Axsome Therapeutics (NASDAQ:AXSM) has been an astounding stock all year long. The main driver is that the scientists at Axsome figured out a sneaky way to get its anti-depression (and anti-smoking) drug past the blood-brain barrier (BBB). Wellbutrin, a popular anti-depression drug that is off patent, has trouble passing the BBB. This means that only slight traces of the drug actually reach the brain, limiting its effectiveness.

The active agent in cough syrup, dextromethorphan, easily passes the blood-brain barrier. Axsome's insight was to take the two drugs and combine them into a cocktail. Piggybacking on the cough syrup, more of Wellbutrin reaches the brain, making it more effective. Just like that, the company discovered a new drug for depression, one that is superior to Wellbutrin alone.

Even better, Axsome could rely upon prior trial data since both Wellbutrin and cough syrup are already on the market. This means that Axsome has been able to zoom its billion-dollar molecule through clinical trials at an incredibly rapid pace.

So here's how each of these 10 stocks started and finished 2019:

While these stocks all had huge runs in 2019, for the most part they remain small caps and have plenty of room to grow. Many of them are valued under $1 billion. And the largest of them, Axsome, is still under $4 billion. While there will no doubt be some profit-taking in January, the long-term future of several of these companies appears bright.

In particular, EverQuote looks like a fantastic business that investors want to keep an eye on. Axsome and Durect are optimistic about possible drug approvals in 2020. And Provention Bio seems profoundly undervalued compared with its outsize market opportunity.