Please ensure Javascript is enabled for purposes of website accessibility
Log In Help Join The Motley Fool
Free Article Join Over 1 Million Premium Members And Get More In-Depth Stock Guidance and Research
By Mark Prvulovic - Nov 7, 2019 at 9:06AM

There are some highly promising diabetes treatments entering the market that investors should know about.

There are plenty of exciting areas in the biotech world for investors to consider right now. One of the most promising niches is in the world of diabetes treatments, where a number of biotech companies are on the cusp of developing new solutions to the disease. There are 425 million adults worldwide living with the condition, and the figure is expected to increase to 629 million by 2045. As such, demand for potential diabetes treatments will continue to grow significantly in the years to come.

While there are a number of biotech companies focused on developing their own diabetes solutions, a few stand out from the competition. Provention Bio (PRVB 4.94%), Tandem Diabetes (TNDM 4.75%), and Eli Lilly (LLY 4.12%) are all companies working on promising diabetes solutions that investors should watch out for in November. 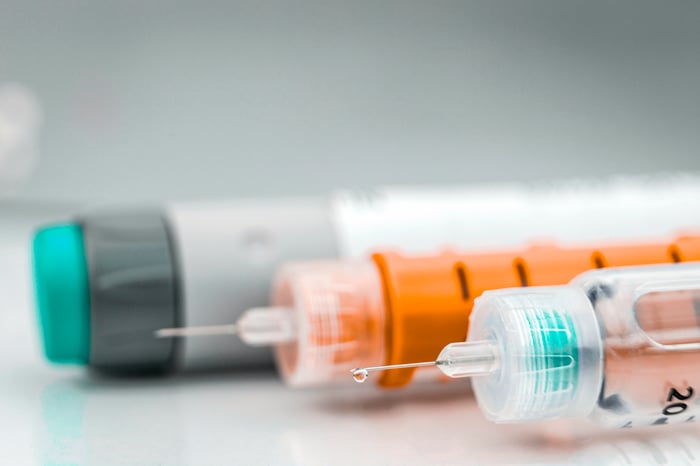 The smallest company on this list, with a market cap of just $304 million, Provention Bio has been developing a number of drug candidates for various autoimmune disorders. The most promising, however, is Teplizumab, a drug that aims to treat the onset of Type 1 diabetes. In June, a phase 2 clinical trial showed impressive results for Teplizumab. The data showed that using Teplizumab could significantly delay or even prevent the onset of Type 1 diabetes in patients who otherwise were certain to progress to full-blown diabetes.

"It's remarkable to see that a single course of two-week therapy cut the incidence of diabetes by almost 50% during this trial," said Jeffrey Bluestone, a director of Provention Bio, in response to the results.

Since then, Provention has announced that the company would meet with the U.S. Food and Drug Administration sometime in Q4 2019 to see if it could receive a biologics license application, which would help accelerate the drug's development and eventual use.

Following the launch of this newer and improved pump, sales have been increasing drastically. In Q2 2019, insulin pump shipments increased by 290% worldwide to 21,258 pumps, in comparison to 5,447 from Q2 2018. Sales have grown by 173%, from $34.1 million to $93.3 million, while Tandem's operating margin has improved from negative 41% to just negative 2% during this one-year period.

With financial metrics across the board showing significant improvements, the future prospects for Tandem Diabetes remain strong for now. The biggest risk Tandem faces comes from other diabetes drug treatments that could be developed in the years to come. Until then, however, Tandem's future seems bright, with current estimates showing little sign of any sales slowdown over the next 12 to 24 months.

The largest company on this list, with a market cap of $109.4 billion, Eli Lilly is a giant that has its hands in many different healthcare markets, diabetes being just one. However, investors were disappointed in the company recently. Even as it posted solid quarterly financial results and raised its guidance, sales of diabetes drug Trulicity isn't seeing explosive growth. Not that sales were bad: Revenue from the treatment had gone up by 24% from the previous quarter to $1.01 billion. However, that figure fell short of Wall Street's ambitious $1.08 billion price target.

The enthusiasm behind this treatment has been growing since Eli Lilly released results that showed a 12% reduction in the risk of adverse cardiovascular events such as heart attacks, which diabetes patients are at higher risk of developing. Trulicity recently received a recommendation from the EU's European Medicines Agency's Committee in September, a major thumbs up for the drug which only further strengthened investor's already strong expectations.

The main issue that Eli Lilly faces comes in the form of a new, one-per-day diabetes pill, Rybelsus, being developed by Novo Nordisk. Trulicity is a once-per-week injection, and some industry experts wonder whether the convenience factor of not needing to take an injection anymore could lead to Rybelsus taking away market share from Eli Lilly's drug.

However, there are some potential downsides that come with Novo Nordisk's new drug. A recent report from the Institute of Clinical and Economic Review (ICER) stated that from a cost-effectiveness standpoint, Rybelsus is still more expensive in comparison to other diabetes treatments. This difference gets exacerbated when taking into consideration the increased prevalence of certain side effects that emerge from taking the drug. The most noteable side effects include higher rates of gastrointestinal issues as well as cardiovascular complications such as congestive heart failure.

At this point, there's still a strong case to be made in favor of Trulicity over its competitors, although this can definitely change in the future. Until then, investors shouldn't pass over Eli Lilly's position in the diabetes market.