Shares of NXP Semiconductors (NASDAQ:NXPI) rose 15.9% in September 2016, according to data from S&P Global Market Intelligence. As of Sept. 28, the stock had fallen 7% month to date. Then, reports of industry giant Qualcomm (NASDAQ:QCOM) considering a buyout bid for NXP changed the game overnight. The stock closed nearly 18% higher that afternoon, and added another 8% the next day. 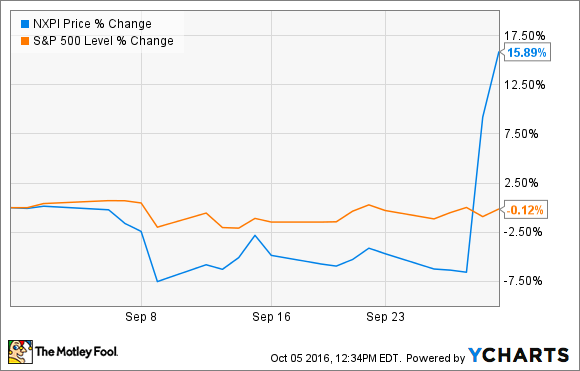 The initial Bloomberg report, citing the usual unnamed insider sources, also claimed that NXP had hired Frank Quattrone's Qatalyst investment firm to drum up a bidding war. Several other potential buyers were named, but Qualcomm remains the most likely buyer in a deal worth at least $30 billion.

The insiders admitted that the talks between Qualcomm and NXP are still very early and might not lead anywhere. But if the rumor is followed by a real announcement, this would be one of the largest acquisition deals in the history of semiconductors.

Qualcomm is sitting on a $30 billion pile of cash and investments, itching to put it to good use. Buying NXP would certainly fit the bill, adding healthy growth markets like data security and automotive computing to Qualcomm's narrowly focused portfolio of communications products.

Then again, it would also drain Qualcomm's cash reserves while adding new debt and dilute the stock owned by current shareholders. It would be a bold move, but also a risky and difficult strategy shift.

Qualcomm (and other rumored bidders) could indeed end up buying NXP in the near future, but I wouldn't be surprised to see the talks fall apart, either. NXP is a fine company and a quality stock, but I'm staying on the sidelines until these elevated share prices calm down a bit. Trading near 52-week highs thanks to rumors of an uncertain deal, NXP stock currently comes with more downside risk than upside potential in the short term. And true long-term investors won't mind waiting for a better entry point.