During the Oct. 5 trading session, shares of microprocessor giant Intel (NASDAQ:INTC) hit $38.31 per share -- a high it hasn't seen since the dot-com bubble burst. At this point, current and potential Intel shareholders are probably asking themselves the following critical questions:

In this column, I'd like to offer up some answers from the perspective of somebody who has held Intel stock for years now.

The bulk of Intel's revenue has historically come, and still comes, from the first group. In 2015, for example, Intel's client computing group (which consists primarily of personal computer chip sales) took in $32.22 billion in revenue -- approximately 58% of the company's top line for the year.

Even though Intel has made it clear that it's building its business to be able to deliver some level of growth even if the personal computer market continues to decline, the better this segment does, the better it is for Intel, its financial performance, and ultimately, its stock price.

I believe the momentum the stock is enjoying is driven in no small part by the company's positive earnings pre-announcement due to better-than-expected personal computer chip sales.

Is the current price justified?

As of this writing, Intel stock most recently closed at $38.07 -- just off of the new highs made earlier in the week. At that price, shares trade at about 18 times trailing 12-month earnings -- certainly at the high end of where it has traded over the last five years: 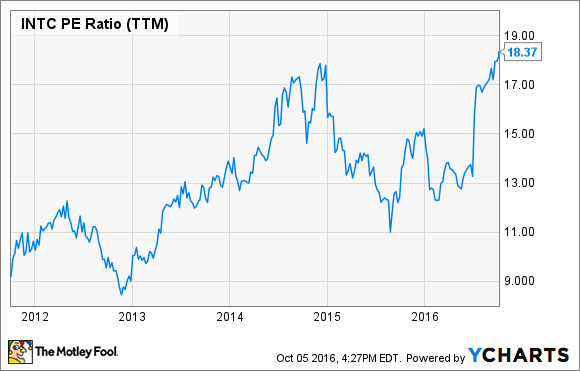 However, it's not hard to argue that the company's prospects today are probably brighter than they've been in a long time.

Intel has also ramped up its research and development spending quite substantially over the last five years in order to allow the company to better capitalize on new growth opportunities (though not all of them, such as smartphone/tablet platforms, have worked out) and to defend market share in its core operating segments. 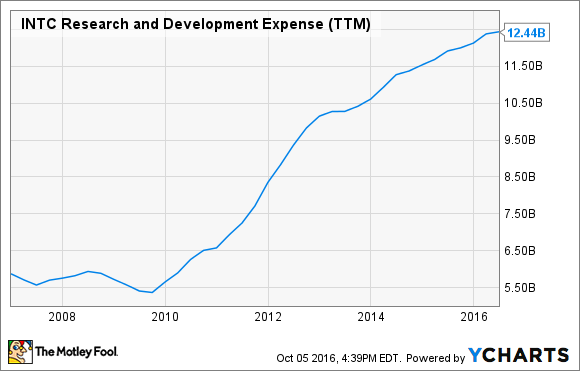 All told, I wouldn't hesitate to argue that Intel shares deserve the richer earnings multiple they command today.

At this point, current investors as well as potential investors are likely interested in the answer to our final question: How much, if any, upside is there left in the stock?

I suspect that how the shares perform over the next year or so will be largely governed by the following factors:

I suspect the answer to the first point will be "yes". Intel's product portfolio in the data center market is currently strong, and I expect the company's 2017 product line will only strengthen that position -- helping to support both the unit growth and average selling price growth story that has driven this business segment for quite some time.

Perhaps the bigger unknown is how personal computer sales will hold up in 2017. Predicting this market has been tough in the past, and we've seen situations in which PC sales will do quite well in one year (Intel's PC business actually grew modestly in 2014) only to crater in the following year (it then contracted significantly in 2015).

If PC sales continue to hold up nicely, a share price of $43-plus (16 times the analyst consensus for Intel's earnings per share in 2017) wouldn't be out of the question. However, if PC sales start to reverse course, I'd expect the stock to stagnate, or perhaps even follow personal computer sales downward.