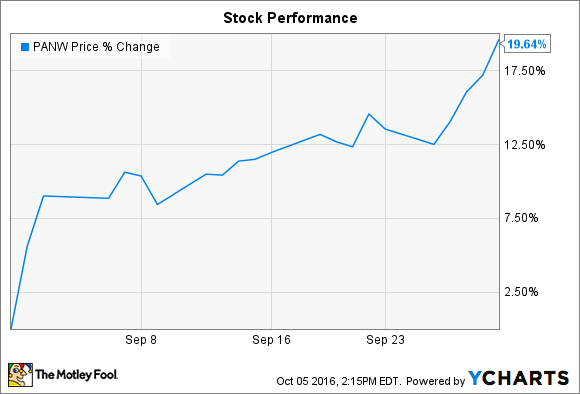 The rally hasn't pushed shareholders back into positive territory in 2016. However, the stock is up nearly 40% over the last three months.

Palo Alto's stock fell on the last day of August following the company's strong quarterly earnings results -- but then climbed higher through the month of September -- suggesting a change of heart on the part of investors.

After all, those results marked its ninth consecutive overperformance against consensus estimates. Revenue jumped by 41% and adjusted earnings spiked higher by almost 80%. Management boasted that the company was soaking up market share as enterprises move toward next-generation security solutions. "As the primary innovator driving this paradigm shift, customers are turning to our security platform in record numbers to more effectively prevent cyberattacks no matter where their data resides," CEO Mark McLaughlin said in a press release.

There are hard numbers to back up that optimism, too. Palo Alto's 41% sales jump and 45% billings gain far outpaced rival FireEye's (NASDAQ:FEYE) 19% revenue gain and 10% billings improvement. Both companies remain unprofitable from a GAAP standpoint, but Palo Alto's losses are at about half of FireEye's level.

McLaughlin and his executive team issued a somewhat conservative forecast for the current quarter that called for sales growth to slow to a 34% pace. Shareholders are used to seeing more robust numbers than that.

Yet, with FireEye projecting just 10% growth over the same period, it's clear that Palo Alto is seeing stronger demand and having more success at converting customers to its security platform.