Shares of casual dining restaurant chain Red Robin Gourmet Burgers (NASDAQ:RRGB) fell 10.6% in September 2016, according to data from S&P Global Market Intelligence. The dining industry at large wasn't exactly having a banner month, but Red Robin took a larger haircut than most due to a skeptical analyst note.

On Sept. 13, Red Robin fell as much as 5% in a single day. High-profile analyst firm Bank of America Merrill Lynch downgraded the burger chain from buy all the way down to underperform in one fell swoop. To be clear, the firm's target price for Red Robin was right in line with the stock's then-current pricing. But holding steady still counts as a poor investment if the firm expects the rest of the stock market to advance significantly. 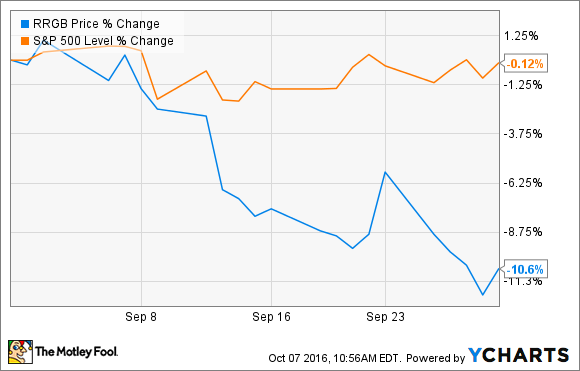 Red Robin's actions in early October haven't done anything to rebut Buckley's concerns. This week, the company officially gave up on its fast-casual restaurant experiment, closing nine of those 12 locations and remodeling the other three. The so-called Red Robin Burger Works stores never got any traction with fast-casual diners, and Red Robin will rethink its carryout and delivery strategies.

The stock has plunged 45% lower over the last 52 weeks, trailing far behind its casual dining rivals. The chain's revenue growth is stalling hard, earnings have been hit and miss in recent quarters, and Red Robin is burning cash at a growing rate.

CEO Denny Post has been on the job for less than two months, but she's a solid insider who previously served as president. Given that ex-CEO Steve Carley retired on good terms with minimal controversy, Post is unlikely to make any drastic changes to Red Robin's business model.

Honestly, I hope she proves me wrong. This brand isn't speaking to consumers these days, and the company could use some fresh thinking. Post's first full quarterly report is due in early November. Keep an eye on that event for some clues on where Red Robin is going next.