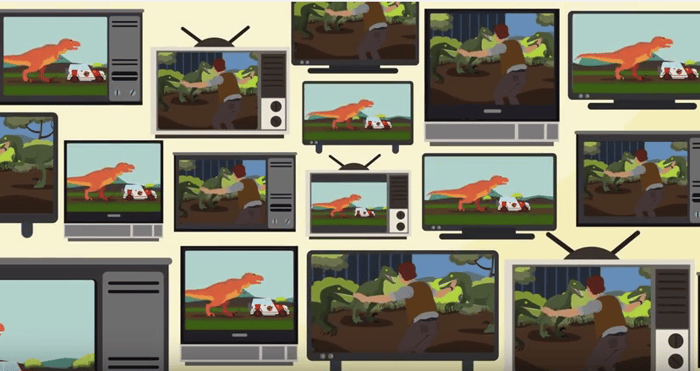 Screenshot from a Comcast video explaining what a terabyte is. Image source: Comcast.

Cable companies, like their wireless compatriots, seemingly enjoy taking something away while touting it to customers as a positive.

Like the coffee chains that push not putting milk or sugar into your beverage as a "you can customize it yourself" concept or the phone companies that point to data caps as some sort of guard that protects us all from data hogs, internet service providers (ISPs) like to sell a negative as a positive.

Instead of calling data caps what they are -- an attempt to leverage overage fees in the event data usage trends continue to move upward -- the ISPs putting caps in place want consumers to think they're doing them a favor. They're essentially saying, "We're not taking away your car. We're giving you a bus pass so think how much money you will save on gas."

That's the tactic Comcast (NASDAQ:CMCSA) has been using as it slowly rolls out data caps throughout its territory, adding them in 23 markets, according to data pulled from various company web pages by Consumerist. In many ways, it's a brilliant play, because as the company points out in a blog post announcing the caps, more than 99% of its customers don't exceed the 1-terabyte-per-month limit.

Of course, Comcast isn't worried about adding revenue today -- it's building for a future where it can charge people more long after they have given up the opportunity to be outraged or fight back.

What is Comcast saying?

The cable and internet giant makes its case to customers in a blog post headlined "You Can Do a Lot with a Terabyte of Data." Never mind that you can do a lot more with unlimited data. The company wants people to know that it's being very generous.

"A terabyte is a massive amount of data," wrote Eric Schaefer, the company's general manager of communications, data, and mobility services in internet. "More than 99% of our customers do not use 1 TB of data in a given month. But for those who do use more, we have options."

The company wants consumers to believe data caps won't impact them (which is true today, but probably not in the future). Then Comcast makes the same argument AT&T (NYSE: T) and Verizon (NYSE: VZ) have made for years to justify charging their wireless customers billions of dollars in overages. "Our data plans are based on a principle of fairness," wrote Schaefer. "Those who use more Internet data, pay more. And those who use less Internet data, pay less."

That sounds nice, but it's not really about fairness. Comcast wants to either keep people from switching from cable (which it sells) to streaming services or be able to make up the revenue it loses from cord-cutting by charging overage charges to people who will eventually use more than 1 TB of data after they cut the cable cord and switch to all streaming.

Comcast is being oddly magnanimous when it comes to the implementation of its new data caps. First, it plans to notify customers when they approach, reach, and exceed a terabyte, according to the company FAQ. Subscribers can also set up email or mobile notifications to alert them when they reach certain thresholds.

In addition, the company won't be charging people for the first two months in which they exceed the cap. "You will only be subject to overage charges if you use more than a terabyte for a third time in a 12-month period," the company wrote, noting that if you only go over twice in a year, the next year you will receive another two free passes. If a customer exceeds the cap three times in a 12-month period, no more courtesy months will be given.

On the third month a customer goes over, Comcast "will automatically add blocks of 50 GB to your account for an additional fee of $10 each," according to the FAQ, with total charges not to exceed "$200 each month, no matter how much you use."

Why this won't succeed

For many years, the wireless industry operated in lockstep and if consumers wanted access to any post-paid (contracted) plan with a Big Four carrier, they had to accept either paying overages or buying a plan bigger than they likely needed just to avoid them. T-Mobile (NASDAQ: TMUS) put an end to that by giving consumers an option by dropping all overages.

The rest of the wireless industry eventually had to follow (even though AT&T and Verizon are not completely there yet). Comcast's problem is that ISPs have not been on the same page the way the wireless carriers were for years. In many markets, the company has non-capped rivals, and not having caps will very likely be a selling point for new types of service being developed -- be they fiber, internet-carrying blimps, AT&T's power-line-delivered internet, or something else entirely.

Comcast has planned for a rainy day, but when that day finally comes, the public -- at least the ones with a choice -- will simply go elsewhere. This is a shortsighted hedge against cord-cutting (and paying for continued network improvements) that, if it pays off, will have a limited shelf life.

It's easy to see what Comcast wants to do and even why it wants to do it, especially since it worked so well for so long for AT&T and Verizon. The problem is that choice makes a tactic like this much less useful, and while it may take years in some markets, ISP choice has been expanding.