As one of the most successful companies in history, if not the most successful, Apple (NASDAQ:AAPL) has lifted the fortunes of many of its suppliers over the years, including such well-known examples as Foxconn and Harman International. That's why investing in Apple parts suppliers has frequently been a profitable strategy. However, given the iPhone maker's tendency to squeeze its vendors, succeeding in this strategy requires a detailed analysis of the those companies. Here are a couple of the best-positioned Apple suppliers to consider for your portfolio today.

This data provides only a superficial snapshot of these Apple suppliers, so let's investigate the investment thesis driving each of these names today.

It's hard to look at the newly combined Broadcom and not love what you see. Today's company is the result of last year's megamerger between semiconductor giants Broadcom and Avago. An active pick in at least one of the Fool's premium services, the new, post-merger Broadcom has emerged stronger and better positioned to thrive in our increasingly mobile and connected world.

Apple contributes over 10% of Broadcom's sales -- before the merger, 14% of Broadcom's and 10% of Avago's sales came from Apple. But Broadcom is by no means reliant on its Apple vendor business to drive its financial results. Its diversified chipset lineup includes radio frequency, wireless combo chips, broadband, and storage and networking chips, each catering to long-term secular growth markets in tech. That's why analysts expect Broadcom's sales to increase 91% this year and 22.8% next year. (The number is especially big this year because of the merger.) From a longer-term view, the company is expected to grow its EPS at an average annual rate of 14.5% over the next five years, making it one of the most appealing Apple suppliers to own for the near future.

It's been a great time to be a Taiwan Semiconductor shareholder. The company now serves as Apple's exclusive fabrication partner for the powerhouse A10 chip in the iPhone 7, and the chip fabrication house's shares have surged in reaction to the news. 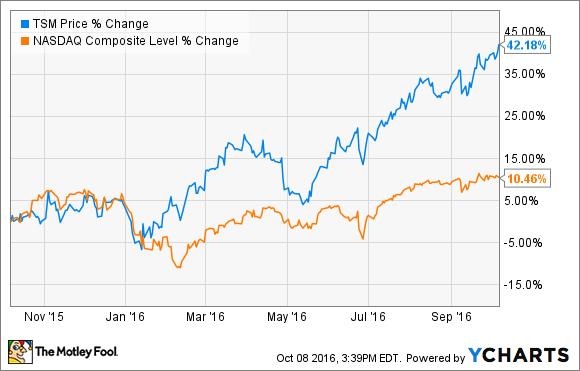 The reaction is understandable. As my Foolish colleague Ashraf Eassa notes, not only does TSM figure to see revenue rise by virtue of winning a greater percentage of Apple's business, but it should also enjoy an additional revenue tailwind by virtue of the A10's larger silicon footprint. What's more, TSM has also reportedly won the fabrication contract for the A11 chip that will power next year's reportedly radically redesigned 10th-anniversary iPhone. These developments should give TSM a continued boost to sales, though an increased reliance on Apple deserves some caution as well.

However, although Apple wants to keep its chip foundry business out the hands of rival Samsung, it's also shown a willingness to reward its South Korean frenemy with its chip-vendor deals if it believes Samsung can produce better results than TSM. Case in point: After TSM produced the majority of A8 chips, Apple reportedly contracted with it for only an estimated 30% of its A9 chips.

Reports say that Apple comprised only 8.2% of TSM's sales as of last year, so that number figures to increase dramatically as a result of winning all of Apple's A10 business. Not that TSM can rest on its laurels, especially with mention of Intel's interest in further scaling out its own third-party chip foundry services. An Apple-Intel alliance has already been mentioned as a distinct possibility in either 2018 or 2019, though they remain just rumors for now.

Apple has a deserved reputation as a tough customer for its suppliers. Just ask the now-defunct GT Advanced. The billions in sales Apple can offer a potential vendor have historically come with their own costs, and anyone looking to invest in the companies within Apple's massive supply chain need to understand the risks. So while investing in Apple suppliers can be a winning strategy, as it has been for Broadcom and Taiwan Semiconductor, it isn't a one-size-fits-all strategy, either.