Ford Motor Company (NYSE:F) CEO Mark Fields is charting a new course for the iconic automaker. With new technologies poised to "disrupt" its traditional business model, Fields is taking steps now to position Ford to thrive as its industry evolves -- and to deliver strong profits to shareholders along the way.

As Fields and Ford's leadership team see it, one of the keys to delivering those strong profits -- and to funding those new opportunities -- is to develop a significant presence in global luxury-vehicle markets, something Ford has long lacked.

That's where the Lincoln brand comes in.

Fields: We want Lincoln to be much more profitable

At Ford's annual Investor Day presentation last month, Fields explained that Ford is making serious efforts to transform three parts of its core business where it hasn't been satisfied with its success.

The first of those is luxury. Simply put, luxury is a compelling opportunity for automakers because luxury vehicles can be sold with higher profit margins (and at higher prices) than mainstream vehicles. Automakers with thriving luxury brands can reap significant profits.

Take the example of Volkswagen (OTC:VWAGY): VW's Audi and Porsche brands accounted for just 19% of the passenger vehicles VW sold in 2015, but together, the two brands generated 67% of VW's total operating profit (excluding the huge costs related to VW's diesel scandal).

Of course, Lincoln isn't going to equal the market share and prestige of Audi any time soon, but as Fields has recognized, that doesn't mean Lincoln can't be doing a lot better than it was just a few years ago.

Doubling down on a plan to boost Ford's old luxury brand

Here's what Fields said about Lincoln at Ford's Investor Day:

Our commitment and my commitment is to make sure we turn Lincoln into a world-class luxury brand with a product lineup and a client experience to match -- and strong returns for the company.

We've introduced four new Lincolns over the past four years. When the new Navigator comes next year, we will have completed what I would call the first generation of our transformational products.

What's clear is that the marketplace is responding. In the last 4 years, our sales are up almost 80%. We've had a very strong reaction in China, where we introduced the brand [in late 2014]. And actually, Lincoln's brand image is equal to Lexus in China.

But it's also not just the products. It's also about the client experience. In China, the team introduced something called the Lincoln Way, which is a very warm and personalized approach to client experiences. It has been really well received, and we're  now implementing it here in North America. And customers are noticing. 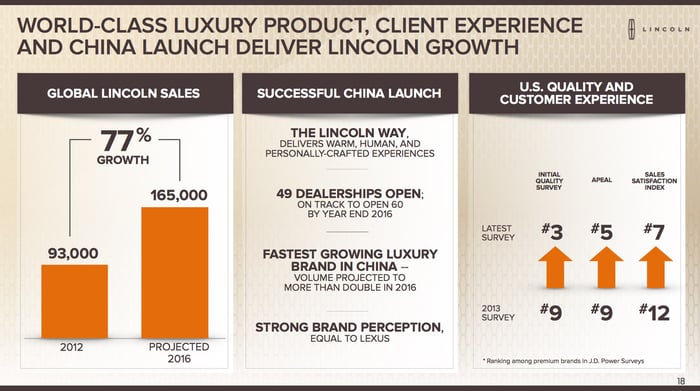 Fields frankly acknowledged that there's much more work ahead. "We're working now on the next generation of products," he said.

At the same time, we're continuing to improve that client experience and working further to strengthen the brand. But we're just as equally committed to making sure that Lincoln is a consistent profitable contributor to the company.

We know we're on a journey with this. Everybody in our team knows there is no blank check here. But the early results are really encouraging for us.

Lincoln is going in a different direction than Cadillac

Ford's ambitions for Lincoln are much more modest than General Motors' (NYSE:GM) plans for old rival Cadillac. GM is spending $12 billion on a slew of dedicated new products and is working to aggressively reposition Cadillac as a top-shelf rival to the German luxury-car giants. The plan is to make Cadillac a profit center to rival GM's longtime cash-cow truck business, and GM acknowledges it could take a decade or more to fully unfold.

Lincoln's latest model, the plush Continental sedan, was designed with the tastes of both American and Chinese buyers in mind. Image source: Ford Motor Company.

Ford, on the other hand, is just hoping to draw more consideration from buyers in the U.S. and China, who might otherwise look at something like a Lexus, and to boost its bottom line in the process. So far, so good: Lincoln's latest products, along with a catchy ad campaign featuring actor Matthew McConaughey, have already begun to move the brand past its longtime "airport car" reputation. It's a promising start, but as Fields said, there's plenty of opportunity for further improvement.