Shares of Seagate Technology (NASDAQ:STX) rose 14.3% in September 2016, according to data from S&P Global Market Intelligence. The surge started with a rosy guidance update from rival hard-drive builder Western Digital (NASDAQ:WDC). The move was later sustained by more good tidings about the health of the global PC market, along with a private equity firm building a very large position in Seagate's stock.

Thanks to a recovering PC market and a rapid shift toward high-margin solid-state drives, Western Digital lifted its earnings guidance for the current quarter by 17%. This unusual move lifted Western Digital shares 14% higher, and Seagate followed along with a 6% gain that day.

A steady drumbeat of positive PC market readings followed, and there was no going back. Seagate's gains just kept growing.

Along the way, private equity firm ValueAct Capital invested more than $400 million in Seagate shares, and now holds a 4% stake in the storage specialist. In exchange for the huge investment, the activist investor firm was given a special seat on Seagate's board of directors. This seat has full access to board meetings and other proceedings, but holds no voting power. In an unusual twist, the relationship was started by Seagate reaching out to ValueAct, and not the other way around. 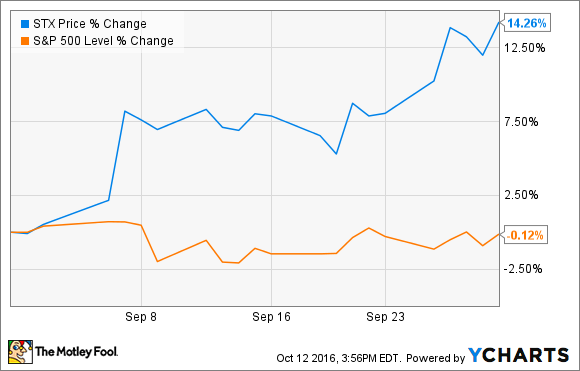 Honestly, the ValueAct exchange looks like the beginnings of an exit strategy. Seagate still lacks a robust response to solid-state drives replacing the company's traditional hard drives, while Western Digital found a solution in picking up SSD specialist SanDisk in a $15.8 billion deal.

With guidance and connections provided by ValueAct, Seagate could end up under the wing of a much larger technology business. I'm not here to start any rumors, but I can think of several names that would make sense in a deal like that.

That's a little bit different from the "strong vote of confidence" that some investors might see in the ValueAct transaction. Maybe my thinking is colored by Western Digital's better positioning in the solid-state storage market. I do hold shares in Western Digital, but not Seagate, for exactly that reason.

So far, ValueAct's presence has not caused any obvious changes to Seagate's operations. That might change next Wednesday when the company reports first-quarter results. Until then, I will remain cautiously speculative on Seagate's sidelines.