There is little denying that microprocessor giant Intel (NASDAQ:INTC) has been and will continue to be highly dependent on the declining personal computer market. There's little that the company can do at this point to stimulate customer demand for personal computers, but what it can do is try to leverage its core technologies and competencies to open up new revenue streams.

The most successful of these efforts by a large margin has been the company's work to develop processors and related hardware and software components for data center applications.

Intel's data center group, or DCG, is an important part of the company's business today and is only going to become more important going forward. In light of this, here are three key facts that current and potential Intel investors should know about this essential Intel business unit.

It's a large part of revenue, and growing

In 2015, Intel's data center group pulled in about $16 billion in revenue, good for around 29% of the company's total revenue in that year. For the current year, Intel's most recent guidance calls for DCG to deliver revenue growth in the low double digits.

Intel seems confident that it can keep growing DCG at over 10% for a while, whereas its goal with its client computing group, or CCG, seems to be to try to simply keep its revenue from declining (CCG is mainly tied to a declining personal computer market). Since DCG revenue is likely to dramatically outgrow CCG revenue for quite some time, it's only reasonable to expect this segment to continue to grow as a percentage of Intel's total revenue.

In 2015, Intel's DCG reported operating profit of $7.8 billion on revenue of $16 billion, meaning that operating margin came in at 49%. These high margins are the result of a couple of factors.

First, the products that DCG develops and sells leverage a lot of the technologies that Intel already builds to support its personal computer business -- a point that former Intel CFO Stacy Smith made back at the company's 2014 investor meeting. 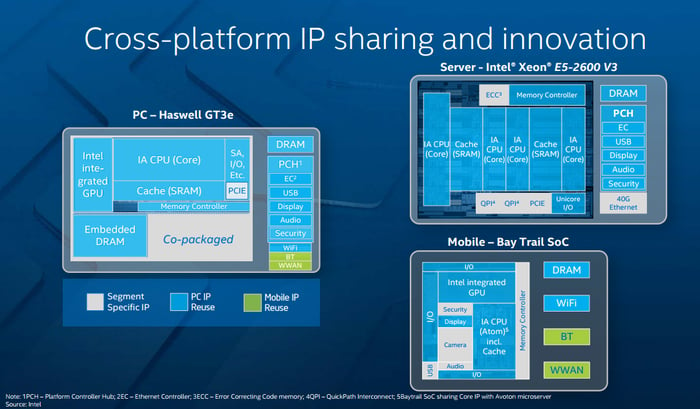 Intel's PC and server chips have a lot in common. Image source: Intel.

In a nutshell, this means that because of the work that Intel does to build its high-volume personal computer products, its data center group needs to invest in building only the technologies and products specific to its business, rather than reinvent the wheel.

That winds up saving Intel money and ultimately allows this segment to maximize the return on each incremental research and development dollar.

Beyond that, though, Intel has an extremely strong competitive positioning in the server processor market. This has translated into both extremely high market-segment share (technology research company IDC estimates it at around 99.2% unit share) and robust pricing power. It wouldn't be surprising if Intel's DCG, today, delivered meaningfully better gross profit margins than CCG.

It's worth noting that many companies have announced their intentions to go aggressively after Intel's share in this market; ARM, for example, believes that its partners will collectively capture 25% of the server market from Intel. Should these competitors field credible, competitive offerings (easier said than done), Intel risks some combination of margin compression and market-share loss.

It's about more than just server processors

Although the bulk of the company's DCG revenue today comes from the sale of server processors, Intel aims to significantly grow its sales of complementary components to its bread-and-butter server processor business.

All told, Intel is calling for the CPU-related revenue in DCG to increase at a 12% compounded annual growth rate (CAGR), through 2019, while "non-CPU" will drive enough growth to allow the business as a whole to grow at a 15% CAGR in that time.