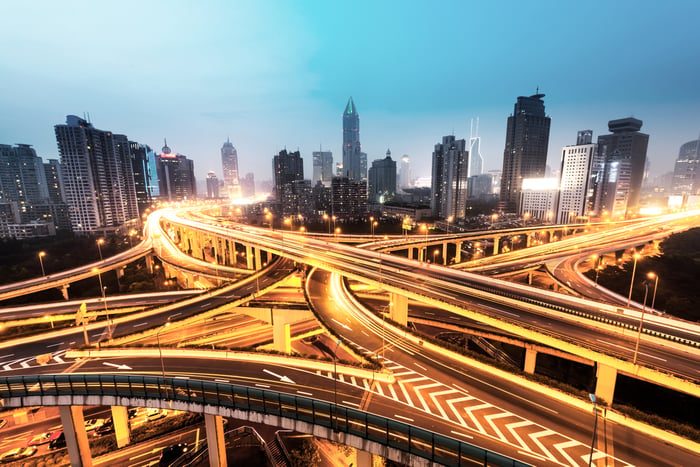 Car ownership in China has been booming for the past decade. According to Statista, the Middle Kingdom has seen growth in the number cars owned of 14% per year from 2007 to 2015.

Sitting right in the middle of all of this is Bitauto (NYSE:BITA), a China-based company that's built out a platform for car salesmen to show their product online and created a financing infrastructure to help make the car-buying process more seamless.

You'd think -- given the upward trend of car ownership in China -- that the company's stock would be poised to pop. But that's not the case at all. Currently, almost 10% of Bitauto's float is sold short, and the stock is down 70% from its 2014 highs. With so many investors continuing to bet against the company -- even in the face of a steep dive already -- it's worth asking if the shorts are right.

There are lots of arguments that those selling shares short can make. First and foremost is the fundamental nature of the company: It is based in China, and small-cap Chinese stocks have historically been dubious investments. On top of that, McKinsey put out a report earlier this year that said the growth rate of car ownership in China would be cut all the way down to 5% per year through 2020, a far cry from where it's been over the past seven years.

Furthermore, the stock isn't cheap. On a non-GAAP (adjusted) basis, shares trade hands for 38 times trailing earnings. If you include stock-based compensation, the company is actually losing money. And if that weren't enough, Bitauto is facing competition from a much-bigger rival: Autohome (NYSE:ATHM), which is valued at a 60% premium to Bitauto and trades for just 15 times trailing earnings.

When you add together an industry with slower growth, an expensive stock, and formidable competition, it's not hard to see why many don't view the future of the company optimistically.

However, as a current shareholder of Bitauto, I think there's a ton of potential. No factor is more important than the company's efforts at building out sustainable competitive advantages. Bitauto's Easy Pass (EP) platform for dealers functions both as a customer service management tool and a format to help finance and process payments to make the car-buying experience easier.

When a dealer puts all of its information on the platform, the switching costs become very high -- as the headache of switching providers, training employees on a new system, and potentially losing data in the process is too much to bear.

While there are officially three segments to Bitauto's business, it's clear where the growth is coming from: transactions and digital marketing. 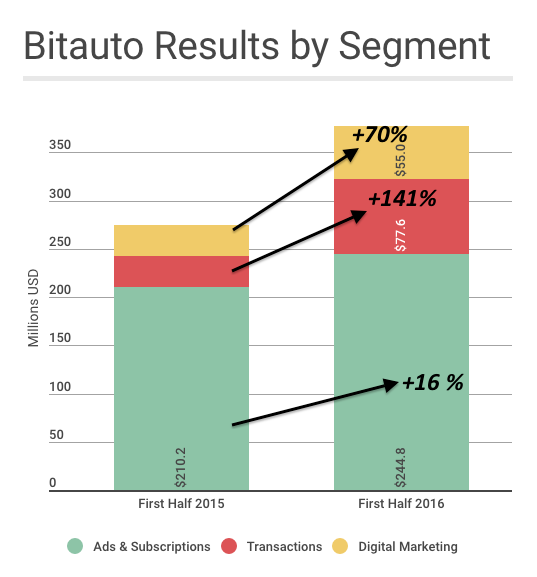 I believe that if Bitauto can continue getting customers on its EP platform -- which helps bring in revenue for both advertising and transactions -- then it will have both high switching costs and a treasure trove of data that will help it continually serve its customers better than anyone else can. Right now, Bitauto is increasing spending to expand this moat. While some on Wall Street don't like the move, I think it's a great long-term strategy.

Additionally, I am comforted by the fact that the company is run by its founder, William Bin Li, who owns 14.7% of shares outstanding. But perhaps the most important source of confidence for bulls like myself came from a move this summer by Chinese internet giants JD.com, Baidu (NASDAQ:BIDU), and Tencent. They combined to buy an ownership stake equal to 33.8% of shares outstanding.

These players have a better view into Bitauto's prospects than I do from here in the States. While there's no doubt that serious risks are present, there's also enormous potential for Bitauto to be a long-term force in China. Because of the company's widening moat, a young founder-CEO with skin in the game, and backing from the biggest internet names in China, I'm willing to say that the bears are wrong, and take a small position to back up that assertion.