Graphics chip company NVIDIA (NASDAQ:NVDA) has had a tremendous run over the past year. Revenue and earnings have soared, driven by the company's gaming GPU dominance and its push into the enterprise and automotive markets. Analysts expect the company to produce $6.11 billion of revenue and $1.85 in per-share adjusted earnings this year, up 22% and 71%, respectively.

This rapid growth has led investors to pile into the stock, sending shares of NVIDIA surging. The stock is up 155% over the past year alone, and up 350% over the past five years. With a stock price of around $66, NVIDIA trades at an optimistic 36 times analyst estimates for full-year adjusted earnings. 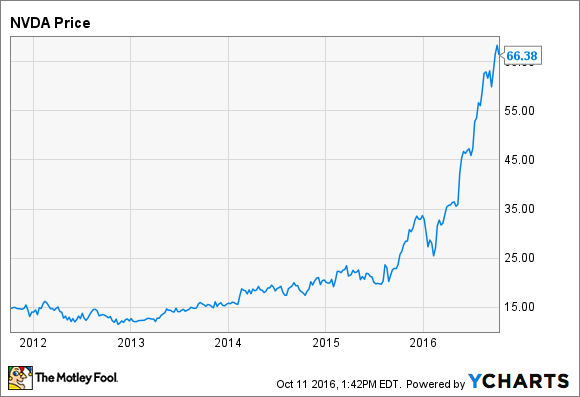 That valuation would be reasonable if NVIDIA could maintain its current level of growth, but analysts are expecting a major slowdown in fiscal 2018, which begins in late January of 2017. Here's what the average analyst estimates look like for fiscal 2017 and 2018:

Analysts still expect high single-digit revenue growth from NVIDIA, but earnings growth will essentially grind to a halt if these estimates are correct. Why are analysts so pessimistic? I think there's one main reason.

In NVIDIA's latest annual report, the company included the following as a risk factor:

In January 2011, we entered into a patent cross licensing agreement under which Intel agreed to pay us an aggregate of $1.50 billion over six years. The final $200 million payment under this agreement was received in January 2016. We will be recognizing revenue under this agreement through the first quarter of fiscal year 2018. If we do not enter into new licensing agreements or if the Intel agreement is not offset by other growth in income, our financial results may be adversely affected.

Since 2011, NVIDIA has been receiving payments from Intel under a cross-licensing agreement. The last payment was received earlier this year, and the first quarter of fiscal 2018 will be the final quarter in which proceeds from the agreement are recognized as revenue.

Now, $1.5 billion spread across six years may not seem like a huge deal given NVIDIA's annual revenue. But these payments are extremely high margin, mostly flowing through to the bottom line. The potential loss of this revenue could have a substantial negative impact on NVIDIA's profitability.

In fiscal 2016, which ended in January, NVIDIA reported $264 million of revenue from the Intel agreement. Adjusted operating income for the year, excluding restructuring costs, was $878 million. A full 30% of NVIDIA's adjusted operating profit came from the licensing agreement.

This percentage will be lower in fiscal 2017, given the company's earnings growth, but it still represents a significant chunk of NVIDIA's operating profit. That $264 million represents about $0.35 in EPS, using NVIDIA's tax rate from last year and its latest diluted share count.

At this point, it's unclear whether a new licensing agreement will be struck, or if it would involve the same level of payments from Intel to NVIDIA. The worst-case scenario is that this revenue disappears after the first quarter of next year, creating an earnings hole that NVIDIA will need to fill by growing profits in its other businesses. Based on analyst estimates, the consensus appears to be that this revenue is going away.

In the long run, the end of the licensing agreement is just a bump in the road. But NVIDIA being able to continue rapidly growing earnings going forward will be tough. First, the company's market share gains in the PC GPU market are beginning to be reversed as AMD goes after the mainstream portion of the market.

Second, the benefits of NVIDIA's ongoing shift toward the high end of the market will eventually be exhausted. NVIDIA has done a great job pulling customers up to higher price points, particularly with the GTX 970 in 2014. But there are only so many people willing to shell out hundreds of dollars for a high-end graphics card. NVIDIA will eventually reach the limits of its high-end strategy.

NVIDIA may be able to pull a rabbit out of its hat and renew the agreement, but at this point, the safe play is to assume that it won't. In that case, earnings growth will likely grind to a halt next year.