Coeur Mining (NYSE:CDE) recently released its third-quarter production results, which showed that the company produced 8.6 million silver equivalent ounces. That result is down sequentially and year over year. Unfortunately, the decline in production is not coming at the best time given that silver and gold prices were at their peak during the third quarter: 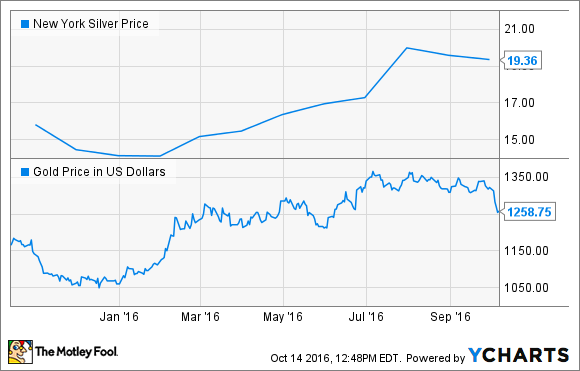 While Coeur Mining missed the opportunity to deliver peak production at peak prices, it will not necessarily tarnish the company's upcoming third-quarter report.

Overall, production was off by 1 million silver equivalent ounces from the prior quarter and 400,000 ounces year over year. However, Coeur Mining's production decline cannot be pinned on any one problem because output at four of its five mines decreased over the prior quarter.

For example, production at its Palmarejo mine fell from 2.4 million silver equivalent ounces to 1.9 million silver ounces equivalent because the company installed a new Merrill Crowe processing circuit during the quarter and it is transitioning to lower-tonnage, higher-grade underground mining operations. Meanwhile, production at its Rochester mine slid 7% over last quarter due to a longer-than-expected recovery time from its Stage III leach pad. Finally, gold production at its Kensington mine slumped 18% due to mill downtime while silver production at its San Bartolome mine slid 6% due to the impact civil unrest in Bolivia had on shipments to processing facilities. Partially offsetting these declines was gold equivalent production at the Wharf mine, which was up 6% due to an increase in tons placed and higher plant recovery rates.

The overall decline in the company's production means it will not make as much money as it could have during the third quarter. That is because production growth has proven to be a major driver of profit and cash flow growth in the past. For example, its second-quarter results were exceptionally strong thanks in part to the fact that its production was up 19% to 9.6 million silver equivalent ounces. That increased output, when combined with cost reductions and higher realized silver and gold prices, enabled the company to nearly double its adjusted EBITDA and generate strong cash flow.

That said, the company does have two recent catalysts that should help mute some of the impact of lower production during the third quarter. First, right after the second quarter ended the company finally satisfied the minimum ounce obligation on the Franco-Nevada (TSX:FNV) royalty at its Palmerejo mine. That triggers a shift in the terms of the Franco-Nevada royalty, resulting in a significant increase in Coeur's free cash flow from the mine. In addition to that, the company repaid the remaining principal on its term loan. That not only reduced its total debt by 20% but will cut its annual interest expenses by $9 million, or roughly $2.25 million per quarter. Given that the company produced $12.2 million in free cash flow last quarter, this is a significant saving.

For perspective on the potential impact of these non-production related catalysts, consider the impact that similar catalysts had on leading gold miner Barrick Gold (NYSE:GOLD). Last quarter, for example, Barrick Gold produced $527 million in operating cash flow, which was up $2 million from the year-ago quarter despite the fact that its gold production declined from 1.45 million ounces to 1.34 million ounces. One of the drivers was a $968 million decrease in debt, which cut its interest expenses by $73 million. In addition to that, Barrick Gold reduced its costs by 19% enabling it to capture much higher margins on the gold it did produce during the quarter.

Because precious metal prices were at their peak during the third quarter, it would have been the quarter that Coeur Mining wanted to deliver robust production. Unfortunately, several issues hampered its output, causing it to decline. That said, the company's upcoming third-quarter earnings report should still be pretty solid given that it has several other catalysts that should help mute the impact of lower production.