Netflix (NASDAQ:NFLX) is scheduled to report third-quarter results Monday evening. Three months ago, Netflix shares plunged 15% after it reported disappointing subscriber growth in the second quarter and a soft outlook for the third quarter. The stock has just about recovered from that blow.

So what should Netflix investors expect from this business update? Let's have a look.

Netflix's management provides fairly detailed guidance targets from one quarter to the next. This time, the company expects to report bottom-line earnings of approximately $0.05 per share, culled from total sales of roughly $2.3 billion.

Investors do care about these standard business metrics, but other figures are likely to take top billing in this report. The company aims to have added 300,000 net new domestic streaming subscribers, coupled with 2 million new international accounts, both up from second-quarter numbers. The Rio Olympics were expected to have distracted consumers around the globe from digital video options, and many markets (including the U.S.) are finally feeling the effects of price increases that were announced as much as two years ago.

In fact, those price increases will have a special place at center stage on Monday. How quickly is Netflix implementing this long-awaited policy change? Exactly how much will average revenue per user rise? And above all else, how many Netflix subscribers refused to pay more for the service, signing off entirely instead?

The plain numbers will hardly tell the whole story, of course. Netflix investors are looking for a lot of intangible updates as well.

CEO Reed Hastings recently said that the Chinese market is nowhere near opening up to Netflix services. The Middle Kingdom is cracking down on foreign businesses, especially when it comes to media operations. Netflix has found it difficult to land the necessary licenses and permissions to open shop there, whether on its own or in partnership with local media specialists. Expect Hastings to address this issue on Monday, but it's probably best to keep your expectations low.

Another thing to watch: Comcast (NASDAQ: CMCSA) is about to start streaming Netflix services through its high-end X1 cable boxes. Given the widespread availability of Netflix-enabled Blu-ray players, gaming consoles, and smart TV sets, it's unclear exactly how much of an advantage this deal really is. Any insight or guidance Netflix can offer on that detail would be welcome. The company has some experience with cable-box integration deals, and should be able to set realistic targets.

Netflix should also have some insight on the popularity of its more expensive plans. 4K television sets used to be rare and expensive, but are quickly becoming the new baseline standard. Netflix charges an additional $2 per month for high-end plans that serve up 4K video streams. How many subscribers made that additional jump when nudged to make a decision on what the Netflix service is worth to them?

Analyst John Blackledge from Cowen & Co. sees 4K adoption driving subscription prices higher. According to the latter's surveys of Netflix customers, owners of 4K sets are twice as likely to go with Netflix's priciest service level at $11.99 per month -- and very unlikely to use the expiring $7.99 plan at all. The next version of this Cowen chart should show a sharp shift toward the higher-end subscription plans. How much? Monday's report should at least give us a hint. 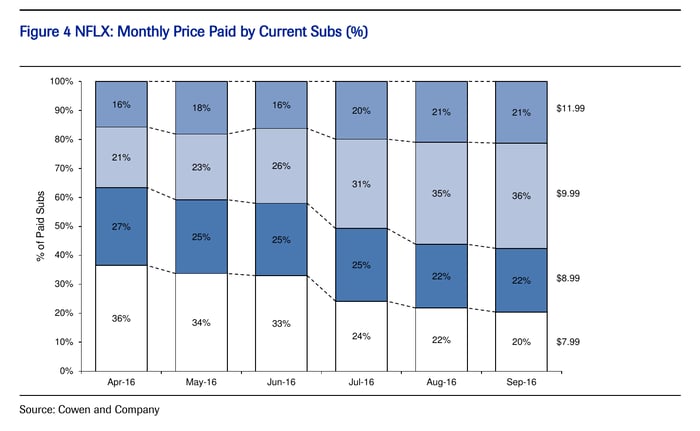 Netflix has long signaled an end to its current streak of minimal profits. The bottom line is expected to turn way up in 2017 as expenses related to the global service rollout fade out. As that shift draws near, perhaps Hastings and his team might provide some inkling as to how far the operating costs will drop, how high next year's earnings might jump, and whether any of this will translate into stronger cash flows.