As losses have continued to pile up at Sears Holdings (NASDAQ:SHLDQ) in recent years, the storied retailer has been selling off its most valuable assets in an effort to stay afloat. Earlier this year, Sears announced that it would consider selling its popular Kenmore, Craftsman, and DieHard brands to raise cash. It also may sell the Sears Home Services installation and repair business.

Sears may be close to selling the popular Craftsman tool brand. Image source: The Motley Fool.

It looks like the Craftsman tool brand may be the first to go. A handful of suitors appear to be interested in buying the Craftsman business for about $2 billion. Such a cash infusion would allow Sears to survive for the next year or two -- but in the long run, it won't help the company avoid bankruptcy and liquidation.

Sears is raising cash as fast as it can

In the past four years, Sears Holdings has raised an impressive $5.8 billion from monetizing a variety of assets. Real estate sales have been the most important source of cash, but the company also squeezed out more than $1 billion combined from Sears Hometown and Outlet Stores, Lands' End, and Sears Canada before spinning them off.

However, while Sears Chairman and CEO Eddie Lampert has repeatedly pulled money out of a hat with these tricks, it hasn't kept Sears stock afloat. Instead, the stock has fallen steadily as free cash flow has moved deeper and deeper into negative territory. 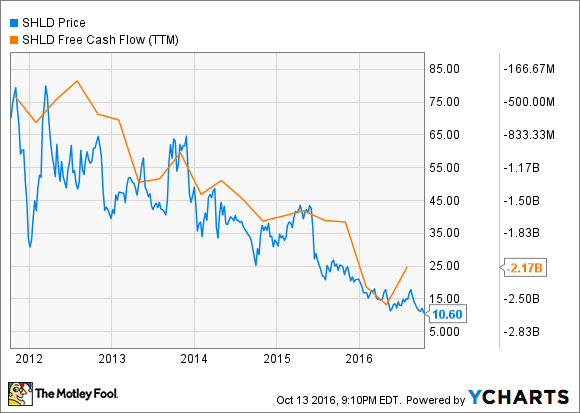 This reflects the fact that Sears' core retail business is burning cash at an alarming rate. Indeed, Fitch Ratings estimated that Sears will burn $1.6 billion to $1.8 billion in cash this year, not including any asset sales. Thus, selling Craftsman would provide enough cash to keep Sears in business for an extra year, but not much more than that.

For Sears Holdings stock to be worth anything, the company needs to stop burning cash so that it can return the cash generated by asset sales to shareholders rather than using it to fund losses. Unfortunately, Sears has no path to breakeven.

So far, the company's main strategy has been to close lots of stores. Closing stores en masse ought to drive more traffic to the remaining stores, but Sears has still reported a long string of comparable-store sales declines. That means it is quickly losing whatever relevance it still had a few years ago.

For example, appliances were one of Sears' last bastions of dominance. As recently as 2013, Sears held 28% of the U.S. appliance market, according to a Credit Suisse analysis -- nearly as much as Lowe's (NYSE:LOW) and Home Depot (NYSE:HD) combined.

By 2015, Sears had already fallen behind both home improvement giants in the appliance market. It lost $1 billion in appliance revenue in 2015 alone, while Lowe's and Home Depot both registered double-digit gains.

Sears has been losing appliance market share to the likes of Home Depot. Image source: The Motley Fool.

Sears' appliance sales have continued to sink at a rapid rate in 2016, further undermining the company's efforts to reduce its losses.

Selling off top brands will make Sears even less relevant

Sears' private-label appliance and hardware brands -- Kenmore, Craftsman, and DieHard -- are some of the only things still drawing customers to Sears (and to a lesser extent, Kmart) stores. Right now, these popular brands are available only at Sears, Kmart, and a handful of other retailers (mainly former Sears subsidiaries).

However, any acquirer is going to want to distribute these brands more widely. That's the only way to make them growth businesses, in light of Sears' downward spiral. This means Craftsman tools could soon hit the shelves at Lowe's and Home Depot. Kenmore appliances and DieHard batteries might not be far behind.

If these brands show up at retailers like Lowe's and Home Depot that already have strong customer traffic, there won't be much reason for shoppers to make an extra stop at Sears. Selling off Craftsman and other key brands might provide enough cash to let Sears soldier on for a few more years -- while making it all the more certain that Sears will eventually collapse.