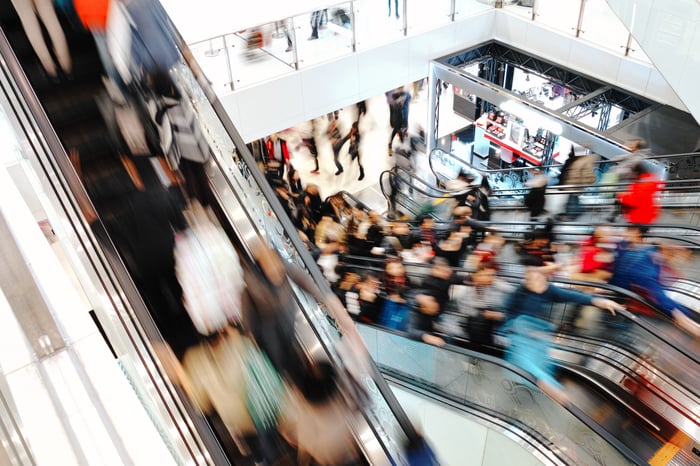 Shopping malls haven't been a hive of activity these days as retailers struggle to make sales, but the closure of hundreds of stores across the country is actually good for the industry. Image source: Getty Images.

Retailers across the country are closing hundreds of stores as they confront the marketplace changes brought on by Amazon.com and the growth of e-commerce, but their shrinking footprint doesn't have to bring about dire consequences -- and, in fact, could be very good for the industry.

The announcement that Macy's (NYSE:M) was closing 100 stores shook up the markets as it signaled the realization that retail needed to dramatically reduce its sprawl. The number was huge, even though it will still have nearly 800 Macy's and Bloomingdale's stores when it's finished shuttering stores early next year.

Moreover, when you consider those closings are second only to Sears Holdings (NASDAQ:SHLDQ), which has closed hundreds of Kmart stores and is planning on closing hundreds more, you realize just how troubled these retailers are.

It's a process being repeated elsewhere as well, particularly as many retailers declare bankruptcy. Sports Authority, Eastern Mountain, Aeropostale, Pacific Sunwear, American Apparel, and Quicksilver are just some of the retailers filing for bankruptcy court protection within the past year, and with them have come dramatic numbers of store closings.

Yet this is actually a positive development. Retail is simply "over-stored," with too many locations open to meet demand, so reducing the inventory of locations ought to help the remaining retailers do better, in three ways:

Macy's says that by closing the 100 stores, it's going to lose about $1 billion in sales, even after accounting for the customers that will be pushed to its remaining stores or who will go to its website to shop. To offset those losses, it is initiating cost-cutting measures, including selling off real estate, firing employees, strategic partnerships, and more.  Similarly, Office Depot, which says it will close 300 stores over the next three years, is looking to cut annual costs by $250 million by the end of 2018.

Although the retailers will be taking charges related to their closures -- Macy's, for example, is taking non-cash asset impairment and other charges of $249 million related to the 100 stores -- longer-term, they will be better off financially. The markets certainly agreed, sending Macy's stock 17% higher on the news.

While retailers do expect some of their customers to move to their other stores or to their online stores, they understand that the competition is going to pick up a number of those shoppers. After Macy's announcement, both Kohl's and J.C. Penney (OTC:JCPN.Q) said they saw no need to follow suit with their own mass closings, and the latter said it would likely benefit as Macy's customers came to shop at its stores.

J.C. Penney shares mall space with Macy's, Sears, and many of the other retailers that have announced closures, so it's not unreasonable to expect they will see an uptick in customers. Both Kohl's and Penney already went through their own store closures in prior years, and J.C. Penney said if it closed more, it would actually hurt business. It also says when it closes stores, online sales get hurt, too.

There is one group that's likely to be concerned about the wave of store closings, and that's the mall operators. When Macy's made its store-closing announcement, shares of the two largest mall owners, General Growth Properties and Simon Property Group, slid on the news. That should allow retailers to negotiate from a position of strength when it comes time for lease renewals.

A new lease on life

That could help troubled retailers like Gap (NYSE:GPS), which continues to struggle with falling sales and has identified 100 stores of its own it plans on closing over the next few years. In its annual report filed earlier this year, it said it has more than $1.1 billion in non-cancelable lease obligations due this year, another $1.1 billion due next year, and some $6.8 billion total. The analysts at Morningstar estimate there are at about 130 commercial real estate mortgages backed in part by Gap stores with leases expiring within the next two years, 32 of which could see occupancy rates fall below 80% if the Gap store closes. That gives the property managers a big incentive to be forgiving when it comes time to talk rent.

Every industry goes through a shakeout period when dramatic events occur, and this seems to be the time for retailers. Although it's not a painless procedure, it's a necessary one, and it could make all those remaining players stronger.