Investing in Alcoa based on aluminum prices could pay off -- or not. Image source: Getty Images.

One of the challenges with investing in materials companies is how commodity prices, which are volatile, play a huge role in profits and losses. And if you've paid any attention to the price of oil, iron, or aluminum over the past several years, you've seen how low commodity prices have played havoc with many of the companies that deal in these materials. Aluminum giant Alcoa Inc (NYSE:AA) has certainly felt the impact of low bauxite, alumina, and aluminum prices in recent years: 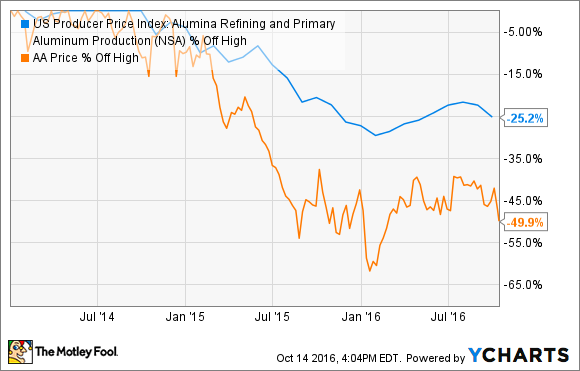 But historically speaking, the best time to buy Alcoa has often been when aluminum and alumina -- a precursor material that is refined from bauxite -- prices were low. And they're pretty low right now.

As you can see in the chart above, the producer price index (that is, how much producers sell the product for) for refined alumina and primary aluminum is down 25% from its peak since 2014. Here's another table for historical context: 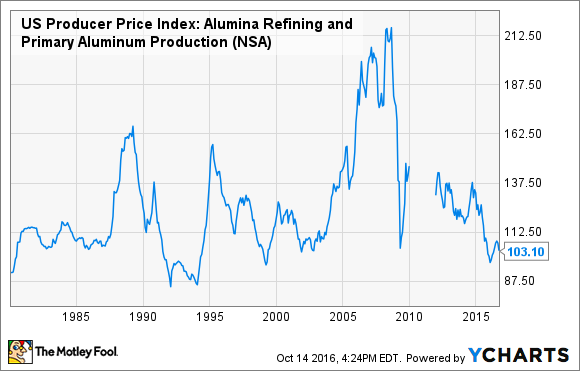 This table starts in 1980, when the producer price index for primary aluminum and alumina was 100. In other words, aluminum producers are only getting slightly more today than they were for their product 36 years ago, and far less than they were for much of the past decade plus. Current prices are even lower than those of the Great Recession.

Just as with most commodity markets, supply and demand is behind this, with global production way up over the past half-decade, far exceeding demand growth, resulting in a large surplus of global inventory, and driving prices down substantially.

But that's starting to change

According to Alcoa and other industry sources, 2016 has been the first year in many where demand growth has exceeded supply, with roughly 5% growth in demand versus 3% supply growth. Alcoa management projects that this will lead to a deficit of 1.6 million metric tons of alumina and 615,000 metric tons of aluminum for the full year, helping work through some of the glut that has been driving prices down for the past several years. If the trend of slower production growth holds true for the rest of 2016 and carries into 2017, that would certainly bode well for alumina and aluminum prices.

As a lower-cost producer, Alcoa should be in a solid position to ride out the current environment, while positioning itself for outsize profits when commodity prices eventually rebound.

Historically it works (except when it doesn't)

The one problem with acting on this historical trend is that it's not guaranteed to work quickly, or even work at all. For instance, if you had bought shares of Alcoa in 2002 -- when the producer price index was actually slightly lower than it is today -- you wouldn't have been able to sell for a profit for at least two years. Worse yet, it would have been a terrible long-term investment: 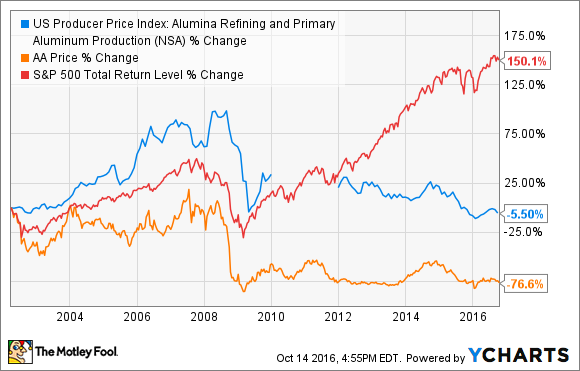 However, following the same thesis in 2003 would have resulted in a substantial gain in less than a year: 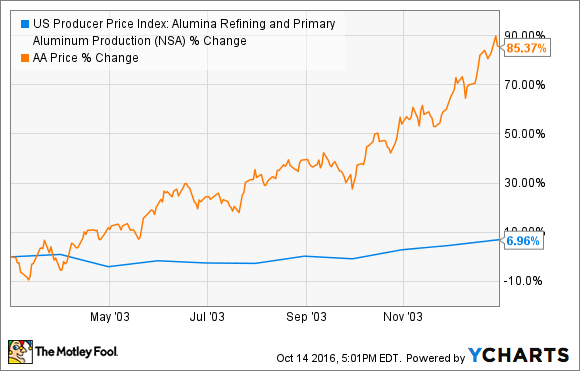 This is a far-from-perfect opportunity, and certainly not a "buy and hold" investment due to the impact of volatile commodity prices when you're a primary producer like Alcoa.

Understand the upside, downside, and your ability to act on it

I have to confess that this is an appealing opportunity to profit from higher aluminum prices. But as anyone who's followed the oil market will tell you, prices can stay much lower than you expect, and for much longer than you think. After all, there are many things that go into a complex global market that we just can't know, that can have major repercussions on that market.

At the same time, Alcoa's position as a low-cost producer reduces some of the downside, while also boosting its profit potential from higher prices.

Bottom line: If aluminum prices do rise, which they surely will if the current supply/demand imbalance continues, this could make for a strong cyclical opportunity to buy Alcoa on the weak side of the aluminum market. But the hard part will be holding through the cycle of prices rising, and knowing when to sell.