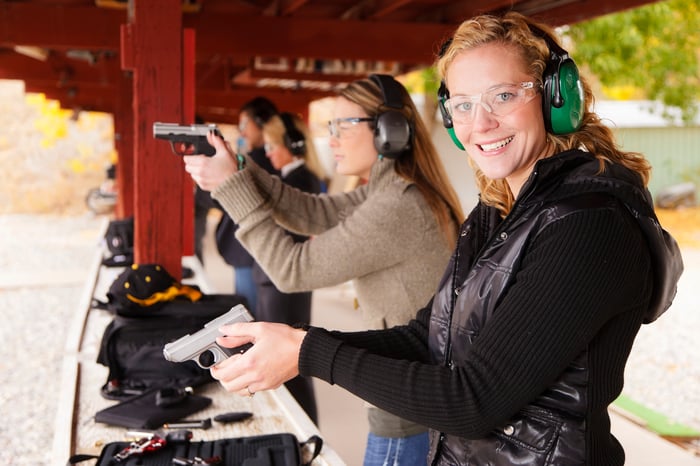 This is no time to be standing athwart history yelling "Stop!", although that's exactly what Wall Street is doing when it insists gun buying demand is slowing.

There have been only two years out of the past 17 for which the FBI has been keeping track that criminal background checks for people interested in buying guns have not grown from one year to the next. The last time it happened was in 2002, and the current year is on track to break all records.

Through September, the FBI has already logged almost 20 million criminal investigations of gun buyers, up 27% from the same period in 2015, and with three months to go, it's possible 2016 could exceed last year by 20% or more.

However, just last week, one analyst downgraded the stock of Smith & Wesson Holding (NASDAQ:SWBI) because he said the rate of growth in the number of background checks conducted had "meaningfully decelerated," and there were difficult comparable figures coming in December.

While it's true FBI data did seem to show a decline in August and only mildly rebounded in September, it wasn't because of a lack of demand, but rather an FBI computer upgrade that resulted in states reporting anomalies with their numbers. For example, Kentucky didn't report its full complement of background checks in August, leading to a massive underreporting of data, and it didn't go back online until the second week of September, so at least a full week's worth of background checks were missing from that state alone. 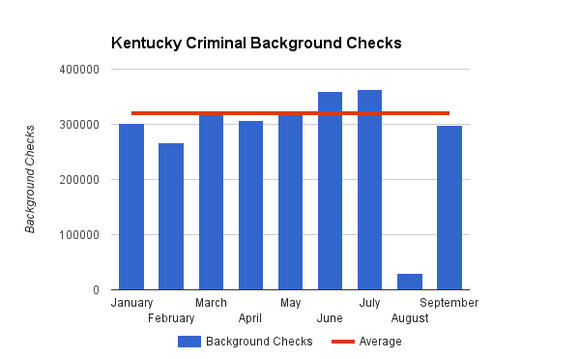 The National Shooting Sports Foundation, which compiles adjusted data based on the FBI records to track trends in gun sales, reported irregularities in other states that caused them to lose confidence in the law enforcement agency's numbers.

Yet even with the anomalies, the past two months were still the largest number of criminal investigations conducted during their respective months going all the way back to 1998, when the FBI first began keeping such records, and it's been that way every month for the past 17 months. October is likely going to have a blowout number as well.

Here's where analysts would do well to pay attention to history. The month of October typically exhibits a huge surge in the number of investigations done compared to the month before, or even the year-ago period. Just like the full-year numbers, October rarely sees a decline year over year, and without fail it has always seen higher reported numbers than September. That means when the FBI reports the next batch of data, we're likely to see a huge increase in the number of background checks performed. Adjusting for the past two months' anomalies, there could be as many as 2.4 million checks performed this month if the averages hold up, so that on a reported basis, it would look like a dramatic 20% increase from both September and last year. Only twice before has October jumped so high, and once it was right before President Obama was elected to his first term in office.

That, of course, explains October's bullish nature. Every year, there are congressional seats up for grabs with talk of greater gun control measures making the rounds, and every four years, a presidential election is held that really amps up the rhetoric. This year's presidential election, with the winner appointing a Supreme Court justice to fill the vacancy created by the death of staunch Second Amendment advocate Antonin Scalia, carries even greater import.

Sturm, Ruger (NYSE:RGR) certainly thinks so. CEO Mike Fifer says Ruger is pledging to donate to the National Rifle Association's Institute for Legislative Action $2 from every gun sale it makes between now and election day on Nov. 8, as well as making a matching contribution to the gun rights group of up to a total of $5 million.

It's just not the month of October that sees a surge: November and December also invariably notch higher background check numbers, too. There's just no other way to see the next three months than as continuing the huge influx of individuals wanting to buy guns. In fact, there are few months that post as high of a rate of background checks performed as do October, November, and December.

That's just history, and Wall Street analysts who take a bird's-eye view of the situation are missing it. That doesn't mean you have to ignore what's gone before, though. Instead, it might be a prime opportunity to look at those gun manufacturers that the market is giving the biggest discount to and decide which one (or perhaps all of them) might be best for your portfolio.

You can fight history, or roll with it. The choice is yours.