Rather than rushing in and buying shares in these companies, investors may be better off sitting on the sidelines. 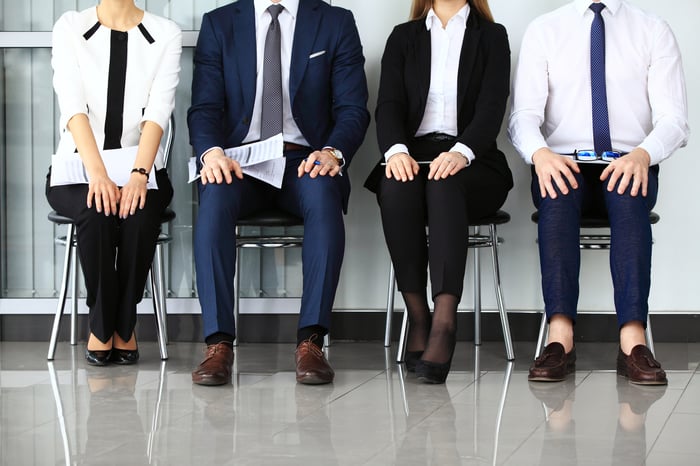 Stocks that appear worth buying sometimes aren't. Any number of things can derail an otherwise promising stock, and that means investors need to do their fair share of digging before buying. To help identify stocks that investors ought to approach patiently, we reached out to some of our top contributors. Read on to see which three companies they think it's best to wait to buy.

Todd Campbell: A sky-high 5% plus dividend yield isn't enough of an incentive to get me to jump in and buy GlaxoSmithKline PLC's (GSK -0.85%) shares. The company faces an uphill battle to protect billions of dollars in sales once its Advair Diskus loses its patent protection.

Advair Diskus is used to treat asthma and COPD, and its dominance in its indications has resulted in it becoming a major contributor to the company's top line. Last quarter, Advair Diskus accounted for roughly 15% of GlaxoSmithKline's companywide revenue.

That's bad news for investors because patents on the Diskus inhaler, which have been protecting Advair's market share, are expiring this year, and generic drugmakers are eagerly anticipating a chance to knock Advair Diskus off its perch.

If the FDA clears a low-cost alternative to Advair Diskus, it could lead to a steep drop in GlaxoSmithKline's U.S. pharmaceutical sales. Last quarter, sales of Advair Diskus in the United States accounted for $690 million of Advair Diskus' $1.27 billion in global revenue.

GlaxoSmithKline may be able to withstand the competitive risks associated with Advair Diskus' patent expiration, but there are two other things keeping me on the sidelines, too. First, the company just promoted a new person to become its CEO when Andrew Witty steps down next March. Second, I'm not entirely convinced that fallout from the U.K.'s decision to exit the EU won't create some hiccups that will need to be overcome down the road.

This engine maker is losing power

Neha Chamaria: I'm getting increasingly apprehensive about Cummins Inc. (CMI -0.16%) stock, which has already gained 43% year to date, especially given the massive challenges the company faces. With the stock within striking distance of its 52-week high, I believe investors might be better off staying on the sidelines for now.

Cummins downgraded its 2016 revenue outlook to down 8%-10% from down 5%-9% last quarter, as demand from both on-highway and off-highway markets deteriorated. As a leading engine maker, Cummins' fortunes depend a great deal on the health of the North American trucking industry.

Unfortunately, the trucking markets are going through a rough patch right now: Class 8 (key heavy-duty truck segment) truck orders in North America declined 20% sequentially and almost 58% year over year in July. Cummins' key truck customer PACCAR also lowered the upper end of its 2016 guidance for industry Class 8 truck sales in the second quarter. With spending in the mining and oil and gas industries showing no signs of a revival, Cummins' off-highway business is having an equally hard time.

If that isn't worrisome enough, increased competition appears to be eating into Cummins' market share. While PACCAR is already making headway with its in-house engines, Volkswagen's impending acquisition of a 17% stake in Navistar International could also hit Cummins as Volkswagen engines make their way into Navistar trucks.

There's no denying that Cummins is doing a great job controlling costs, but the threats to its growth appear to be greater than its opportunities right now. With analysts expecting Cummins' earnings to grow low mid-single-digit percentages in the next five years, the stock might come under pressure going forward.

A good company just got better

Daniel Miller: I'm on the fence with my reasoning behind picking Ritchie Bros. Auctioneers (RBA 0.61%). That's because, here at The Motley Fool, we encourage you to buy wonderful businesses and hold on for long periods of time. So, if you were to buy Ritchie Bros. right now, I wouldn't blame you. But because of recent events, I do suggest you wait for a dip or market pullback. 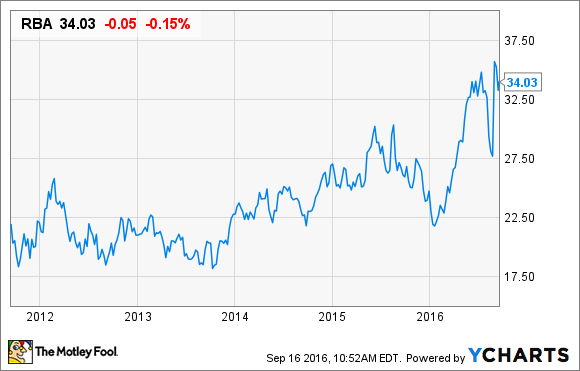 RBA's stock has risen over the last five years despite the overall market downturn in the months prior to 2016 as well as a plunge after the company reported disappointing quarterly results in early August. The large recent uptick was due to the announcement that RBA would be acquiring IronPlanet in a deal worth $759 million, which sent its stock price soaring 23% the day it was announced.

The stock price spike was warranted, in my opinion, because it seems to be a great acquisition that will only add to RBA's network effect. RBA operates in a highly fragmented industrial auction industry, and its size makes it attractive to customers looking to sell their products quickly and at good prices. Because of RBA's attractiveness to sellers, it lures the largest buyer base in the world to its auctions -- a virtuous cycle, if you will.

That network effect has only improved with the acquisition of IronPlanet because the latter gives RBA a foothold in different business segments such as government and private label dealer auctions. Further, IronPlanet made its name in pure online auctions, which is one development that RBA was focused on in recent times. With the acquisition, it now has a solid path and experience to dominating the new frontier of online auctions, as well as its historical live auctions.

If you wanted to buy RBA today because it's a solid business, that's certainly understandable. But with synergies yet to be created and a new acquisition to fold in, on top of the significant jump in stock price, I would advise letting the dust settle and waiting for a potential market pullback to open a position.