Look to these recession-proof stocks to protect your investments in an economic downturn. 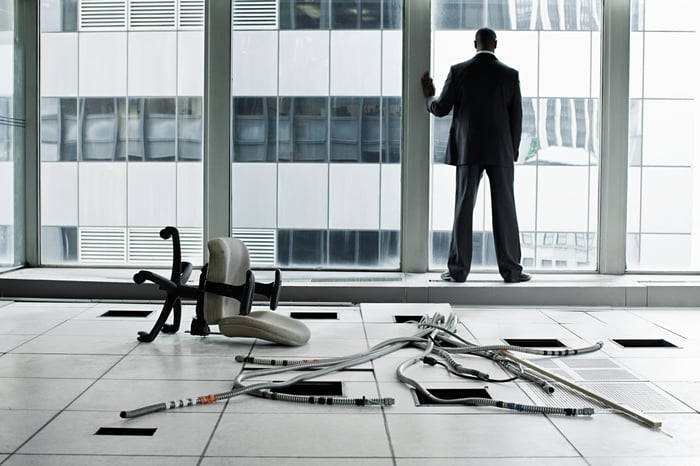 Concerns about a recession have been rippling through the market since the beginning of the year when the stock market entered a correction and oil prices were at rock-bottom levels. JPMorgan Chase predicted that there was a 67% chance of the U.S. hitting a recession by the end of 2017,  while the big banks generally agreed that 20% of the country was entering a recession, defined as two straight quarters of negative growth, this year.

That didn't happen. Oil prices have recovered somewhat, and the S&P 500 is back near record highs. Strong job growth has continued -- with the country near full employment and the unemployment rate at 5%.

Still, after seven years of expansion, cyclical forces are likely to send the economy into a recession at some point in the next few years -- the longest economic expansion in the modern era was the decade-long tech-boom in the 1990s. For investors looking to protect themselves from a potential recession, here are four stocks to consider.

The social networking leader may seem like an odd choice for a recession, but the company has as bulletproof a business model as any other and the job loss and downtime that come during a recession is only likely to promote the use of a service many already view as an easy diversion or a time waster.

Of course, monthly average users are nice but that alone won't drive Facebook's business. The company needs to bring in advertising dollars, and while some businesses cut ad budgets during an advertising downturn, there is significant evidence that doing so damages a brand long term. Just as Facebook has a unique opportunity to add new users during a recession, so brands have a chance to increase market share and customer loyalty by maintaining their marketing budgets, especially with an essential service. Rival Alphabet was able to maintain positive revenue and earnings growth during the last recession.

A high-priced growth stock like Netflix may be the opposite of what's generally considered a defensive recession-proof stock, but there are a number of reasons why the leading video streamer could thrive during a recession. Like Facebook, the company offers an easy escape for those who may be struggling in the job market or have additional free time.

Notably, movie theaters were some of the few businesses that boomed during the Great Depression as Americans sought escapist entertainment. Netflix has the ability to offer a similar benefit during a downturn, and it has a strong value proposition at a price of just $10 per month, compared to cable packages that now cost on average more than $100 a month. If tough times hit, it's easy to see how millions of Americans may decide to cut the cord and get a Netflix subscription instead.

Furthermore, Netflix could see benefits on the cost side of the equation as prices for content could easily come down as competition among peers decreases and producers become more eager to make deals and bring in the extra income that comes with a streaming contract. All in all, Netflix could emerge as a big winner during a recession. During the last recession, the company continued to grow revenue and earnings at a fast pace, and the stock barely flinched.

Wal-Mart is well regarded by the market as a strong stock to own during the recession. The retail giant has staked its reputation on Everyday Low Prices and is well known among consumers for its price competitiveness. The company tends to cater to a low- and middle-income population, but during a recession, its potential shopper base can swell as customers who might ordinarily spend their money somewhere else flock to Wal-Mart to save.

As a Dividend Aristocrat that has raised its quarterly payout every year for 41 consecutive years, the company has upheld its commitment to increase shareholder returns. It now offers a dividend yield of 3%, making it the typical defensive stock that investors turn to during a recession. The stock also has a beta of just 0.1, meaning there's little correlation between its performance and the broader market's.

The stock has also done well during the market pullbacks in the past. During the correction early this year, Wal-Mart was actually one of the few stocks that continued to gain as investors assumed it was a good bet during a potential downturn. Similarly, the retail giant weathered the 2008-2009 recession much better than the broader market.

Looking for a stock that actually directly benefits from tough times? Look no further than Portfolio Recovery Associates.

The company specializes in debt collection -- its business acquires, collects, and processes unpaid accounts receivables. A recession can create an opportunity for PRA as more accounts go unpaid. During the last recession, it was able to collect 13% more consumer debt by targeting banks and using more aggressive tactics.

It can take several years for the company to collect unpaid debts, meaning that a recession doesn't immediately provide a boon to its business, but as it creates more uncollected accounts, the company can take advantage by growing its portfolio, which can fuel its collections over the coming years.

A recession can also make debt cheaper, giving the company an additional advantage as debt prices were estimated to fall 40% during the last recession, and PRA stock also recovered quickly. Following the stock's recent drop, a recession could be just the thing to help PRA bounce back.