The deeper you dig into Bank of America's (NYSE:BAC) third-quarter earnings release (downloads as PDF), the better its performance appears. It still came up short of its profitability goals, but the gap is now due almost entirely to low interest rates and a heightened regulatory environment as opposed to the unforced errors that have weighed on Bank of America's bottom line for the past eight years.

With only a few exceptions, Bank of America's headline metrics moved in the right direction.

That Bank of America's return on assets came in at only 0.90%, which is less than the standard 1% threshold that the bank has set as its goal, thus speaks less to the fact that the Charlotte, North Carolina-based bank is nearly out from under the cloud that's followed it since the financial crisis and more about the incredibly inhospitable environment facing banks right now.

Things only got worse for the industry last quarter, after it was revealed that Wells Fargo had defrauded millions of customers in order to boost its cross-sell ratio -- the number of a bank's financial products the average customer uses. This will intensify regulatory focus on the industry, further driving up compliance costs and weighing on revenue, as banks temper their sales goals in response.

Stubbornly low interest rates are also exacting a heavy price. The federal funds rate, which is the primary short-term interest rate benchmark in the United States, continues to hover just over 0%, despite a quarter point rise last December. If it were to increase by just 100 basis points more, or 1 percentage point, Bank of America would clear an added $1 billion in profit each quarter. That would position the bank to meet its profitability goals.

The question that investors in Bank of America and other banks thereby need to wrestle with is: How much longer will interest rates stay low?

The Federal Reserve has intimated repeatedly over the past year that it's on the verge of a second rate hike to go along with its move last December. But economic anxiety over the United Kingdom's pending departure from the European Union and questions about lagging economic growth in China have created uncertainty in global financial markets, causing the Fed to proceed more cautiously.

We're now eight years into a period of unprecedentedly low rates. Admittedly, this pales in comparison to the two decades that Japan has seen rates remain at, near, or even below 0%. But this comparison should be a source of concern, not comfort.

We've been told over the past few years that interest rates are bound to "normalize" sooner rather than later. But the fact of the matter is that there is no such thing as a normal interest rate. Here's the chart of the fed funds rate dating back to 1955. You tell me what's normal: 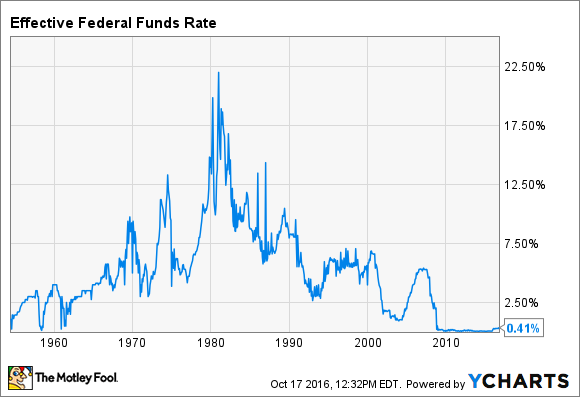 This is why Bank of America's earnings last quarter came as such a relief, as they showed that the nation's second-biggest bank by assets could bolster its top and bottom lines despite headwinds from interest rates and growing regulatory costs.

Bank of America's revenue was fueled by moderate growth in its loan book, but even more importantly by a 14% surge in its sales and trading revenue. This follows on the heels of similar results from JPMorgan Chase and Citigroup last week, both of which also reported double-digit increases in the money they earn from acting as market makers for institutional investors.

On the expense side, meanwhile, Bank of America further rationalized its distribution network. It closed 52 branches and 39 ATMS in the three months ended Sept. 30. Meanwhile, the number of customers who actively use its mobile banking app to deposit checks and transfer money, among other things, was up 16% to 21.3 million people.

These trends enabled Bank of America to continue to cull its head count, reducing it by an additional 1,500 full-time equivalent employees last quarter.

These efforts will help Bank of America offset the challenges it faces right now, but will be incredibly lucrative if and when interest rates do finally rise in earnest -- which, for what it's worth, I do believe will happen at some point over the next few years and particularly if the federal government gets behind fiscal policy that could bring us closer to the Fed's objective of 2% inflation.

Ultimately, the thesis underlying Bank of America's stock remains intact. With its stock trading for a 32% discount to book value, it's only a matter of time before investors reward it with a meaningfully higher multiple.