General Motors (NYSE:GM) said this week that its car-sharing program, called Maven, has expanded into San Francisco. The service, launched in January, is now available in a total of nine markets.

Maven is a GM-owned car-sharing service. It's similar to Zipcar in that it's a short-term car-rental service aimed at urban folks who might not own a car themselves.

How does it stack up against Zipcar and other services?

Like rivals, Maven members use a smartphone app to reserve and locate vehicles. But Maven takes advantage of GM's OnStar infrastructure to offer a somewhat more sophisticated and streamlined experience than Zipcar and other car-sharing competitors. 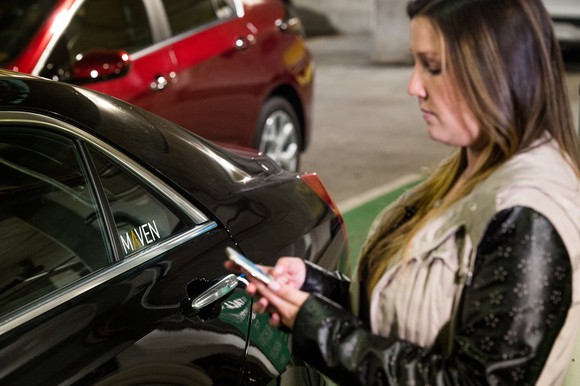 Maven, a GM-owned car-sharing service, is now available in nine U.S. markets including -- as of this week -- San Francisco. Image source: General Motors.

Unlike rivals that require that members carry a special card with a chip embedded, Maven members can use their smartphones to unlock the vehicles. Members can also use OnStar to help find a destination or extend the length of a reservation while driving.

Not surprisingly, Maven offers only GM vehicles. It's organized as a GM subsidiary, so it buys vehicles from GM and pays for their upkeep. GM gets the revenue from the vehicles as well as the profits from Maven's car-sharing business.

Where is it available?

Maven has grown quickly since its launch at the beginning of 2016. It's now available in Ann Arbor, Baltimore, Boston, Chicago, Detroit, Los Angeles, Washington, New York City -- and as of this past week, San Francisco.

Why is GM doing this?

Maven is one piece of a broader effort by GM to explore technology-enabled alternatives to traditional car ownership -- and to build businesses in the most promising areas.

Maven has a few different goals. First and most obviously, it gives GM a (fast-growing) presence in the profitable urban car-sharing business. Second, Maven helps expose young urban folks to GM's newest and most technically sophisticated products, including the latest Chevy Volt and (soon) the electric Chevy Bolt EV. The hope is that when those folks eventually move to the suburbs and buy their own vehicles, they'll be drawn to GM offerings.

Maven also helps support GM's substantial investment in ride-hailing start-up Lyft. Earlier this year, GM and Lyft began a program called Express Drive that offers Lyft drivers the ability to rent a suitable vehicle at a low weekly rate. That program is operated by Maven, and it's another way for GM to expose urban consumers to its latest and greatest products.

What does it mean for GM shareholders?

GM CEO Mary Barra has talked at length about GM's desire to "disrupt" its own business before new high-tech entrants can do so. Maven is one of several ongoing efforts by GM to put real, meaningful action behind those words.

For shareholders, it's good news: GM is moving more aggressively than many rivals to establish profitable beachheads in emerging alternatives to traditional car ownership. While GM doesn't currently report financial results for Maven separately, the initiative appears to be thriving.

Not all automakers will survive the wrenching changes that technological disruption will bring to the industry in coming years. Maven is one of several signs that GM is positioning itself to thrive as our idea of "personal mobility" evolves.