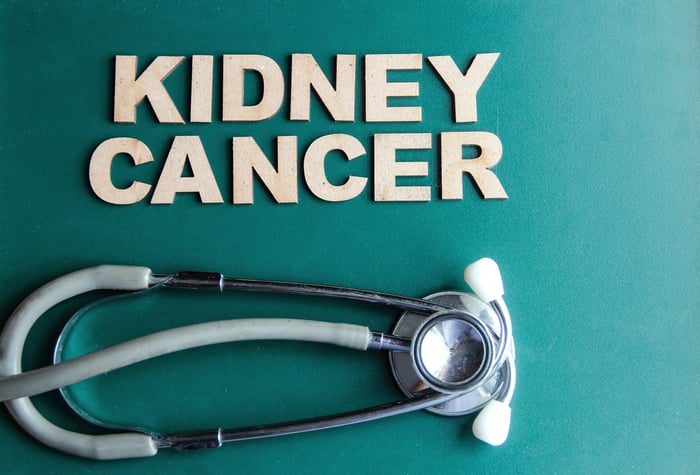 Only 12% of patients with advanced kidney cancer survive five years or more. Exelixis (NASDAQ:EXEL) hopes to increase that number, and based on its latest clinical trial results, the small biotech appears to be on the right track. That's great news for kidney cancer patients. But Exelixis' great news could present a big threat for Pfizer (NYSE:PFE) and Bristol-Myers Squibb (NYSE:BMY).

On Oct. 10, Exelixis announced results from its phase 2 CABOSUN study of Cabometyx in patients with previously untreated advanced kidney cancer. This clinical trial was structured as a head-to-head comparison between Cabometyx and Pfizer's Sutent, and Cabometyx emerged as the clear winner.

Right now, Sutent is the standard of care in fighting kidney cancer. Pfizer made $1.12 billion from the drug in 2015, and sales in the first half of 2016 were up 10% year over year. It should be noted, though, that these figures include sales for two other indications for which the drug is approved -- gastrointestinal stromal tumor and a type of pancreatic cancer.Exelixis should be in good position to take away a chunk of Pfizer's market share if Cabometyx wins approval.

Pfizer isn't the only Big Pharma company that could see its revenues threatened by the biotech, though.

Bristol-Myers Squibb gained FDA approval in late 2015 for Opdivo to be used as a second-line treatment for advanced kidney cancer. The drugmaker also has a phase 3 study in progress testing Opdivo and Yervoy as a first-line advanced kidney cancer treatment. Like Exelixis' CABOSUN study, Bristol's late-stage trial pits its regimen against Sutent.

Bristol's study isn't scheduled to wrap up until 2019. However, Exelixis will have a head start if Cabometyx is approved as a first-line treatment for kidney cancer. Therefore, the Opdivo regimen will probably need to outperform Sutent by more than Cabometyx did to be as successful as Bristol hopes it will be.

Pfizer and Bristol-Myers Squibb should both feel at least a little threatened by Exelixis' great results with Cabometyx. However, neither of the two big drugmakers will be hurt too badly if Exelixis' drug gains approval and does as well as expected. Both Sutent and Opdivo are approved for multiple indications (with possibly more on the way). And, unlike Exelixis, Pfizer and Bristol both have large product lineups and pipelines that help insulate them from the occasional threat that crops up to the sales of individual drugs.