Potash stocks are hugely popular among fertilizer investors thanks to large companies like PotashCorp, which have grown to dominate the global potash industry today. Recent quarters, however, have been tough for PotashCorp and other producers, as steep price declines crushed profits, sending potash stocks plummeting.

Compass Minerals is largely into salt while BHP and Rio Tinto are focused on coal and iron ore and have little stake in potash, which is why these stocks haven't been hit as hard as PotashCorp or Mosaic. Intrepid, on the other hand, is a pure-potash play, but is facing severe liquidity crisis, making it a risky stock to own. Agrium has proven to be the most resilient potash stock, and it would've been my top pick if not for its impending merger with PotashCorp. While that's a story I'll leave for another day, the long-term story for potash -- it's among the top three nutrients applied to crops to boost yields -- is still intact, making each of these stocks (except maybe Intrepid) good bets. However, only two of them look particularly compelling today.

PotashCorp has been in the news lately for its acquisitive approach to growth. After failing to acquire German-based potash producer K+S last year, PotashCorp is now merging with Agrium in a bid to create the world's largest publicly traded fertilizer company. The merger, if it goes through, will not only strengthen PotashCorp's position in the industry, but also give it access to Agrium's solid nitrogen assets and a high-margin retail business selling crop protection products and seeds. Exposure to the retail side should be PotashCorp's biggest win from the merger, as it'll reduce the volatility in its earnings from fertilizer price shifts.

Meanwhile, PotashCorp is nearing completion of a multibillion-dollar expansion program that'll increase its capacity significantly. That includes ramping up its largest mine, at Rocanville, Saskatchewan, Canada, which is expected to produce potash at a cost as low as $45 to $50 per metric ton once it's operating at full capacity. Compare that with the company's cost of goods sold of over $100 per metric ton of potash during the first half of this year, and you can imagine the kind of savings that PotashCorp could generate in the near future, especially if potash prices remain subdued.

Moreover, the wrap-up of major projects should also free up cash for PotashCorp, helping it sustain dividends. PotashCorp has slashed its dividends twice this year, but I don't think it'll get any worse, especially if it successfully merges with Agrium -- a company with relatively low leverage and a positive free cash flow. Based on its current dividend, PotashCorp's yield is 2.5%, which isn't bad given the weak state of fertilizer markets.

Thanks to its solid foothold in each of the three key nutrient markets of potash, nitrogen, and phosphate, long-life assets, expansion moves, and focus on costs, I believe PotashCorp could prove a great turnaround play as fertilizer markets bottom. The recovery could be slow, but there's little to indicate further downside in PotashCorp stock. In fact, with the stock just bouncing off its 52-week lows and trading at price-to-earnings and price-to-book-value multiples below industry average, it's a good time to enter.

Like PotashCorp, Mosaic is poised to benefit tremendously as fertilizer markets recover. While it's primarily focused on phosphate -- it is the world's largest phosphate producer by capacity -- it is also among the top three potash producers in the world, just behind PotashCorp and Uralkali. More important, potash has traditionally proven to be the more profitable nutrient for Mosaic: Its potash gross margin was 32% in 2015 versus its gross margin of 18% for phosphate. Needless to say, a recovery in potash markets would likely give a big boost to Mosaic's bottom line.

In fact, Mosaic is also expanding its low-cost facilities -- a move that has helped the company bring down its potash production cost (per metric ton) by almost 25% since 2014. 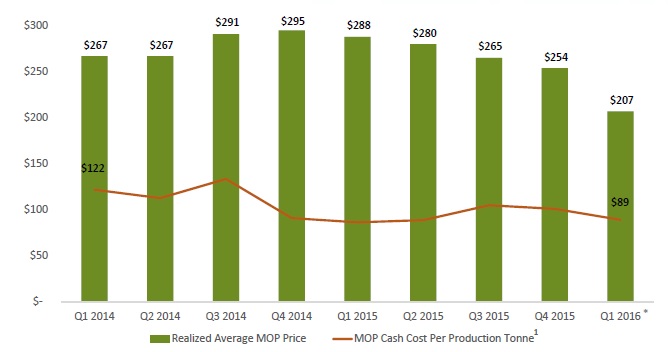 All of this sounds great, but there's a bigger reason that Mosaic is among my favorite potash stocks: its financial standing. Except in 2015, when it had a conversion rate of 81%, Mosaic has consistently generated greater free cash flow than net income over the past five years. That has encouraged the company to reward shareholders richly: Mosaic's annual dividend of $1.10 per share is 11 times its 2008 dividend per share. Given Mosaic's solid cash flows and tapering capital expenditures, I believe its dividends should continue to trend higher. The stock is currently yielding a solid 4.7%.

The best part is that Mosaic is trading really cheaply today. Its P/E of 15 is way below industry average, as is its price-to-book value of 0.8. Mosaic is equally attractive on a price-to-cash flow basis of six times compared to 12 times P/CF that the industry currently commands. I think that's a steal of a deal if you're seeking exposure to potash, or even fertilizers, in the long run.