One of these stocks is not like the other, though. Let me show you what sets NXP apart from AMD, and what kind of investor might prefer each of these chip tickers.

To be fair, NXP's recent revenue growth wasn't organic at all. The company merged with fellow embedded chip specialist Freescale Semiconductor in a $12 billion deal that closed last December. That combination should boost NXP's annual sales by approximately 66% by the end of 2016, though some investors might see it as the easy way to increase revenue.

By contrast, AMD pinned its second-quarter sales jump on strong demand for its graphics products and semi-custom processors. That's a clean serving of organic growth, which is a high-quality revenue booster.

But before we jump to conclusions about AMD's sales growth being much more desirable than NXP's version, let me put the two companies into a historical context: 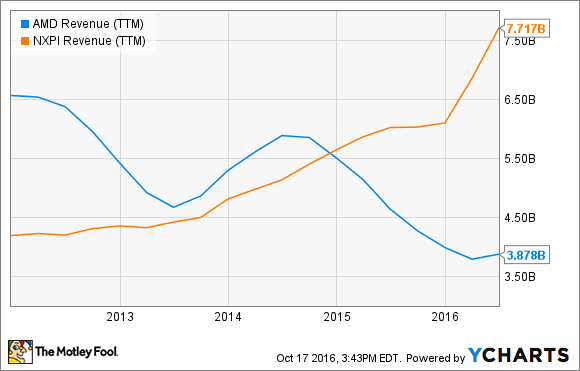 Going beyond the numbers

AMD's recent sales bump was a welcome respite from many quarters of plunging revenues. The company has been in freefall for years and is a turnaround story that never quite seems to find a happy ending. The current uptick rests chiefly on semi-custom chips that are shipped into the video game console markets. This year's surge is likely to peak in the third quarter, as the console builders put together their product reserves for the holidays.

In short, AMD has no choice but to bet the farm on gaming consoles even though mobile gaming seems constantly poised to destroy the traditional console market. Game publishers and console makers are pulling out all the stops to stem the mobile tide, but how long will that effort last?

And what are the chances that AMD finds a way to exploit the mobile hardware market before it's too late?

It sure hasn't happened yet.

Over on the NXP side, that company is betting big on the exploding market for automotive computing.

The Freescale acquisition put NXP in an unchalleneged leadership position of that fragmented sector, and the future is wrapped in chrome and leather. For now, car-related chips tend to focus on infotainment system, in-car networking, data security, and engine controls. Not that far into the future, the demand for car-specific chips will skyrocket as self-driving cars go mainstream -- and NXP is sitting pretty at this critical juncture.

Long story short, AMD is a risky turnaround bet while NXP is a tantalizingly pure play on one of the largest market trends of this decade.

Both companies have been at the receiving end of buyout rumors in recent months. Let's be generous and assume that both NXP and AMD receive serious offers. Even so, it would make sense to give NXP investors a roomy buyout premium while AMD's buyer should get a risk-related discount.

NXP is a sensible option for many investor temperaments, including value hunters, buyout gamblers, and long-term growth visionaries. Meanwhile, only the gamblers need to worry about AMD's shares. The potential rewards there are more than balanced out by heaps of market and execution risks.