Netflix (NASDAQ:NFLX) just crushed expectations for its third quarter, sending shares up about 19% on Tuesday at the time of this writing. The streaming-video giant added about 3.6 million new subscribers, or about 1.3 million more than the company guided for.

As investors digest the implications of this big quarter, here's a look at some useful quotes from management during the company's conference call following the earnings release on Monday afternoon.

In Netflix's third-quarter shareholder letter, management cited "stronger than expected acquisition due to excitement around original content" as a primary driver for the company's higher-than-expected growth in members. What's particularly notable is that this original content is having a positive impact globally.

[O]ne of the really encouraging points was our big series that we had going on in the quarter -- Luke Cage, Stranger Things, The Get Down, Narcos of course -- the great thing is that they performed proportionally well globally. So, at least the content is traveling in a way that we had hoped.

The fact that Netflix's original content is driving customer acquisition not just in the U.S., but globally, is good news for investors since the company is aggressively expanding original content. Netflix plans to release over 1,000 hours of original programming in 2017 -- up from over 600 hours in 2016.

When Netflix CEO Reed Hastings was asked about what specific markets were driving international outperformance in subscriber growth, he refrained from calling out markets, citing "competitive reasons." But Hastings did emphasize that continued localization of international markets is a catalyst today and should continue to be in the future.

I would say we're having broad success around international. We're continuing to make those investments. We've got a lot of room to go to improve the service. We mentioned in the letter that we've only just now localized Poland and Turkey. That brings us up to 22 languages -- YouTube is at 50. We've got a long way to go in that localization effort.

Interestingly, Hastings went out of his way to apologize for the stock's recent volatility as he seemed to admit that the company's inaccurate guidance for quarterly subscriber growth in the last couple quarters has been a key force behind big stock price swings. But Hastings said he believes a more consistent annualized growth rate could potentially give investors a better baseline for longer-term estimates and possibly help mitigate this volatility.

I think we can all see that, you know, it's time for me to apologize for the volatility again. This time it's in a good direction. But I think more and more investors are able to look at the multiyear picture -- and they see the patterns emerging. So then it will be less and less about our guidance. 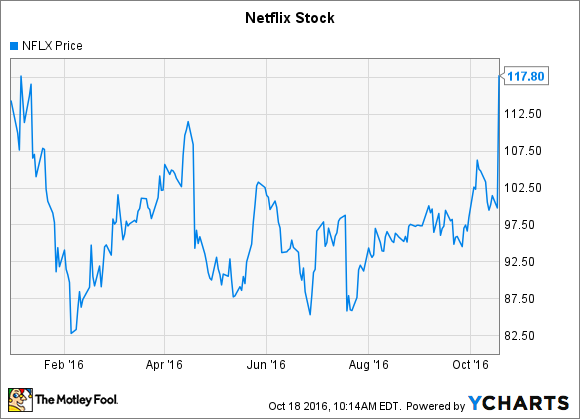 Overall, the greatest takeaway from Netflix's conference call was a key idea for long-term investors: the streaming-video company may see volatility on a quarter-to-quarter basis, but the fundamental organic growth of on-demand internet television, combined with Netflix's own expansion efforts with original content and localization of international markets, should continue to drive steady year-over-year growth.