Shares of Omnicom Group (NYSE:OMC) fell around 2% Tuesday morning, after the marketing and communications company reported third-quarter 2016 results. But as per usual, Omnicom's top and bottom lines continued to edge higher on a year-over-year basis despite the negative effects of foreign currency and stubborn macroeconomic headwinds. 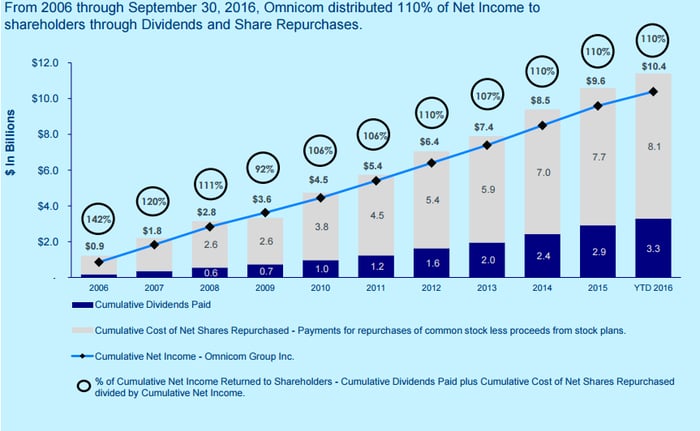 [Organic growth] was broad based across our major regions and disciplines. This growth highlights the consistency and diversity of our operations, even in the face of tepid economic conditions and the uncertainty created by events in our two largest markets: the presidential election in the United States and Brexit in the U.K. Our performance underscores the strong competitive position of our agencies across the spectrum of advertising and marketing disciplines and key geographic markets, as well as our digital and analytical expertise.

Later in the call, Omnicom CFO Phil Angelastro also elaborated that volatility in foreign currencies has steadily decreased over the past year, though "the continuing slide of the British pound after the Brexit vote in late June remains a notable exception." More specifically, the foreign exchange impact of the pound's decline alone reduced revenue in the quarter by roughly $60 million.

Omnicom isn't in the habit of offering specific financial guidance. But Angelastro did add that assuming rates remain steady, foreign exchange will likely reduce revenue by around 1% in the current quarter. Of course, management offered similar words of caution last quarter regarding currencies and macro headwinds, and they're right to take a more prudent approach to forecasting expectations for the coming quarters.

In the meantime, I think investors should be pleased with Omnicom for continuing to achieve modest growth in today's tough business environment, even as it insists on sustaining its generous capital-returns initiatives.