Alliance Holdings GP (NASDAQ: AHGP) and its MLP Alliance Resource Partners (NASDAQ:ARLP) pay their investors very generous quarterly distributions of 8% and 7.7%, respectively. However, there's a case to be made that those payouts are a bit too generous, given the current state of the coal market and Alliance Resource Partners' contract backlog. Because of that, investors should not consider Alliance Holdings GP nor its distribution to be safe bets over the long term. Here's why.

Digging into the contract situation

Last quarter Alliance Resource Partners reported pretty solid results, all things considered. Coal sales volumes rose 6.4% sequentially, which when combined with lower operating expenses drove a 42.2% improvement in the company's distributable cash flow. Because of that, the company maintained a very healthy distribution coverage ratio of 2.3 times. Furthermore, the company anticipates that it should continue covering the payout by at least 2.0 times for the remainder of the year. That is important to Alliance Holdings GP because it counts on the distributions it receives from its MLP to fund its own distribution.

Driving Alliance Resource Partners' improving coal volumes was its ability to secure additional coal sales contracts during the quarter. In fact, it was able to basically sell out its 2016 capacity at about 35.5 million tons. That said, the potential problem lies in its volume contracts for 2017 and beyond. Currently, the company has contracts in place for 24.3 million tons next year, which declines to 15 million tons in 2018 and just 7.9 million tons in 2019. While those contracts provide the company with some future revenue security, there is the potential that it might not sell out its coal volumes next year, and even if it does it might not obtain as high a sales price as it did this year. In other words, its distributable cash flow could decline significantly next year. That could force the company to cut its payout, which would force Alliance Holdings GP to follow its lead.

Driving the concerns surrounding future sales volumes is the current forecast for the coal market. According to the U.S. Energy Information Administration's current short-term energy outlook, coal producers are expected to boost production next year after two years of deep declines: 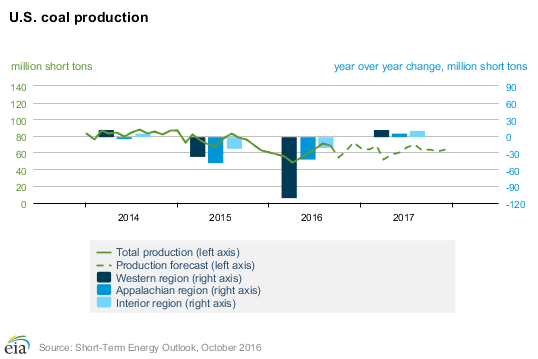 At the same time, the EIA sees minimal improvement in coal consumption: 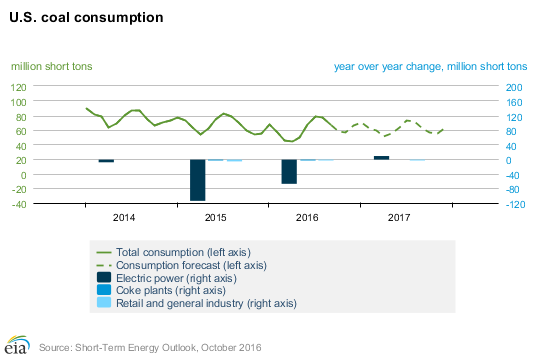 Not only is that incremental demand likely to not be enough to offset rising production, but the EIA is also forecasting a 5% decline in U.S. coal exports. That could put even more pressure on the coal market and cause coal prices to continue weakening over the next year.

The longer-term outlook for coal is even worse. In ExxonMobil's (NYSE:XOM) outlook for energy through 2040, it forecasts coal's share of the global power generation market shrinking from 40% down to 30% as renewables and natural gas continue to steal market share. Because of that, ExxonMobil sees coal demand shrinking by 0.2% per year, while gas demand grows by 1.6% annually and renewable demand increases by 4.8% per year.

Meanwhile, the long-term forecast for coal demand in America is even bleaker, according to the EIA, which expects it to decline by 25% through 2040 as the country retires more coal-fired power plants and replaces them with gas or renewable generation. Overall, it sees coal only generating 26% of America's power by 2040, compared to 37% in 2012. However, that outlook could be downright optimistic given the rapid growth in gas and renewable generation, as well as growing climate change concerns. Because of those factors, coal demand in the U.S. could decline much more rapidly than the current forecasts predict, which could weigh on coal prices and volumes at Alliance Resource Partners for years to come.

Alliance Holdings GP is not for the faint of heart. Because of the significant drop in its secure coal volume contracts over the next few years, the company's current distribution is not on solid ground and could get cut again within the next year if the company is not able to sell all of its volumes at sufficient prices. Worse yet, given the outlook for the coal market, the company's long-term sustainability is questionable, especially if coal power plant retirements in the U.S. accelerate quicker than currently anticipated.