One-time Wall Street darling Spirit Airlines (NYSE:SAVE) has fallen out of favor with investors since the beginning of 2015. As the budget carrier's earnings growth cooled off -- and ultimately went into reverse -- the stock lost more than half of its value. Spirit Airlines stock still sits more than 45% below its late 2014 high. 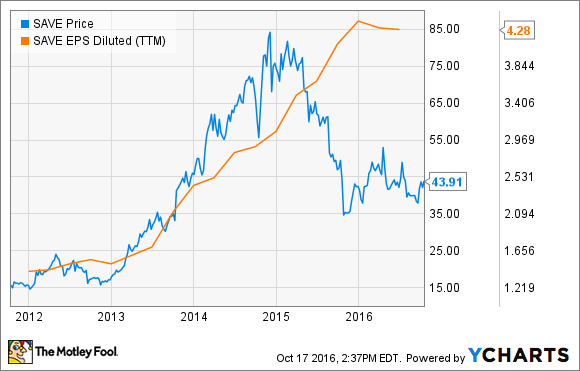 However, Spirit's unit revenue trajectory is starting to improve following several quarters of double-digit declines. A variety of factors should help Spirit return to unit revenue and profit growth within a quarter or two, including slower expansion, better industry pricing, and a shift away from taking on global airline giants in their strongest markets.

On Monday morning, Spirit Airlines reported that its total revenue per available seat mile (TRASM) declined about 7% year over year in Q3. That exceeded the company's initial forecast for TRASM to fall by about 9%. It also marked a strong sequential improvement, after TRASM plunged 14% year over year in the first half of 2016.

Spirit attributed the better-than-feared results to improving demand for last-minute bookings as well as the company's own revenue initiatives.

Slower growth also undoubtedly helped. Spirit increased capacity 24.7% year over year in the first half of 2016, compared to a 16.2% increase in Q3. Slower growth is helping Spirit to fill a higher percentage of seats on its planes. Additionally, new markets tend to have lower fares at first. A lower growth rate reduces the dilutive effect of new routes on unit revenue.

This fall, Spirit Airlines is taking a page out of the playbooks of JetBlue Airways (NASDAQ:JBLU) and Southwest Airlines (NYSE:LUV) by ramping up service in Florida. Warm-weather leisure markets like Florida are counter-seasonal relative to the bulk of U.S. airline routes, with relatively strong demand during the winter.

Just as importantly, the Florida leisure travel market isn't strategically vital to any of the legacy carriers. That's why JetBlue and Southwest have been able to take such a big share of that traffic. In recent years, Spirit has faced vicious competitive responses from legacy carriers when growing in their hub markets. JetBlue and Southwest aren't likely to respond as aggressively.

Nearly all of Spirit's new routes this fall will serve either Orlando or Fort Lauderdale. Some of them -- such as Boston-Orlando, Philadelphia-Orlando, and Kansas City-Orlando -- will entail direct competition against either Southwest or JetBlue. Spirit's new routes from Newark to Fort Lauderdale and Orlando will face off against both of those rivals, but Newark is a unique market that has been underserved for years due to slot constraints.

However, Spirit is also trying to diversify into smaller markets where it will face little or no direct competition. Thus, it is launching nonstop service from Akron-Canton Airport (a secondary airport for the Cleveland region) to four Florida destinations next month. Flights to Las Vegas and Myrtle Beach will start next spring. Many of the routes Spirit is adding in Akron-Canton have been cut by Southwest Airlines in recent years.

Spirit Airlines is also adding nonstop service to Orlando from Niagara Falls, New York, and Plattsburgh, New York, next month. These flights seek to capture demand from bargain-hunting consumers in the Toronto and Montreal metropolitan areas who are willing to drive an hour or two to catch a cheap flight to Florida.

Improving industry conditions, slower growth, and the route reshuffle to emphasize smaller markets and Florida leisure travel should drive further sequential improvement in Spirit's revenue trajectory. As a result, Spirit Airlines should return to unit revenue growth by Q1 2017, if not in the current quarter.

Looking further ahead, Spirit has a number of new ancillary revenue initiatives in the works. Beginning next year, these should counteract Spirit's recent decline in non-ticket revenue.

Stronger revenue growth will pave the way for Spirit's return to earnings growth in 2017. As investors become more confident in the company's outlook, Spirit Airlines stock could soar just as quickly as it crashed in 2015.