In Part 1 of this series on sharpening your airline investment acumen, we tackled the first five points in the following checklist. We learned that different airlines tend to churn out operating profits in a surprisingly tight range, and we reviewed how to evaluate an airline's borrowings, among other topics. In this second and last part of our series, let's move on to items six through 10 in the checklist: 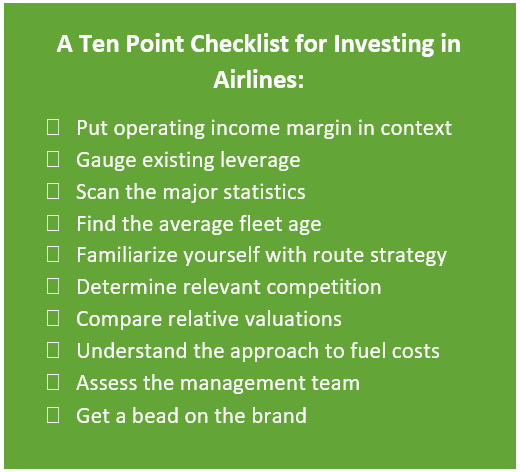 As with any other stock investment, it's helpful to identify an investment candidate's immediate competition. In the aviation universe, segregate low cost carriers (LCCs), ultra-low cost carriers (ULCCs), and network carriers, and compare like to like before and during your investment holding period.

What are the most important areas to compare? For starters, I'm partial to operating income margin, balance sheet items, and major statistics (for a refresher on these, see Part 1 of this series). The longer you invest in this industry, the more significant items you'll find to compare. For more guidance on how to line up two airlines to make an investment decision, here's a recent "Better Buy" analysis I performed on Delta Airlines and American Airlines (NASDAQ:AAL) that you can use as a template.

Lately, investors appear to be discounting airlines versus other alternatives. Most airlines, regardless of category, currently trade at forward price-to-earnings (P/E) ratios in the mid-single digits or low double digits. Thus, it can be deceptive to take a single carrier's forward P/E ratio in isolation and arrive at the conclusion that the company is undervalued.

Similar to operating income margin, as we discussed in Part 1, airline valuations also move in a tightly packed herd. The prospective shareholder's task is to understand, relative to other airlines, why an investment candidate's valuation may lie too far outside either end of the band in the following chart: 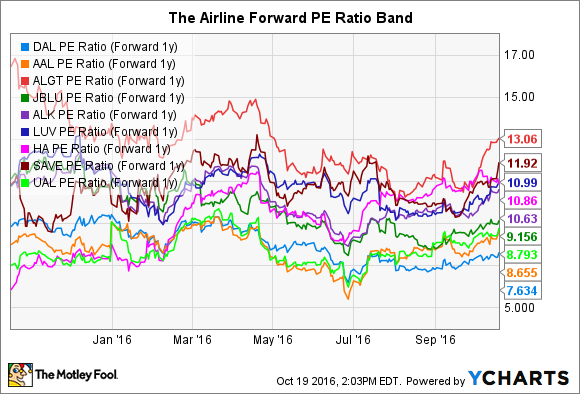 As of this writing, the aggregate one-year forward P/E ratio of S&P 500 Index companies stands at 16.6. One could draw the conclusion that airlines as a whole are beginning to look undervalued versus other industrial and service sectors. But it doesn't hurt to pit the valuation of a single airline symbol against similar candidates, to get a feel for how underpriced or overpriced it may be relative to its peers.

8. Understand the approach to fuel costs

If you plan on holding stock in a carrier for a number of years, take the time now to become familiar with how the organization handles its fuel costs. During periods of rising jet fuel prices, airlines hedge their risk actively, attempting to lock in costs. This can be thought of as part of the cost of running a stable business. However, when oil prices decline and remain weak, aggressive hedging against upside risk can prove an unnecessary drag on an airline's unit economics. In other words, it can needlessly push up a carrier's costs per mile flown.

An investor should look for a fuel cost strategy that avoids over-hedging when prices are low yet assumes adequate protection when oil prices creep up. American Airlines left off hedging in 2014, thus avoiding the billions of losses on unneeded fuel hedges its peers incurred in the years since. This was a prudent move, but should oil spike again in the near future, investors will clamor to see fuel hedges return to American's P&L.

It's helpful to understand the depth, experience, and strategic bent of the management team that directs the airline you invest in. Does management have the proper incentive to increase earnings, while simultaneously building up shareholder value?

At Fool.com, we typically provide much coverage of management decisions, from our earnings reports to articles that summarize the most important points executives make during quarterly earnings conference calls. Reading our coverage, or going directly to earnings call transcripts, can help you assess the competence of an airline's management team, and you'll learn much about the industry itself in the process.

An airline's brand is an intangible asset that can have a substantial impact on profits and, consequently, stock price. There are many factors that can influence brand perception among travelers, but safety, on-time performance, and overall customer satisfaction tend to outweigh other factors.

Thus, be wary of undertaking a long-term investment in an airline you wouldn't regularly fly yourself. I've long been a fan of Alaska Air Group (NYSE:ALK), parent company of Alaska Airlines. The airline enjoys a strong brand not because of flashy marketing, but a well-deserved reputation: It consistently ranks at the top of various industry surveys for the three factors of safety, on-time flights, and customer satisfaction.

In short, to gain a holistic picture of a specific carrier, consider brand perception alongside the operational and financial considerations we've discussed.

As you've probably realized by now, this checklist isn't about absolutes. Rather, it seeks to make sure you have a structured way of evaluating carriers that may offer handsome returns, while avoiding some of the pitfalls associated with this industry. Don't be afraid of the extra effort that's implied in gaining a deeper knowledge of these topics. At present, the industry as a whole seems to offer reasonable value, so grab a ticker you're interested in, and start ticking items off the list!