Shares of the two largest U.S. department store companies -- Macy's (NYSE:M) and Kohl's (NYSE:KSS) -- have been under assault for the past year and a half. Same-store sales are declining for both chains, and many investors are worried that neither one will recover, due to the rise of e-commerce and off-price retailers. 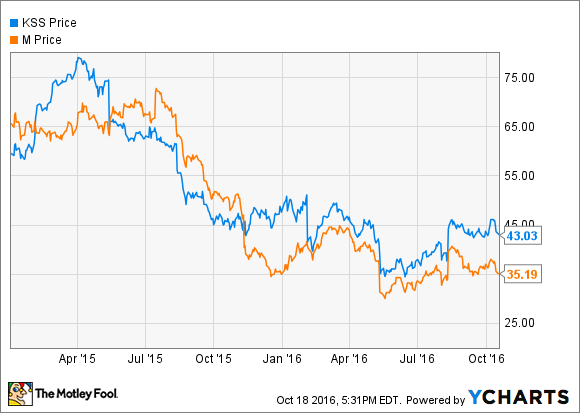 Macy's and Kohl's shares did rally in August after department stores posted better-than-feared Q2 earnings results, but they haven't been able to keep up the momentum. Just last Friday, both stocks slumped by more than 3% after analysts at JPMorgan Chase reduced their Q3 sales estimates. So far this week, both stocks have declined further.

Fortunately, relief may be just ahead. There will be two extra days between Thanksgiving and Christmas in 2016 relative to last year. Based on historical patterns, that could provide a nice boost to holiday spending.

This means that there will be an extra two days during the peak holiday shopping season. Furthermore, there will be five Saturdays during that period (including Christmas Eve), compared to four last year. That's particularly important because the Saturday before Christmas recently overtook Black Friday as the biggest shopping day of the year.

The theory that having more time between Thanksgiving and Christmas boosts holiday sales goes back at least as far as the 1930s. In 1939, President Roosevelt moved the Thanksgiving holiday up by a week in order to help retail sales, with mixed results.

Not surprisingly, analysts disagree about the impact of Thanksgiving's timing on retail sales. Some argue that a shorter holiday shopping season makes stores more crowded, but has no impact on total sales. Others believe that the data shows a clear benefit to having a longer period between Thanksgiving and Christmas, especially when there is an extra weekend.

Macy's and Kohl's holiday sales results from 2012 -- the last time a leap year added two days to the holiday shopping season -- suggest that having extra shopping days does boost sales. In Q4 2012, comp sales rose 3.9% year over year at Macy's, compared to 3.7% growth through the first three quarters of the fiscal year. At Kohl's, sales trends accelerated even more sharply. Its comp sales rose 1.9% in Q4 2012, compared to a 0.5% decline in the first three quarters.

The strong Q4 2012 sales trends at Macy's and Kohl's were particularly impressive given that Superstorm Sandy struck the Northeast at the beginning of that quarter. The storm disrupted retail sales in November and had lingering effects in hard-hit areas, where people had to spend money on home repairs rather than holiday gifts. Worries about the looming "fiscal cliff" also weighed on consumer sentiment during the quarter.

Macy's and Kohl's could use all the help they can get

The data isn't completely clear, but having extra time between Thanksgiving and Christmas certainly can't hurt retail sales, and it might help a lot. Macy's and Kohl's could use the boost, after nearly two years of declining sales.

Year-over-year comparisons will get a lot easier for most department store chains beginning in the fourth quarter. That already gives them decent odds of returning to same-store sales growth. The extra lift from a longer holiday shopping period could help seal the deal, giving Macy's and Kohl's investors something to cheer about -- and perhaps dispelling fears that the entire department store industry is about to collapse.