After microprocessor giant Intel (NASDAQ:INTC) reported its financial results for the third quarter of 2016 and offered a forecast for the fourth quarter, the company's shares dropped more than 5% in after-hours trading.

Although Intel reported strong financial results (revenue for the quarter was better than guided, for example), the drop -- at least in the near term -- appears to be justified. Here's why.

So why is the stock taking a drubbing if it actually beat analyst estimates?

Analysts were expecting Intel to guide to revenue of around $15.86 billion for the fourth quarter of the year; Intel guided to $15.7 billion -- missing expectations, albeit slightly. Investors often place greater value on future performance and less on past performance, which is probably a large reason the stock is selling off.

However, the problems run a little bit deeper than a headline guidance miss; there was a pretty significant red flag in the company's earnings report -- particularly in its results for its highly important data center group business. (If you're unfamiliar with why this segment is so important to Intel and its investors, read this.)

During the first half of the year, Intel's data center business delivered disappointing revenue growth relative to its long-term 15% compounded annual growth rate guidance and even its full-year guidance of low-double-digit percentage growth -- 9% in the first quarter and just 5% in the second quarter.

Despite those lackluster results in the first half of 2016, Intel management insisted that it could still hit its double-digit growth target for the year as a result of a significant reacceleration during the second half of the year. Intel's data center group achieved just 10% year-over-year growth in the third quarter and, unsurprisingly, guided down full-year expectations to just "high-single-digit growth."

Although the better-than-expected results in the company's personal computer chip business helped to bolster the quarterly results -- even the "worse than expected" fourth-quarter guidance still represents a healthy number -- investors are very sensitive to the performance of the company's data center group.

Remember, Intel and many investors have basically written off hopes of ever seeing its PC business as a "growth" business again -- it's a large cash cow that's going to milked for every last dollar of operating profit that it can reasonably produce.

The data center group, on the other hand, represents the company's best hope over the long term at sustainable growth, since the markets it serves are generally growing. If this shows signs of faltering, then Intel's growth prospects may appear dimmer -- leading to a lower share price.

Although the headline results might seem bad, things look better when one takes a look under the covers. The bulk of Intel's data center group revenue comes from the sale of processors, and according to the company's 2015 investor meeting, those processor sales can be broken down into three major categories:

Intel's prior forecast called for each of these segments to represent roughly a third of the processor revenue that its data center group generates in 2016. 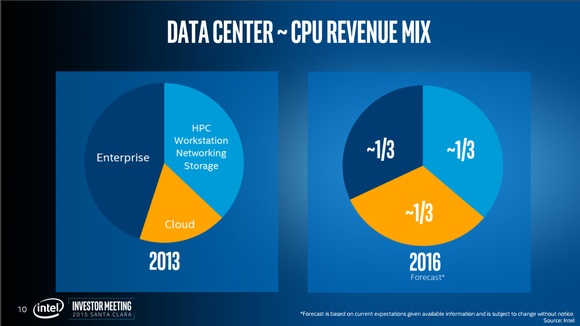 According to Intel, although the second two categories performed well -- and they're generally viewed as the healthy and growing sub-segments of Intel's data center business -- the enterprise server portion of its business came in worse than expected. Intel says it was looking for enterprise-related revenue to be roughly flat, but it wound up declining about 3% in the quarter.

The good news here is that the sub-segments that have historically been growing are still growing, so it's not as though these results cast doubt over the long-term trends that this business is expected to benefit from. It just so happens that one generally problematic and disappointing sub-segment was a little more problematic and disappointing than is usually the case.

So although the data center results were disappointing, they're hardly cause to freak out over. If you liked Intel's long-term prospects before the earnings report, then this one "miss" really shouldn't change that fundamental view.