After the bell on Nov. 1, investors will learn whether industry watchers set the bar low enough for Gilead Sciences (NASDAQ:GILD) to overdeliver on sales and earnings. Can Gilead Sciences deliver market-beating results, or will the company's financials signal another leg lower for the big-cap biotech?

Gilead Sciences' launch of two megablockbuster hepatitis C drugs made it a biotech darling in 2014. However, the arrival of cheaper hepatitis C drugs from AbbVie (NYSE:ABBV) and Merck (NYSE:MRK)has relegated the company's shares to the bargain bin in 2016.

Gilead Sciences launched its top-selling Sovaldi in late 2013 with a $84,000 wholesale price, and it followed that up by launching Harvoni in October 2014 with a $94,500 average wholesale price. Since then, AbbVie launched Viekira Pak to compete against Harvoni with a lower price that secured it exclusivity on Express Scripts' drug formulary, and Merck launched Zepatier, with a wholesale price of only $54,600, in February.

Those launches forced Gilead Sciences to discount its drugs, and as a result, Harvoni's sales fell by about $1 billion year over year, to $2.56 billion in Q2, and Gilead Sciences' $7.7 billion in companywide second-quarter sales was down from $8.13 billion a year ago.

In the wake of those results, analysts have been ratcheting down their earnings outlook for the remainder of this year and next year. Currently, the company's expected to post $7.5 billion in Q3 sales, down 9.4% year over year. Analysts have also lowered their EPS expectations for Q3 to $2.88 from $3.01 over the past 90 days.

Unfortunately, those estimates aren't very reassuring to investors, who are eager to see a reversal in Gilead Sciences' 28% decline this year. 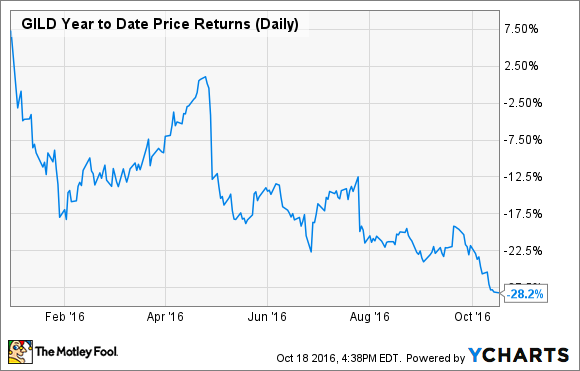 It's possible that Gilead Sciences has fallen so out of favor with investors that the company will be able to overdeliver on analysts' anemic outlook. However, for that to happen, the company will need to deliver greater growth in HIV, a fast ramp-up in sales of Epclusa (its recently launched second-generation hepatitis C drug), and cost-cutting.

Over the past year, Gilead Sciences has been refreshing its lineup of combination HIV therapies by replacing its widely used Viread with TAF, a new formulation of Viread that works as well, but that's safer and therefore can be used in sicker patients. Thanks to TAF-based products, Gilead Sciences HIV sales grew 15% year over year in Q2.

Gilead Sciences can also offset pricing headwinds if Epclusa, a pan-genotypic hepatitis C drug approved by the FDA this summer, got off to a fast start. Gilead Sciences is positioning Epclusa to replace Sovaldi in genotype 2 and 3 patients, and since it carries a higher price tag than Sovaldi, a quick ramp-up in sales could support margins and boost earnings. According to Credit Suisse, while Sovaldi's prescription volume fell 37% quarter over quarter in Q3, combined Epclusa and Sovaldi prescription volume grew 19% versus Q2.

The company could also get some help if management accelerated cost cuts to selling, general, and administrative (SG&A) expenses, and slowed increases to spending on research and development. Exiting Q2, management lowered its SG&A spending target for the year by as much as $300 million.

The headwinds facing Gilead Sciences in the short term are significant, but if HIV sales, Epclusa revenue, and belt-tightening boost the bottom line, it may give shares a much-needed kick start.

If Q3 financials disappoint yet again, then shares could struggle for a bit longer. However, investors might be served best by staying the course. After all, Gilead Sciences shares have suffered bumps and bruises in the past, yet investors are still up 265% since 2011, and that's far better than the 86% return for the S&P 500.