Another quarter, another set of results from Illinois Tool Works (NYSE:ITW) characterized by good margin expansion due to the company’s enterprise initiatives. The end result is another quarter of high-single-digit EPS growth, even while organic revenue continues to grow in low single digits. Let’s take a look at the details of the quarter to see how Illinois Tool Works is managing to grow earnings ahead of its end markets. 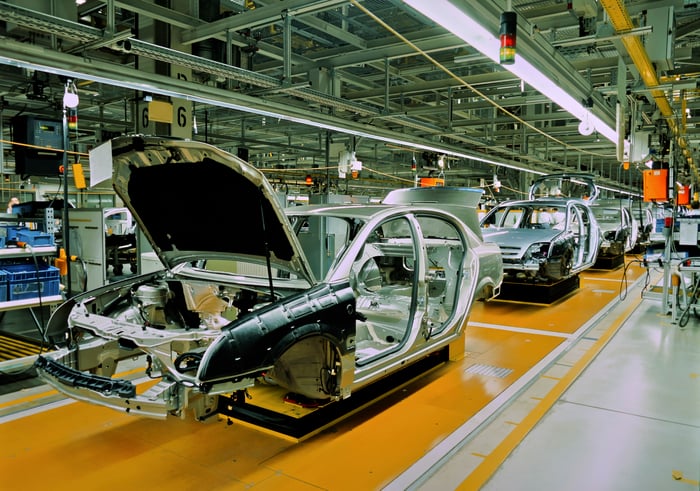 Starting with the headline numbers from the third quarter:

In short, margin expansion aided earnings growth in excess of revenue growth. Turning to guidance, for the third quarter in a row management slightly increased its full-year expectations:

As you can see above, the midpoint of full-year EPS guidance was increased to $5.61 from $5.60. It’s no big deal, but it stands out in a year when many industrial companies have been lowering guidance.

If the key story this year has been margin expansion, then it makes sense to delve into just how Illinois Tool Works generated 120 basis points of margin expansion (excluding acquisitions) in the quarter. The answer is that the 120 bp were due to enterprise initiatives -- part of a five-year plan to realign product lines in order to expand margin and grow. However, the 10 basis-point expansion due to pricing was perfectly offset by volume decline.

In other words, the margin was solely due to self-help initiatives rather than improving market conditions. 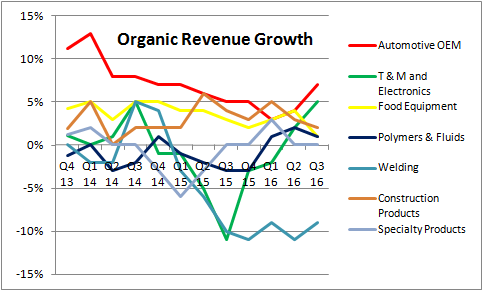 As discussed previously, Illinois Tool Works has produced pretty steady growth in its construction, food equipment, and polymers and fluids segments in recent quarter. Those trends continued in the third quarter, albeit with all three segments delivering slightly disappointing organic revenue growth figures.

However, there was better news from the test and measurement and electronics and welding segments. As you can see in the chart above, test and measurement and electronics continued its return to revenue growth; the chart below shows a 440 basis-point expansion in reported operating margin in the quarter -- enterprise initiatives contributed 190 basis points to the expansion. 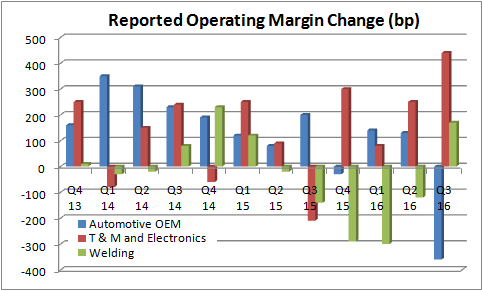 Finally, the automotive sector continued its strong run by generating 7% organic revenue growth. The chart above shows a dramatic 360 bp decline in reported margin, but organic operating margin was actually up 30 bp -- the reported decline is largely attributable to a 370 bp drop due to integrating the acquisition of an engineered fastener and components business.

Moreover, as you can see below, the company’s growth continues to exceed industry build rates, and given some market concerns over future auto production rates, the company may need to continue to exceed such rates in the future.

CEO Scott Santi sounded a positive note on the issue during the earnings call: "Certainly we will be impacted on a relative basis based on the overall build levels in the market. But our ability to continue to outgrow whatever the market growth rate is, if it flattens out, we would still expect to be positive by 200 to 400 basis points."

All told, it was a pretty solid quarter for Illinois Tool Works. The company continues to expand margin in a low-growth environment, and for that you have to thank its management rather than its end markets.