It's not often a company lowers its full-year organic revenue guidance but increases its EPS guidance, but that's exactly what happened with Illinois Tool Works (NYSE:ITW) when it last gave results in July. In short, the company's stock-price performance has trumped its peers' thanks to its ability to expand margin.

Can the stock keep up its impressive run? With the earnings release coming up on Oct. 20, let's look at what the company needs to do. 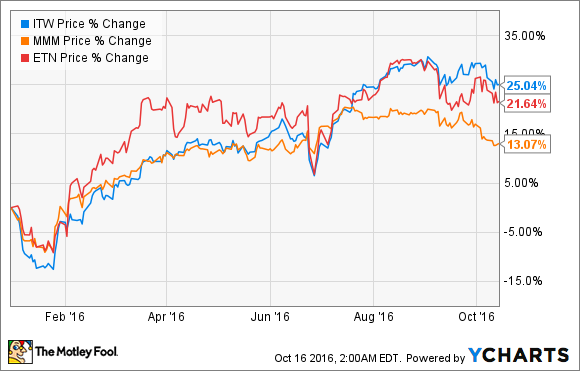 As we shall see shortly, the company's performance in 2016 has exceeded expectations. After a rough period at the end of 2015, in which full-year 2015 earnings guidance was cut, management has flipped the script in 2016 and raised its 2016 guidance twice in the past two quarters.

That said, the stock's price appreciation has now left it looking absolutely and relatively expensive. It's now more expensive than 3M Company (NYSE:MMM), a stock it historically trades at a discount to. In short, the pressure is on Illinois Tool Works to deliver in the third quarter. 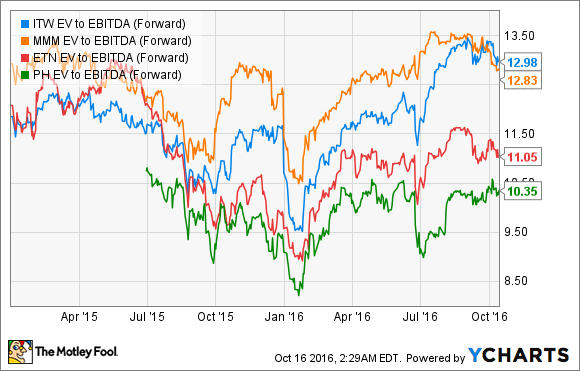 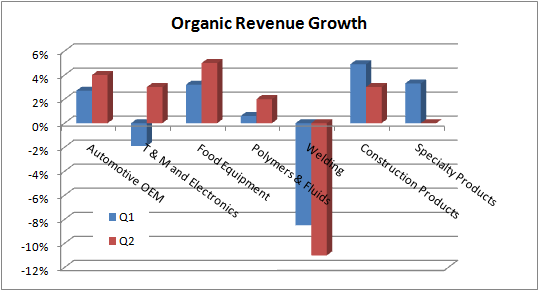 3 things to look out for

The most important drivers of Illinois Tool Works' stock price will probably be its automotive, welding, and test and measurement and electronics segments. The latter two have been the most problematic in recent times. In fact, in the last quarter the full-year organic revenue growth target was reduced to a range of 1% to 2%, compared with 1% to 3% previously, because of negative market conditions in the welding segment.

Meanwhile, test and measurement has only just returned to organic revenue growth. 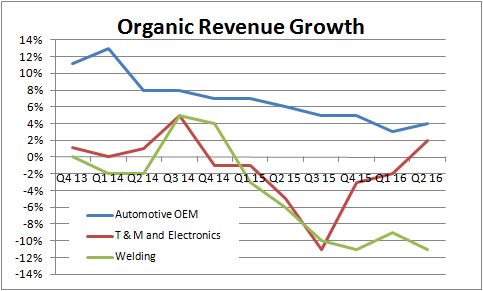 There are three key things to focus on.

First, welding's weakness is related to the slowdown in energy and heavy industry capital spending. The bad news is that stocks across the industrial sector continue to disappoint with their energy-related earnings. To pick just three companies, 3M Company reduced expectations earlier in the year, largely as a consequence of weakness in its electronics and energy segment, while General Electric Company and Dover Corp. have also reduced expectations because of weak oil and gas-derived revenue.

Third, test and measurement and electronics needs to confirm that it's back to growth after a period of cyclical weakness. The segment's margin expansion has been impressive, but as the preceding chart indicated, it's only recently gotten back to organic revenue growth. 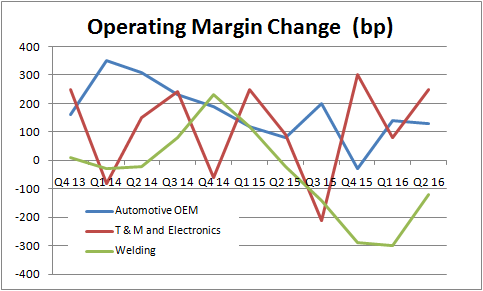 Where next for Illinois Tool Works?

The stock's valuation is a reflection of the good work management has done to expand margin in the face of moderate growth conditions. However, in the next set of results the company needs to convince the market that the automotive segment's current growth rate is sustainable. Meanwhile, indications from other companies suggest that its welding segment could disappoint again.

All told, the stock's valuation is now putting a lot of pressure on management to deliver, and any disappointment could to lead to significant downside pressure.