Netflix (NASDAQ:NFLX) stock is having a remarkably volatile year in 2016, and the bulls are clearly winning the battle versus the bears. As of the time of this writing, Netflix has gained nearly 30% in the last month alone, mostly due to rock-solid financial performance during the third quarter of 2016.

Outperforming where it counts the most

It all starts with subscribers. If Netflix is going to deliver growing sales and earnings over time, then the company needs to continue bolstering the subscriber base at a vigorous rate. Subscriber numbers in the second quarter came in considerably below management expectations, and this was obviously a major reason for concern among investors in the company. In this context, the fact that user growth was higher than anticipated in the third quarter was arguably the main positive factor in the report.

The company ended the third quarter of 2016 with 86.7 million streaming members, outperforming management's guidance for 85.5 million subscribers. Growth was above expectations both in the U.S. and in international markets. Netflix gained 0.4 million new members at home versus 0.3 million expected by management, and the company added 3.2 million international subscribers versus management forecasts for 2 million net additions. 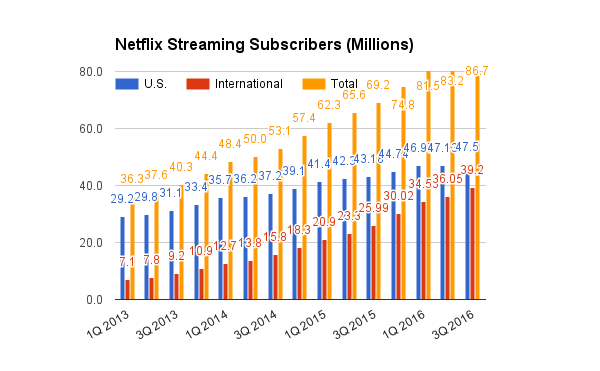 The company started "un-grandfathering" subscribers in the U.S. and other big markets in April of this year, meaning that Netflix is implementing a price increase for long-tenured customers that was already announced for new members two years ago. This is taking a toll on net subscriber growth, and customer defections were higher than expected in the second quarter.

Management said in the letter to shareholders that the company has already un-grandfathered 75% of the customers who need to be un-grandfathered, and this is having a positive impact on prices, as the average subscription price grew 10% year over year during the quarter.

On the back of healthy subscriber growth and rising average prices, Netflix produced $2.16 billion in revenue during the third quarter, growing 36% versus $1.58 billion in the same quarter last year. On a constant-currency basis, revenue increased 39%.

Contribution margin is basically the profit margin that Netflix makes on revenue after covering content costs and marketing expenses. The metric excludes items such as general and administrative costs and technology expenses. While contribution margin doesn't really tell the whole story regarding income and costs, it shows operating performance for each segment before global corporate expenses, so it can be a valuable indicator to evaluate how the business is performing in different divisions.

Streaming contribution margin at the whole-company level was 18.8% last quarter, an increase versus 17.5% in the third quarter of 2015. Nevertheless, things are remarkably different when considering profitability in the U.S. and in the international segment.

The U.S. market is maturing, and Netflix is proving its ability to drive expanding profitability in this market. Contribution margin in the U.S. reached 36.4% in the third quarter of 2016, a substantial increase versus 32.4% in the same period last year. Looking into the future, management believes the business is well on track to generating a contribution margin around 40% of revenue in the U.S. by the year 2020. 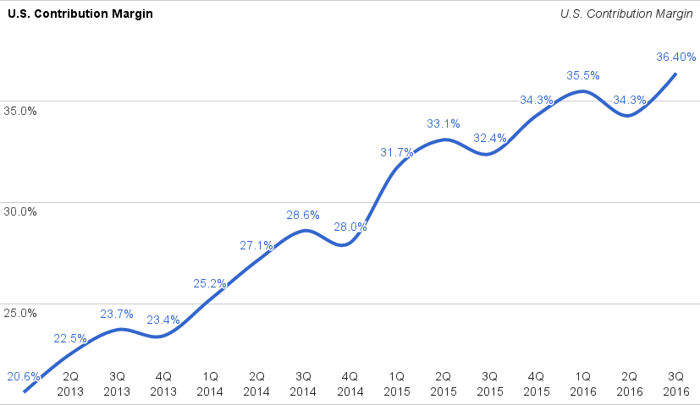 The international segment is a very different story, though. Netflix is investing aggressively for growth in the international arena, and this means increasing expenses for the business. Contribution margin was a negative 8% in international markets last quarter, and chances are that the company will continue operating in the red over the midterm.

A market leader in a promising industry

Online TV is clearly an attractive market, and Netflix is facing rising competitive pressure in the industry. Amazon (NASDAQ:AMZN) is planning to double its spending on video for its Amazon Prime platform in the second half of 2016, and Alphabet (NASDAQ:GOOG) (NASDAQ:GOOGL) launched its first paid YouTube subscription service called YouTube Red last fall.

In Netflix's letter to shareholders for the second quarter of 2016, management referenced the following chart from Sandvine, which shows that Netflix is the undisputed leader in the industry as measured by download internet traffic. 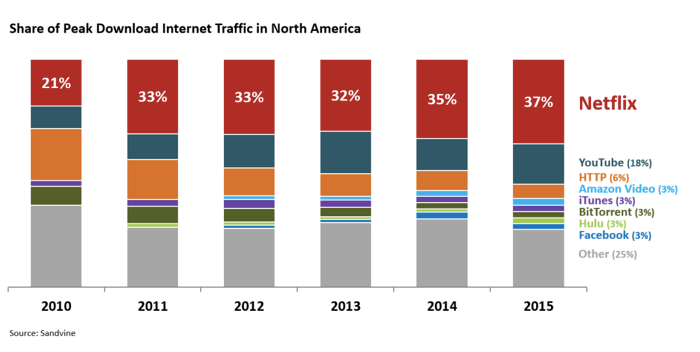 The chart measures peak megabits as opposed to viewing hours, so it doesn't necessarily reflect how viewers distribute their time across different alternatives in the industry. Nevertheless, it's hard to argue the fact that Netflix is a leading player in a growing industry.

To wrap up, Netflix is producing impressive growth in both users and revenue, profit margins in the U.S. are moving in the right direction, and the company is the top dog in online TV. Considering these factors, it's easy to see why Netflix stock is firing on all cylinders.