Cybersecurity firm Fortinet (NASDAQ:FTNT) has fallen 13% over the past month, with most of the decline occurring after it pre-announced its third quarter earnings on Oct. 11. The numbers initially looked decent -- the company expects revenue to rise 20% to 22% annually, while billings should improve 14% to 16%.

However, both estimates were reduced from higher guidance, and represent a significant slowdown from its 30% revenue growth and 26% billings growth in the previous quarter. It would also represent Fortinet's slowest year-over-year sales growth since the fourth quarter of 2013. CEO Ken Xie attributed that slowdown to longer deal cycles, sluggish enterprise spending, sales execution challenges in North America, and macro challenges in Latin America and the U.K.

However, Xie declared that the company remained "confident in the underlying strength of our business and long-term growth opportunity, and committed to delivering returns to our shareholders." The company also boosted its share buyback plan by $100 million to $300 million. Should investors take advantage of Fortinet's recent swoon to start a position? Let's take a closer look at Fortinet's business to find out.

What does Fortinet do?

Fortinet is the fourth largest network security appliance vendor in the world after Cisco (NASDAQ:CSCO), Check Point (NASDAQ:CHKP), and Palo Alto Networks (NYSE:PANW), in that order. Fortinet serves over 280,000 customers worldwide, including the "majority" of the Fortune 500.

The bear case against Fortinet

Palo Alto is also growing its market share at a faster rate than Fortinet. IDC reports that between the second quarters of 2015 and 2016, Palo Alto's share of the network security appliance market rose from 9.3% to 12.1%. During that period, Fortinet's share grew from 8.2% to 9.8%.

But even Palo Alto hasn't been growing fast enough to satisfy investors -- that's why the stock has declined 16% this year. If Palo Alto's growth rates are considered mediocre, it's doubtful that investors will embrace Fortinet's slower growth and smaller market share.

Fortinet also isn't consistently profitable on a GAAP basis. It reported a GAAP net loss of $1.4 million last quarter, compared to a profit of $0.8 million in the prior year quarter. Like Palo Alto, stock-based compensation (SBC) expenses are a major weight on Fortinet's bottom line, gobbling up 22% of its revenue last quarter.

The bull case for Fortinet 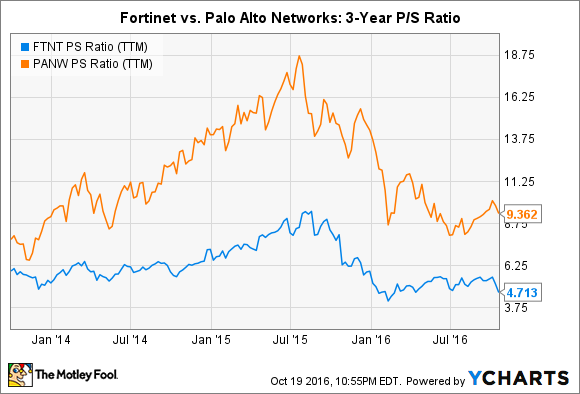 Fortinet is also selling more subscription bundles with its hardware to boost its gross margins. That effort has clearly paid off over the past two years. 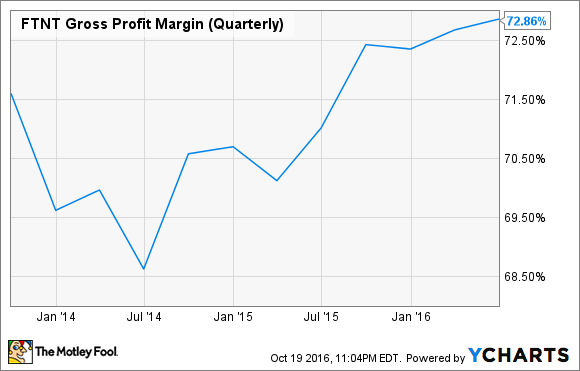 Meanwhile, Research and Markets estimates that the global market of security appliances will grow at a compound annual growth rate of 11.4% between 2016 and 2020, fueled by an increase in data breaches.

While Fortinet's annual sales growth is slowing down, it's unlikely to drop to the single digits for the foreseeable future. With an enterprise value of $4.4 billion and a clean balance sheet, Fortinet could also be a lucrative takeover target for larger players like Cisco.

Is it time to buy Fortinet?

I believe that Fortinet's lower valuation and consistent margin expansion make it a more compelling buy than Palo Alto. But I also believe that the market for firewalls and threat prevention solutions is a crowded one, and that Fortinet may struggle to keep pace with its larger rivals over the long term.

Therefore, I would avoid Fortinet unless its sales growth accelerates again. Until that happens, Fortinet will likely remain under pressure as investors focus on higher-growth plays in the cybersecurity sector.