Shares of Palo Alto Networks (NYSE:PANW) have declined nearly 20% in 2016 because of ongoing concerns about its slowing sales growth and widening losses. However, I believe that the cybersecurity company could face even more pain ahead, because of five red flags.

Palo Alto's sales rose 41% annually to $400.8 million last quarter, beating estimates by $11.1 million. However, that also represented a slowdown from 48% growth in the previous quarter and 59% growth in the year-ago quarter. The company also recently hired a new head of sales, indicating that its previous sales strategies might have been ineffective.

Total billings, which include its reported and deferred revenue, rose 45%. That also represented a slowdown from 61% billings growth in the previous quarter and 69% growth in the prior-year quarter.

Looking ahead, Palo Alto expects its third-quarter revenue to rise just 33% to 35% annually, marking its slowest growth rate since its market debut four years ago. Analysts expect Palo Alto's revenue to rise 33% this year and 29% next year -- indicating that its growth, while still impressive, is slowing down.

Palo Alto provides next-gen firewalls to over 34,000 customers in over 140 countries, including 85 of the Fortune 100 and half of the Global 2000. It added over 1,000 customers per quarter for 19 consecutive quarters, and Gartner ranked it as an enterprise firewall market leader for the past five years. However, the market for services that monitor the perimeter of networks, such as firewalls and threat prevention solutions, has gotten crowded over the past few years.

Fortinet (NASDAQ:FTNT) and Check Point Software (NASDAQ:CHKP) are both fierce direct competitors in firewalls. Fortinet serves over 280,000 customers worldwide, including the majority of the Fortune 500, with its Fortigate firewall. Check Point provides its firewall to over 100,000 businesses and millions of users worldwide.

Meanwhile, larger tech companies are bundling firewalls into their products to reduce the need for standalone solutions like Palo Alto's. Networking giant Cisco Systems (NASDAQ:CSCO) offers next-gen firewalls, while IBM (NYSE:IBM) bundles intrusion prevention systems into its IT services, software, and hardware. These competitors could force Palo Alto to reduce prices to protect its market share.

That competition is also forcing Palo Alto to invest more heavily in R&D, sales, and marketing. That's why its operating expenses soared 41% annually last quarter, merely matching its sales growth and gobbling up 86% of its total revenue.

But as I mentioned in a previous article, investors should pay closer attention to the company's GAAP earnings, since its SBC expenses consistently swallow up a huge percentage of its revenues and probably won't decline anytime soon.

Buying back stock usually indicates that the company's growth days are over, because it can't find any new places to invest its cash. But that's precisely what Palo Alto did last quarter, when it authorized a $500 million buyback plan through Aug. 31, 2018.

But as I recently argued, the buyback doesn't help investors because it was likely engineered to offset the company's massive stock dilution from SBC and a secondary offering over the past few years. 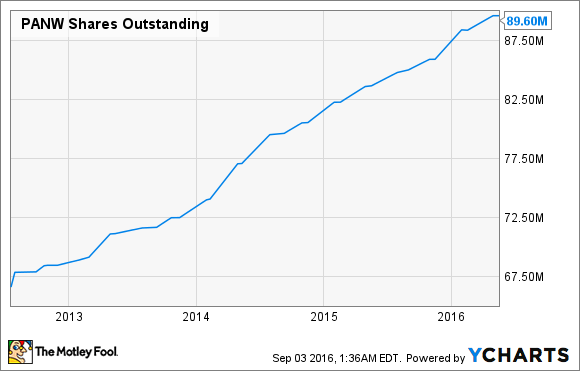 That move should frustrate investors, since Palo Alto isn't using SBC because it lacks an adequate cash flow. At the end of the year, its full-year free cash flow rose 85% to $585.6 million, while its cash and equivalents position nearly doubled to $734.4 million. That means that instead of buying back stock to offset SBC, Palo Alto could be funding more of its employees salaries in cash or buying other companies to get its sales growth back on track.

If a company's insiders believe that its best days are ahead, they typically buy their own stock. However, Palo Alto's insiders sold 5.53 million shares over the past 12 months but bought fewer than 886,000 shares. Over the past three months, insiders sold over 100,000 shares but didn't buy any shares.

Wall Street falls out of love quickly with high-multiple stocks that are experiencing slowing growth. Palo Alto's P/S ratio of 9 isn't cheap relative to many of its cybersecurity peers, and these five red flags could limit the stock's upside potential. I still consider Palo Alto a best-in-breed cybersecurity play, but it could be tough for the stock to continue rallying as strong as it did over the past four years.