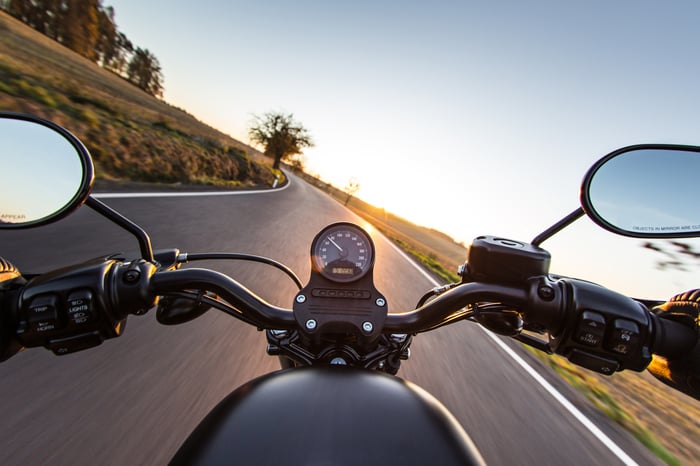 Sometimes the market rewards stocks for simply doing better than their poor projections suggest they would, which isn't necessarily a bad thing. That was definitely the case with Harley-Davidson's (NYSE:HOG) third quarter, when revenue, net income, and earnings per share declined across the board, yet its stock price jumped nearly 10% after the information hit the market. Let's take a look at the data and see if there was really that much to cheer about, or if investors are just seeing the glass half full.

Harley-Davidson's top-line revenue declined 3.2% during the third quarter, compared with the prior year, to $1.27 billion, which was at least ahead of analysts' estimates of $1.09 billion. Third-quarter net income took a more drastic plunge, dropping nearly 19%, to $114.1 million, which took Harley-Davidson's earnings per share down 7.2%, to $0.64, in line with analysts' estimates.

Despite a tough quarter, management remains confident business will rebound.

"We continue to effectively navigate a fiercely competitive environment and an ongoing weak U.S. industry," said Matt Levatich, president and chief executive officer of Harley-Davidson, in a press release. "We are pleased with the positive results and the enthusiasm we've seen for our Model Year 2017 motorcycles, featuring the new Milwaukee-Eight engine. We are confident that the entire line-up will drive retail sales growth for the remainder of 2016 and position us well heading into the spring riding season next year."

Harley-Davidson's cash pile shrank as well. During the first three quarters of 2016, the company generated $927 million of cash from operating activities, down from more than $1 billion for the same period in 2015, and its cash and marketable securities totaled $795 million at the end of the third quarter, down from last year's $1.42 billion.

In an attempt to shore up some of its financials, the motorcycle maker is planning to lay off roughly 225 salaried employees -- roughly 5% of its workforce -- before 2017 hits. According to the Milwaukee Journal Sentinel, it will cut about 70 contractors as well. The moves will cost Harley-Davidson about $25 million up front due to separation and reorganization costs.

Ultimately, Harley-Davidson didn't have a great quarter, but its moves to streamline its operations, cut costs, and improve inventory levels will help its business next year -- moves that investors cheered more than HD's third-quarter performance itself.

However, looking long term, the truth is that while HD has one of the most powerful brand images on the planet, its core demographic is aging, and that could continue to weigh on already weakening demand. Furthermore, competition such as Polaris Industries continues to produce compelling products and could steal younger customers that Harley-Davidson desperately needs to bring into its consumer base. Despite investors agreeing with the company's business-improvement moves and sending the stock up 10% Tuesday, there are too many question marks surrounding the company's core business in the near term, in my opinion.