Nike (NYSE:NKE) has had somewhat of a rough last year. Almost immediately following CEO Mark Parker's announcing the ambitious goal to reach $50 billion in annual sales by fiscal year 2020 -- a 63% increase over fiscal year 2015 -- sales started to slow. Over the next couple of quarters, gross margins started declining, dropping 200 basis points to 45.5% in the most recent quarter. 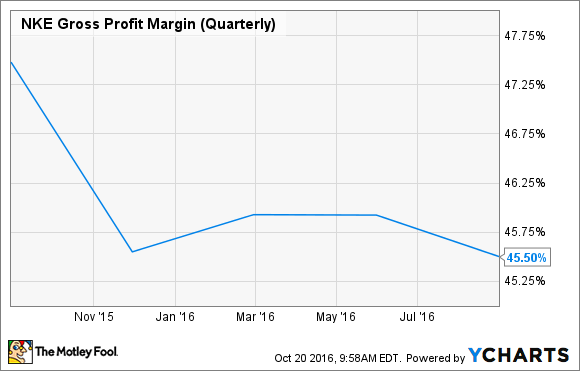 Nike's bloated inventory isn't as bad as it looks

Higher-than-needed inventory led to product price discounts, which was blamed for much of the gross-margin pressure in the last few quarters. Even though this quarter looked especially bad for gross margin, there are good signs that inventory levels aren't as bad as they look right now.

There is still work to do

Still, clearing out excess inventory from last quarter into this one has certainly hurt gross margin, which (along with increased demand generation costs) helped push operating profit down 11% year over year. Nike actually posted a sizable increase to net earnings, but that was due to a tax benefit that reduced the company's effective tax rate to just 2.5%. That means that, in the quarters to come, Nike's operating profit is going to need to increase to keep EPS growth stable this year.

Having a strong gross margin is important in this aspect. One way Nike has been able to grow earnings in the past few years is by increasing the average selling prices of its products, as well as getting more sales through direct-to-consumer (DTC) channels as opposed to through third-party retailers that take a cut of the sale. The resulting higher gross margin allowed for more revenue to make it to the bottom line.

Nike management noted in the call that inventory levels in certain places, such as Western Europe and China, are already normalized, and that inventories for their DTC business look good. Toward the second half of this year, they expect gross margins to return to normal worldwide.

"We also made great progress against clearing excess inventory within the quarter and we're seeing the benefit of bringing new product into the clean, full price in-line channels," said Nike's brand president, Trevor Edwards, in the recent Q1 earnings call. "Looking forward, we will continue to manage the flow of product into the market as we expand on an already healthy in-line marketplace."

Inventory concerns could be a buying opportunity

For the first quarter of fiscal 2017, which ended on Aug. 31, Nike reported $9.1 billion in sales, an 8.3% rise year over year and a result above analyst estimates. It was a welcome jump from the 6% growth in the fourth quarter of fiscal 2016. Sales growth of 8.3% on such a large starting number is no small feat. Even in the face of incredible competition and a strong dollar making international sales (half of Nike's total sales) look especially weak when transferred back to dollars, Nike has put up great growth rates.

However, the stock is down about 20% over the last year. Watch in the fiscal Q2 earnings, expected in late December, to see if inventories continue to normalize and if gross margin can begin to tick back up. If they do, then Nike's long-term growth could be very much intact, making the current share price a valuable play.

Just remember that Nike's management warned investors in the Q4 call that Q1 gross margin would decline, but said that sales would likely pick up in the second half of the fiscal year as inventories were cleared out and channels normalized. If you believe management can complete their inventory goals in the second half of fiscal 2017, which the signs above show is probably doable, then Nike's current price could be a great opportunity to get into such a great company at a discount.