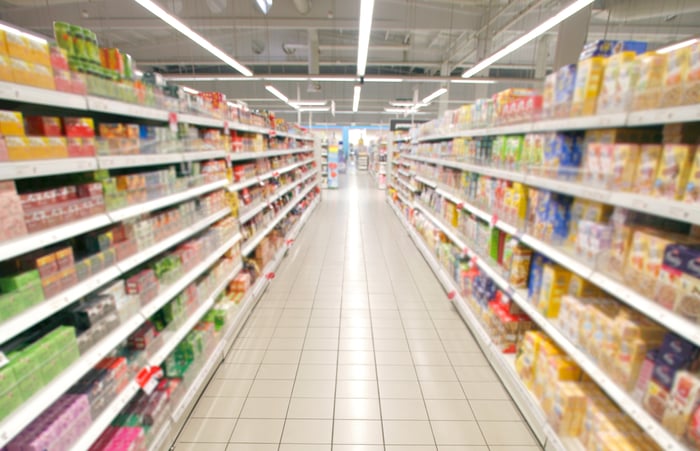 There's not much super about Supervalu (NYSE:SVU) these days.

The supermarket chain was once one of the biggest companies in the industry, but after a weak earnings report and news of another sale, shares are back in the penny stock range, trading below $5.

The company got a brief boost when it announced the sale of its biggest banner, Save-A-Lot, to Canadian private equity firm Onex for $1.37 billion. That's higher than Supervalu's market cap, but the difference seems to be more a reflection of the weakness in Supervalu's business rather than a high price for Save-A-Lot.  There are 1,368 Save-A-Lot locations, meaning the deal values each one at about $1 million, though 896 are operated by licensees. For comparison, Kroger (NYSE:KR), the biggest traditional supermarket chain in the country, has 2,781 supermarkets, and a market cap of $29.4 billion, meaning its grocery stores are worth about $10 million each.

Management said it would use at least $750 million of the proceeds to pay down part of its outstanding term loan, and the rest would go to reducing debt and funding corporate and growth initiatives. The company currently has $2.5 billion in debt.

Supervalu is in the midst of transitioning to a primarily wholesale business, and with the sale of Save-A-Lot it's left with a few smaller retail banners, including Cub Foods, Fresh Farm, and Shop n' Save. In 2013, the company sold five banners -- Albertson's, Acme, Jewel-Osco, Shaw's, and Star Market -- to a group of private equity investors led by Cerberus Captial Management for $3.3 billion.

Supervalu's shares surged after the 2013 sale, but those gains were short-lived. The retailer returned to modest profitability, but bottom-line growth has been stymied since 2014, and revenue has been slipping this year.

Supervalu's second-quarter report last week highlights the challenges the company is facing as it revamps its business. Overall revenue fell 4.8% to $3.87 billion; same-store sales were down more than 5% at Save-A-Lot and its retail chains. At its wholesale division, revenue slipped 5.5% to $1.73 billion, though it remains the biggest revenue generator of its three divisions. Adjusted earnings fell from $0.13 a year ago to $0.10.

Considering that the company will pay close to $200 million in interest expense this year, putting significant pressure on profits, a strategy to relieve itself of its debt burden makes sense. If it can trim its debt total by a third as it plans to do, the company would add about $42 million to annual earnings, increasing the bottom line by around 25%.

But the 5.5% decline in its wholesale business seems to call that plan into question. Like the rest of the supermarket industry, the company has been plagued by food price deflation, which has crunched margins and cut into sales and profits. However, its wholesale business was underperforming even before that development as sales have fallen five quarters in a row. Still, the wholesale segment remains the company's most profitable division with a 3.3% operating margin.

CEO Mark Gross has promised a turnaround in the second half of the fiscal year, saying, "We expect wholesale sales in the second half of this year to be higher than last year as we add new customers, grow our base business, and cycle select customer losses from last year." Indeed, the company has recently won two customer accounts, The Fresh Market and Marsh Supermarkets.

With Save-A-Lot out of the way, perhaps a sale of one or more of its smaller retail businesses would be the next logical step. Those banners are seeing revenue fall, and reported operating loss of $12 million in the most recent quarter, meaning a sale alone could generate a bump in profits and give the company more money to pay down debt.

The biggest risk in pursuing that strategy is that the company turns into Sears, the once venerable retailer that has sold off valuable assets in order to unlock value for shareholders. Along the way Sears ignored its core business, and it's losing hundreds of millions of dollars a year as customers have fled. The stock is now worth a fraction of what it used to be.

Supervalu's wholesale business remains profitable, but five straight quarters of falling revenue is a concern. If CEO Gross can make good on his promise to grow the business in the second half of the year, the company should be on a better footing come springtime.