It took Microsoft (NASDAQ:MSFT) a long time to recover from the bursting of the tech bubble. But last week, Microsoft stock landed at its first record high since 1999. The shares moved even higher on Monday, closing at a new record of $61.00. 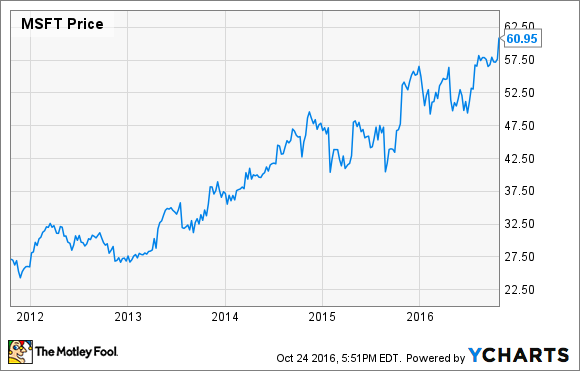 This stellar stock performance has been driven by rising investor enthusiasm for cloud computing. Microsoft is a big player in the cloud computing market. While it still trails Amazon.com (NASDAQ:AMZN) by a wide margin, its cloud business is bigger than those of its fellow tech titans, as well as pure-play salesforce.com (NYSE:CRM).

The recent rally has sent Microsoft stock surging to a lofty valuation of about 20 times forward earnings. However, most of Microsoft's income comes from mature, slow-growth (or no-growth) lines of business. That makes the company's pricey valuation look suspect.

Microsoft posted solid high-single-digit revenue growth in its productivity and business processes segment (which houses the Microsoft Office franchise) and in its intelligent cloud segment. Yet neither of these segments generated profit growth.

Instead, Microsoft's profit growth came entirely from its shrinking device business. The company is finally giving up on being a major player in smartphones, leading to smaller losses there. Eliminating those losses is driving a one-time improvement in profitability.

Furthermore, Microsoft's revenue outlook was somewhat disappointing. The company expects another revenue decline for the device business and slower growth in its other two segments during the current quarter.

There's a reason why Microsoft executives spend so much time talking about the cloud. It's because the company's legacy businesses don't have much in the way of growth prospects. (Last quarter, non-cloud software sales increased 2% year over year -- and that was considered a very good result!)

Some of Microsoft's cloud initiatives are cannibalizing its legacy business. Image source: The Motley Fool.

PC sales have already peaked -- and with it, revenue for the lucrative Windows franchise. To make matters worse, the stagnant PC market means that the Office franchise has limited growth prospects. Meanwhile, "big data" should drive growth in Microsoft's traditional server products, but they are being undercut by the rise of cloud computing.

Furthermore, in contrast to relative newcomers Amazon and Salesforce, not all of Microsoft's cloud revenue is incremental. Much of the growth of its prized "commercial cloud" revenue is being driven by companies moving to Office 365, which is cannibalizing sales of Microsoft Office.

So far, it seems to be a good trade-off for Microsoft. But even in a strong period like last quarter, total Office revenue (including both traditional installations and Office 365) rose only 8% year over year.

How much is Microsoft's Azure cloud business worth?

Microsoft's Azure cloud computing service is the company's main source of incremental cloud-related growth. In recent quarters, Azure usage and revenue have been rising more than 100% year over year.

Microsoft doesn't disclose how much revenue Azure generates -- just the year-over-year growth. Earlier this year, third-party sources estimated quarterly Azure revenue at up to $800 million. Let's suppose that Azure revenue has now reached $1 billion per quarter, or $4 billion a year. How much would that make the Azure business worth?

Salesforce, which is a pure-play cloud computing company and is growing sales about 25% annually, trades for about seven times revenue. Azure is growing more quickly, so it might be worth 10-15 times revenue today, or $40 billion-$60 billion. That's also in line with an analyst's estimate earlier this year that Amazon Web Services -- which is currently about three times the size of Azure -- is worth $150 billion.

Microsoft stock's recent rally has taken the company's market cap to a lofty $475 billion. The fast-growing Azure cloud services business may account for about 10% of the company's value. But that can only explain a small fraction of the stock's performance.

Clearly, investors have dramatically increased the value they assign to Microsoft's relatively slow-growth legacy business -- even though it produces less profit today than it did five years ago. 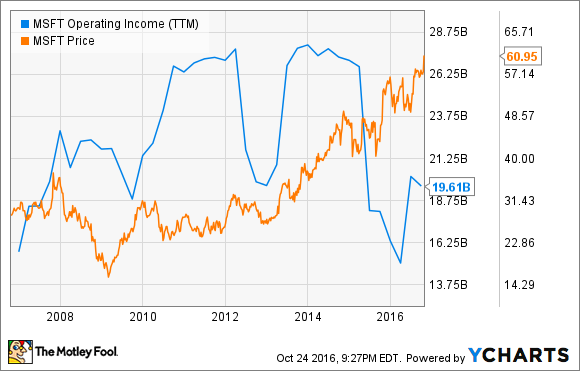 This seems hard to justify. The gradual migration of Office to a cloud-based platform may help Microsoft squeeze more money out of that cash cow, but this will probably be offset by declining revenue from the Windows business. Without strong earnings growth from these legacy businesses, Microsoft stock's explosive rise seems destined to flame out.