For most of us, the riskiest thing about trash is that a bag might break or we forget to put the garbage can out for its weekly pickup. For investors of trash hauler Waste Management (NYSE:WM), though, garbage -- and the way it's disposed of -- can hold additional risks.

Waste Management is a company with many strengths. And as a slow-and-steady stalwart company, the risks of major capital loss are few. That said, there are risks to investing in big trash haulers such as Waste Management and rival Republic Services. But one stands out as the biggest. 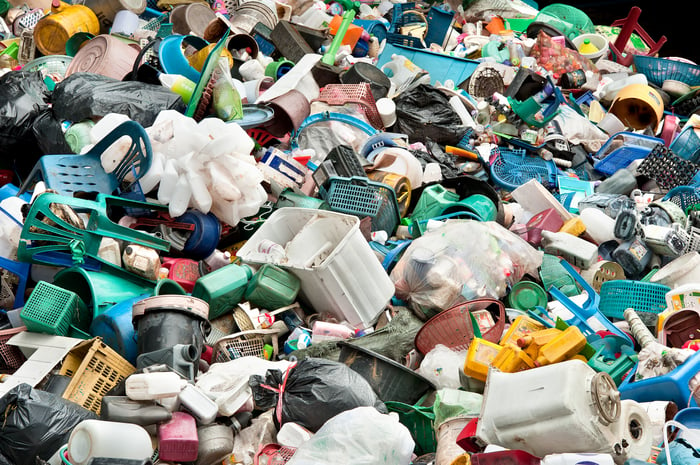 "Regulations" have become a political football during this election season. Regardless of how you feel about "regulations" in general, there's no denying that as waste haulers and landfill operators, Waste Management and Republic Services are subject to a cornucopia of federal, state, provincial, and local regulations in the U.S. and Canada. These cover almost every aspect of the companies' operations, including environmental regulations, health and safety rules, transportation laws, and zoning and land-use matters.

Despite all of this regulation, Waste Management and Republic Services have done quite well for themselves over the past 10 years. Both stocks have modestly outperformed the market and paid a dividend to boot: 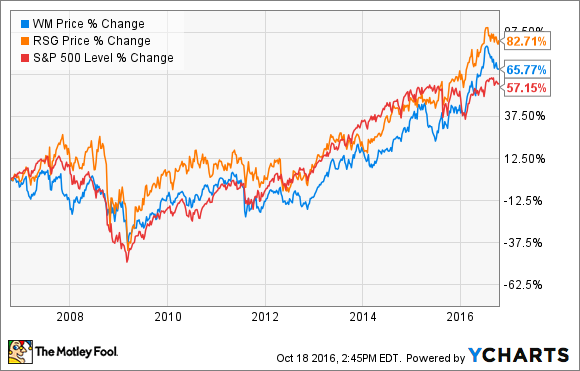 A state of flux

Waste Management's management believes that the regulatory environment has been getting more strict lately. "In recent years, we have perceived an increase in both the amount of government regulation and the number of enforcement actions being brought by regulatory entities against operations in the waste services industry. We expect this heightened governmental focus on regulation and enforcement to continue," the company wrote in its 2015 annual report.

And it's true that all of those regulatory statues have been variously amended and reinterpreted in the intervening decades. The U.S. Environmental Protection Agency is constantly issuing new and revised rules.

One recent rule change, for example, is an update to the 1996 New Source Performance Standards for landfills. Completed on July 15, 2016, the new standards lower the regulatory threshold for requiring landfills to install and operate a gas collection control system, from 50 metric tons of non-methane organic compounds per year to 34 metric tons per year.

Rule changes like this one could have an impact on Waste Management's operations. Landfills are a major source of greenhouse gases, and Waste Management owns more landfills in North America than any other company..

Given the already-high amount of regulation that Waste Management deals with, it's small wonder the company views additional regulation -- as well as potential consequences from existing regulation -- as a major risk to its investors' fortunes. But because the political winds can be fickle, it's impossible to tell what regulations might be enacted -- or, for that matter, repealed -- during the next president's term. Or, for smaller jurisdictions, the next state governor's, county board of supervisors', or municipal council's term.

It would be futile to list all the potential regulations that could have an impact on Waste Management's bottom line, but there are a few notable highlights. Legislation to curb greenhouse gas emissions would certainly affect the company, because its landfills are a major source of methane emissions, a greenhouse gas. Zoning restrictions preventing the company from acquiring permits to build new landfills or expand existing ones -- never popular with nearby residents -- could significantly increase the company's costs. U.S. and Chinese laws regarding the import and export of recyclables could hinder the company's sales of these materials.

Basically, if everything went wrong for the company from a regulatory standpoint, it would have a major negative impact on its bottom line. However, it's also important to note that some regulations could help the company, and not just through loosening or elimination.

Renewable-energy regulations could help the company by making the power it generates from its landfill methane more valuable on the market. Existing regulations about how energy by-products such as coal ash and residue from oil and gas exploration have created a market opportunity for the company to transport and dispose of these materials. So while regulation is a major risk for the company, it could also bring unexpected rewards.

It's impossible to know what new regulations will emerge in the next 10 years -- or even the next two years -- that might have a negative impact on Waste Management's bottom line. Even existing regulations, if interpreted differently, could cause problems for the company. That's why regulation is such a big risk for investors.

However, it's important to understand that not all regulation is bad for the company, and some of it is even helpful. Regulations affecting Waste Management's smaller competitors with less ability to invest in compliance, for example, would improve the company's competitive position (and possibly make them attractive acquisition targets as well). But the waste management industry is extremely competitive, and even though Waste Management is one of the largest players, it may not have room to pass on higher costs of regulatory compliance.

To date, regulations haven't seemed to put a damper on the company's steady increase in stock price. But before you decide to buy in, you should be aware of the risk.