The tech world never pauses to wait for investors to catch up. If you miss a trend, you can miss it big. The only consolation is that another one will likely take its place not too long after.

For investors looking to cash in on the next big thing, virtual reality (VR) and the Internet of Things (IoT) may be of particular interest. Both markets are seeing massive technology adoption by companies and both are still in their nascent stages.

Below are some stats laying out the opportunity for tech trends and how Facebook (NASDAQ:FB), NVIDIA (NASDAQ:NVDA), Sony (NYSE:SONY), InvenSense (NYSE:INVN) and General Electric (NYSE:GE) are making long-term plays in the respective spaces.

The case for VR

Virtual reality is getting a lot of attention lately, mostly because some of the world's most influential technology companies are making big investments in the space (more on that later).

Researchers at KZero estimate that by 2018 there will be more than 170 million active VR users worldwide, and TrendForce expects the overall virtual reality market to grow to $70 billion by 2020, up from just $6.7 billion right now.

Here's what VR user growth looks like over the next few years: 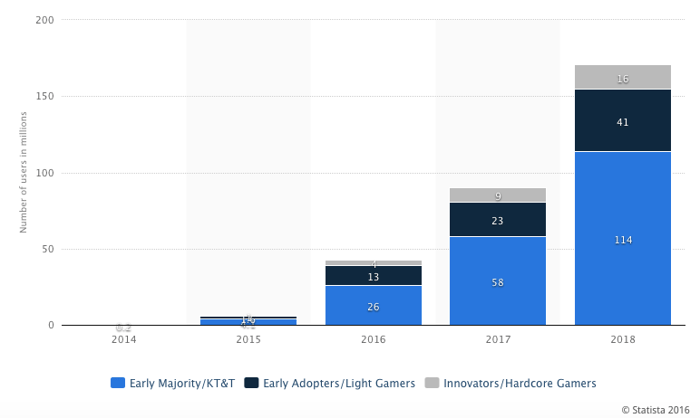 Sony, Facebook, and NVIDIA are all taking big steps in order to tap into this market. Facebook, you may remember, bought the VR company, Oculus, last year for $2 billion. And that purchase has become an inflection point for the rest of the VR world.

Re/code wrote earlier this year, "Since that deal was announced, the number of venture capital deals and total dollars invested in VR and augmented reality have both tripled, according to CB Insights."

Oculus just released its Rift VR headset that sells for $599, which puts the device near the top of the high-end VR market. That means it'll only have limited appeal for consumers right now, but Facebook is taking the long view on this one. CEO Mark Zuckerberg said last year, "It's important also to recognize that this is going to grow slowly, like computers and mobile phones when they first arrived."

Facebook isn't alone in pursuing VR. Sony just released its VR headset, but at $399 it's much cheaper than the Oculus Rift. The company is hitting the lower end of the high-end market at that price and could succeed in convincing its estimated 53 million (by the end of this year) PlayStation 4 console users to buy the headset.

IHS Technology estimated earlier this month that Sony's VR headset will sell 1.4 million units this year (remember, that's just a little over two months worth of sales), which would outpace sales of the HTC Vive headset and the Oculus Rift combined.

Sony has already partnered with 230 developers to help create VR games for its console and says that VR is a major area of growth for the company's future.

And last but not least, NVIDIA is emerging as a major player in the VR space, mainly because of its dominant position in the graphics processing unit (GPU) market. The company currently holds about 70% of the discrete desktop GPU market share, easily outpacing its rival, AMD. 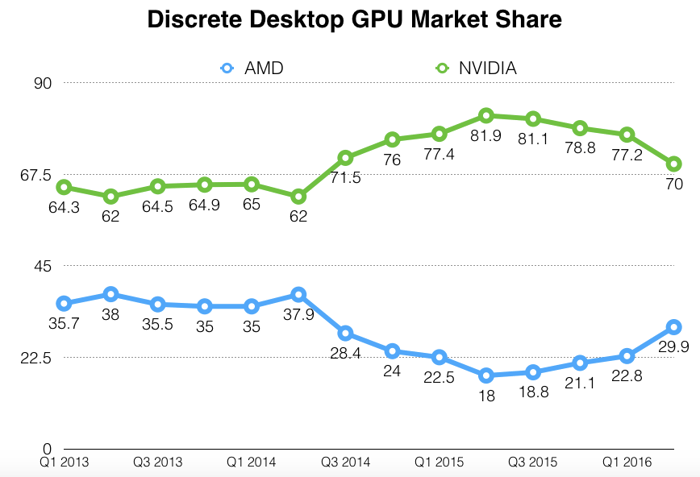 NVIDIA released three new graphics cards specifically for VR-ready notebooks over the summer and even created its own virtual reality game to show off how well its graphics cards can handle the technology. NVIDIA is likely poised for more growth for its GPUs and graphics cards as more PC companies and other tech companies develop new hardware and software to meet rising consumer demand.

The case for the IoT

The Internet of Things is, essentially, the connection of formerly unconnected things to the Internet so that processes can be automated and data collected (you can read an IoT primer here). Smartwatches are the simplest IoT example, as they take an old technology (watches) and add sensors like GPS, motion-tracking, microphones, etc.

Cisco predicts that by 2020 there will be 50 billion IoT devices, up from about 23 billion last year. Take a look: 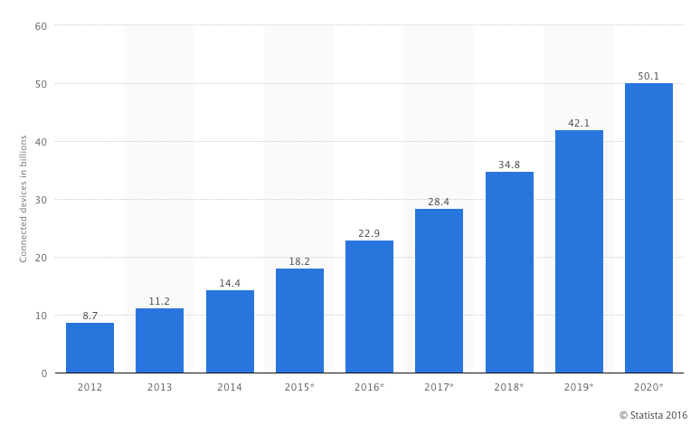 And all of those devices are going to create a massive market size. Cisco estimates that the overall IoT will be worth $19 trillion by 2025.

With so many devices coming online there are plenty of companies that are looking to capitalize on the IoT. But let's narrow it down to just two, very different companies and how they could benefit.

General Electric may not be the first company you think of to benefit from a major tech trend, but GE has been on the forefront of the IoT for years. The company makes its industrial equipment more efficient with a range of sensors and its own proprietary analytics software, called Predix.

GE's data-driven analytics software is already being used by large companies to do things like manage airline fuel usage, which is helping AirAsia save $30 million to $50 million in costs over a five-year period.

GE's software business brought in $6 billion in revenue last year, and the company says that could hit $10 billion by 2020. GE is using it's experience in the industrial sector to transform parts of its business into an analytical software business, and virtually no other company is doing it to the same scale as GE. CEO Jeffrey Immelt said last year that GE is on its way to becoming a "top 10 software company."

On a much smaller scale, InvenSense is trying to capitalize on its strong position in gyroscope motion sensors (which can be found in Apple's iPhones) by implementing them into IoT devices.

The company has relied on the mobile market for most of its revenue, but in fiscal year 2016 it doubled its IoT and Other revenue segment by getting its sensors in more wearables, smart homes, and connected automobiles. The IoT and Other segment now consistently represents 25% or more of the company's total revenue.

What's interesting for InvenSense is that the company is looking to the IoT and virtual reality for more sales growth. On the company's Q1 2017 earnings call in July, CEO Behrooz Abdi said, "In the gaming and virtual reality segments, or VR, we have extended our market share with our latest 6-axis motion sensor, and are currently ramping with a game controller at a tier-1 gaming OEM."

At an estimated $19 trillion by 2025, it's clear that the IoT market is much, much larger than for VR. But when it comes to the better investment, I think virtual reality may have the upper hand.

Both IoT and VR are still a bit of a gamble right now, but companies investing in VR should see tangible results very soon (i.e. Sony's headset sales and NVIDIA's GPU sales). To be sure, IoT companies will have measurable results as well, but much of the IoT's focus is in creating efficiencies for the enterprise market, not selling software and devices. That can make companies investments in IoT a bit more vague for investors, and harder to quantify.

Additionally, Facebook's purchase of Oculus jump-started many tech companies in to focusing lots of their attention and investments on VR. Every company from Alphabet to AMD is betting on VR right now, and that type of industrywide focus is likely to produce some good results for investors in both the short and long term.